Some heroes lose their luster when you get closer to them, or you find they’re are revered only by a select group of people and are hated by others.

The only leader I have ever seen internationally revered is Nelson Mandela.

I was a senior in high school (1981) when I first heard the cry of “Amandla!” (Power!)  The supplication of the people forming absolute resistance against Apartheid.  Later, it became the slogan of the ANC, the political party of Mandela. 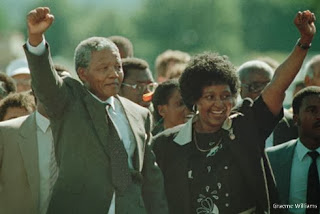 I never knew that years later I would actually live in South Africa, becoming inexplicably South African, myself.  In February of  1990, he was released and walked through the street with his (then) wife, Winnie, holding up his Amandla! Fist, signifying the beginning of a new South Africa.

We moved there sixteen years later, and instantly fell in love.  The South African culture is so unique, so powerful, in many ways it is like the U.S.A.   Most of the people were still in love with the liberator and the role model they now called Madiba (his Xhosa clan name).

The Apartheid Museum in Johannesburg has a permanent exhibit dedicated to him.  He loved knowledge and uplifted it, and the hall was a perfect tribute for him.  We toured it, once we arrived in Johannesburg and I lingered especially long.  There were so many displays, some type written papers of his, voicing his concerns for his people, explaining his understanding of God, searching for the words to motivate his country toward unity.

It was his example and strength that led everyone (his friends and former enemies) to unity.
Forgiveness.
Fresh Starts.
There will never be another like him.

Today I received word that he died and it made me “homesick” for our adopted country.  I know that there is great mourning there today, even though his death was a long time coming.

I will tell you a little international “secret.”  Madiba is joyful.  He loved to celebrate, but admitted many times that he was “no dancer.” He loved the celebratory culture of his people, the most natural dancers in the world, but said once that it exposed him as having “no rhythm.”

To join in, he chose a very beautiful movement that everyone now calls the Madiba Dance – a little rocking motion of the hips and slight pumping of the arms, a genuinely lovely thing that all South Afircans love to do.  It makes us love him more.

Posted by Brazen Princess at 6:50 PM