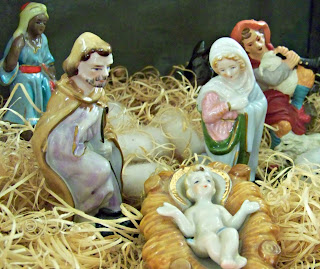 Sharon received the nativity set as part of her inheritance when her Nana died, leaving her a set of china and the old Christmas set that she and Sharon used to admire together.  Nana understood what it meant to the girl, as she turned each piece over in her small hands, noticing each piece’s detail and shiny glaze over the pastel colors.

Sharon unpacked it each Christmas with the same wonder, actually managing to pass on the same admiration to her three children, Rodney, Eric and Elsie (the only girl, named after Nana).  Each Christmas Ben would bring in the decorations, boxes of dusty baubles they had accumulated over the years.  Piece by piece, the family would unpack the stuff and transform their normal house into the lighted wonder that Christmas was.

Today, Sharon unpacked by herself.  Ben was always working and the kids had long since grown and moved away.  Rodney was always on a ship, Eric closed commercial real estate deals in Nantucket and Elsie was busy with four kids of her own.  It didn’t stop her from working full time and paying a Nanny.  Sharon wished she were closer so that she could help.

“It wouldn’t matter,” Elsie told her one day.

“Why do you say that?” Sharon tried hard not to be offended.

“They love their Nanny and they have their schedule.”

“Besides, you were the one who moved in the first place.”

Sharon did remember.  She loved Costa Rica and the people, so rich in culture and vibrant.  Hungry for God and what she and Ben brought in their own small way.

“Explain to your wife that it’s a men only trip this time,” she overheard the team leader say to Ben one evening at a planning meeting.  As she and the other wives laid out the mango and bread plate, she held back tears, knowing she would never really be part of the work they came to do.

Eventually, Sharon longed for home, especially to see the children born to her own children.  She longed to reestablish relationship with her own mother and father, who were growing older.  She missed her siblings.

Eventually Ben realized they were finished and they both returned home to Omaha, a city caught up in first-world pleasures.  Sharon wasn’t quite comfortable settling into life in America, but she didn’t want to seem ungrateful for their new home and the job Ben had returned to.

“Are you happy?” He asked her one evening as she finished cleaning the dinner dishes.  He was asking her after a day of visiting Elsie and the kids in nearby Dundee.  They had been happy to see her and were beginning to not forget her name: Nana.

“Yes,” she smiled.  Her own Nana had such an impact on her life and she wanted to have the same on her own grandchildren.

Back to the nativity set.

Sharon unpacked it, turning each piece over in her hands, noticing the paint and glaze on each one. She now knew that it was a mass-produced nativity set, available at any Sears and Roebuck when Nana was still alive.

Still, it was the Gospel.

A baby was born to a mother and a foster-father, far from home in the most humble of circumstances.  He was given a strange bedroom and a manger to lie in after his mother wrapped in swaddling, the traditional Jewish way to papoose a baby.

That baby, with the halo around his head, was born for all people, do deliver them from sin and death.
A tear escaped Sharon’s eye.

When did it all get so polluted?

After Ben and Rodney fought, their son had impulsively joined the Navy and now rarely called them.  She could count on one hand the times she talked to him while they were in Costa Rica. Each conversation was strained and Sharon knew it was all her fault.

This year, their Christmas card to Rodney came back, unopened.  Sharon was unsure if she had the wrong address or if Rodney had refused it at the Post office.  She didn’t have any contact details for him and Elsie said she was told not to share with Mom and Dad how to reach him.

Rodney had been badly burned by church, the people who were supposed to be safe.  They never quite looked at him with acceptance but only gave him funny nick names and a cold shoulder.  They encouraged Ben and Sharon to get counseling for their hyperactive son and they did, betraying his confidence as they subjected him to testing, analysis and the opinions of the most confused people they had ever met.

It wasn’t long before Rodney’s rebellion started and then the open fights with Ben.  He asked Rodney to leave one night, saying that he had the other children to think about.  Rodney was only too happy to go, saying they were the ones who were messed up.

In the end, Rodney was right.  His own issues were nothing compared to the issues that were in their church: Judgment. Razors. Exclusivity.  In the end, Sharon could see that the church wanted to evangelize more people who looked like they did.  Businessmen; stock-brokers; lawyers.

The manger holding the child with the halo grew warm in Sharon’s hands.

She placed it in the straw, covering the shiny legs with the curly shaved wood she bought from Hobby Lobby as soon as they returned to the states.  There was no Hobby Lobby in Costa Rica.

“There you go.” Sharon talked to the figure just like Nana used to.

Nana would speak like the figurines could hear her.  To the donkey, as she lay him  in layers of cotton balls  in the stable: “There, there.  You've had a long journey!  Rest awhile here.  You’re safe and warm now.”

Sharon unpacked each piece and stopped at Joseph, the foster-father of the baby.  He was holding a staff; Nana said he used it for walking all that way from Galilee.   He was kneeling down and looking adoringly south-west.  Nana always placed him over the baby, and Joseph was happy to kneel with his hand on his heart looking at his savior.

Did Joseph know, really that Jesus would eventually upset the government of Rome and be charged with sedition and shame his whole family?  Did he know, as he looked adoringly at the baby in the manger,  that he would be the pivotal person that would divide the  Jewish religion?  Did he know Jesus would make it possible for Jews to talk directly with God?  Speak his name?  Allow women in the Holy of Holies?
Sharon nearly dropped the figure when she heard the ringing of her cell phone.  It was Elsie, and she laid Joseph down to pick up her daughter’s call.

“It’s the first Monday in December and we always did it then, didn’t we?”

“No, why?”  Sharon wiped tears away, realizing only then that she was.  It was hopeless to try and hide from her intuitive daughter, who had always exhibited traits of a Biblical prophet.

“Have you gotten to the nativity set yet?”

“Yes.”  Sharon felt hot, fat tears leaving her eyes.  She knew better than to blow her nose or sniffle, giving away the grief she felt for everything.

“He’s going to call you today.”

“What?” Sharon reached for a tissue and wiped away her dripping nose.

“Rodney just called me and said ‘Do you think Mom is setting up the house now that she’s back?’”

“Yeah, he said he would.”  Elsie cleared her throat and got to the point of her call.  “Don’t start apologizing all over the place for years of stuff, Mom.  That’s just gonna freak him out.”

Sharon didn’t know whether to be offended or smile.  “I won’t….”

Sharon nodded, saddened and weak.  “You still love me, don’t you, my girl?”

Elsie sighed heavily.  “Mom, there’s not enough assurance in the world to make you feel better.”

The statement stung.  Sharon grimaced and tilted her head.  “When’s the last time you talked to Eric?”

“Did you get his email?”

“Yes,” Sharon didn’t think Eric’s last email was anything special.  It was just a recap of the last three deals that closed.  It assured him, he wrote, that he would have a Happy Christmas.

“Well, you know he’s coming to Omaha for Christmas, don’t you?”

Sharon was nonplussed and shook her head.  “Really?” she said out loud, realizing Elsie couldn’t see her.

“Yeah, he comes and sleeps over at my house, usually.”

“Maybe you can invite him.”  Sharon heard a shuffling on the other end of the phone and Elsie spoke up again.  “Mom, I have to go.   Remember to write that down on a piece of paper – right now before you forget.”

There was a click, then Sharon’s cat, Fifi appeared on the screen of her phone.

“Paper…” Sharon mumbled to herself as she rose to get a spiral bound notebook from the kitchen.  She found one with an old grocery list on it – one from Costa Rica.  “Mango, tea, sugar, bags.”

She smiled and a stab of pain came into her heart, remembering the beach church they had; all their friends and their children running around mish-mash everywhere.  How much Costa Rica had changed her.

She wrote in big letters: “DON’T APOLOGIZE FOR YEARS OF CRAP!”

She returned to the nativity set, laying her phone down on the spiral notebook, both within reach.  Later she would email Eric, inviting him to stay in their new guest room.  She knew she would have to clear a place for him; move boxes and clear off the old bookshelf.  Maybe when Rodney called she could invite him too.  It was a shame they didn’t have bunk beds anymore.

Sharon held Mary in her hands and remembered Nana’s voice.  “You’ve come so far.  You were nine months pregnant and had to make that journey on the back of a donkey.  Now when you got here, it wasn’t like you thought it would be, was it?  Where’s your bed?  Where’s your baby’s bed?  Can’t you get a little privacy?  Why is that cow looking at me?”

As if a mist descended,  Sharon could feel her Nana with her.   She could almost feel her touch; almost hear her whisper:

“Don’t worry, mija.  Everything will work out fine.  It’s Christmas.”
Posted by Brazen Princess at 1:12 PM