If you’ve never read a Christmas Classic out loud to your family, you're missing something that is truly amazing.

In the age of video games and television, we can understandably forgo reading for the classics that are "easier to enjoy" after a long day.  Don't get me wrong, I love “It’s a Wonderful Life,” “How the Grinch Stole Christmas,” and “Charlie Brown Christmas,” but there are greater classics your family shouldn't miss.

Eventually, the reader and the one being read aloud to will settle down for the tale.

Half the fun is hearing the “voice” of who wrote it – and how Christmas becomes the magical time that everything works out.

Tucked away on my bookshelf are the oh-so-readable classics that can never be neglected.

Today, I recommend them to you and your family before it’s too late and the Christmas season is over. 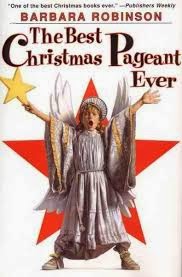 1.  The Best Christmas Pageant Ever by Barbara Robinson.

Without a doubt – my favorite to read out loud to my kids was this one.  I tried to keep a straight face most of the time, but I couldn’t.  When I wasn’t laughing, I was crying.

It takes place in a small town with an outlaw family: The Herdmans.  They are, as the sixth grade narrator calls them, “the worst kids in the history of the world. They lie, steal, smoke cigars, swear, and hit little kids.”

They invade church one Sunday – the same Sunday that the annual Christmas pageant is being cast – and decide to take over all of the roles.  Since none of the six Herdman kids had ever heard the Christmas story before, the director tells them the story  we all have heard and take for granted.  Mary (pregnant!) rides to Bethlehem on a donkey and can't find a place at the inn (What!).  Jesus (I wouldn’t have named him that!) having to be born in a stable (even Gladys had her own drawer!) the Wise Men (a bunch of dirty spies) and Herod (who needs a good beating) are all characters that should have acted differently.

What happens is miraculous.  The perfunctory pageant becomes the most unusual anyone has seen.
Robinson, a former teacher, knows what makes kids laugh and takes them down a road of unbelievable bullying, tension and finally redemption.

2.  A Visit from St. Nicholas by Clement Clarke Moore

‘Twas the night before Christmas and all through the house….  The long poem we all exploit is told here, and it is downloadable or available online free of charge.

So are recipes for  Sugar Plums,  patterns for “kerchiefs” and “sashes”.  You can research reindeer (originally seen as pests to most children who first read the poem) and the origins of Nicholas, the patron saint of Christmas.

No child should not hear this poem. The celebration of wonder is different from house to house, but the poem belongs to all of us. 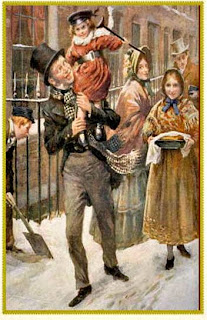 3.  A Christmas Carol by Charles Dickens

Marley was dead…. The best lines in literature come from Dickens.

Not so much has changed since Dickens wrote of his Ebineizer Scrooge, once a “good man of business” who has lost love for everything.  This tale tells of a greedy man can very well take place in our city today.

Scrooge has died slowly over the years and has come to treat mankind so coldly that it shrinks back from him.  He treats his one overworked employee, Bob Cratchit, so badly, that he cannot even provide for his family.  Without health insurance, his youngest  son is slowly dying.

This is also the story of Scrooge’s wake-up call, an invitation to re-enter the world.  Dickens saw Scrooge   as the “embodiment of winter” – and we watch as he attempts to melt his heart to the innocence and goodwill he had known in his childhood with his beloved sister.

Dickens is a master of creating characters – Scrooge, Jacob Marley, Bob Cracthit- and especially the three “ghosts” who endeavor to bring Scrooge to his senses, are all so real we can visualize them.  When all else has failed, Scrooge comes to realize that he is mortal and that all mortals are accountable to God, even the ones who don’t believe in his existence.

A short novel, I read this book even when it is not Christmas.

I cannot NOT recommend this terribly sad story of a young girl who sells matches on a freezing Christmas night.  It clearly reflects the author’s disdain of the way children were forced into virtual slavery in Europe in the 1700-1800’s.

The girl, who was unnamed in the original story, freezes to death while selling matches, but not before she sees pictures and images that give her warmth in the flames of spent matches.

If you do buy this book, make it a vehicle where your family can talk about what they can do for the poor homeless when it’s cold.  The forgotten victims of homelessness are the children and need to be remembered during the coldest holidays.

One of the most selfless, romantic Christmas tales that tells of newlyweds who exchange the presents that they know the other wants.

I love this story and read it out loud to a friends’ five kids the other day.  It begins this way: “One dollar and eighty-seven cents.”

I asked them all (under ten) “How much can that buy?”  Their faces were priceless and they said “Not much at all.”

O. Henry is one of my favorite writers and most of his work is common property.  This is also a downloadable story if you want to read it out loud.  In fact, here’s a link:

Christmas classics shouldn’t only be seen, they should be read out loud.  Most of these can be bought on audio if you want to play them on a long car trip.  All of them can be found at your local private bookseller.

If you don’t know who that is, find out.

Reading is power.  God bless us, everyone.
Posted by Brazen Princess at 7:55 PM