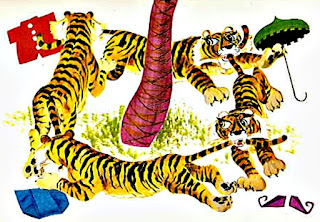 Stories are things that soothe us, stimulate us, make us laugh, cry, forgive and hope all in the matter of a few pages. William Shakespeare told good stories for the stage, still produced today.  In the past century, modern authors have seen their stories  adapted for the screen - and most of the time the book is better.

A good story sticks in our mind and forms a memory - usually attached to a sense (comfort, fear, love).

I remember my first story that stayed there – it was of a little boy named Sambo, a boy who meets four hungry tigers on the way to school.  He gives to one his shirt. To another his pants (Sambo had a diaper on underneath in my book),  to the next his shoes, and to the last his umbrella so they will not eat him. The tigers in the story began to show off for each other, each saying they looked the best.  In fury and frustration, they end up fighting and eventually chasing each other around a tree until they churn themselves into butter.

Sambo (who has encouraged the tigers to fight) picks out his possessions from the churned butter, then  and scoops the butter to bring home to his mother.  At the end of my picture book, Sambo’s family are all eating stacks and stacks of pancakes – smothered with the butter.

The story of Sambo has since been banned because it is 1) Politically incorrect (Sambo was black - the word "sambo" has since been considered a racial slur); 2.) encourages animal cruelty (turning tigers into butter is mean); and 3.)lacking in educational value, (other than the educational fact that butter is good on top of pancakes).

Stories don’t  have to make sense.

The ones that stick in our hearts have characters who are clever, frightened, weak, vulnerable and think well under pressure.  They encourage us to root for them as they navigate the rough waters of their predicaments, and cause us to cheer when they prevail.  They remind us that revenge is sweet, beauty is in the eye of the beholder and good should always triumph over evil.

Sometimes they just make us hungry (I remember lying in my bed after the story of Sambo and thinking that I would do anything for some pancakes right now).

Jesus spoke to people in parables (stories)  to explain the Kingdom of God.  The deep truths in life are better disguised so that people make their minds up themselves.  It is good to have part of your heart attached to a story so that your future decisions can be shaped by its message.  Aesop called this a fable.  Jesus called it a parable.

Today is the November 1 - the beginning of National Novel Writing Month (NaNoWriMo) and I am embarking on writing a novel in one month.  This will require two hours of focused writing a day.  My novel (at the end) will be rough, unedited and ready to revise.

Care to join me?

If not, let this month encourage you to write - a daily writing prompt will appear for an idea for a story that will be birthed in your head.

A good story begins with someone we care about.  They usually find trouble right away – or they’re already in trouble.  They are ill-equipped to handle their trouble and often they seek out the wisest person they know.

This is the beginning of Great Expectations, Seven Samurai, The Outsiders and each of the Star Wars books.

Begin with an idea...but make sure that trouble is close at hand.

Daily Writing Prompt:
Write a short story about a child who is lonely until he/she meets an unlikely friend.
Posted by Brazen Princess at 12:42 AM