The first book I ever read all the way through by my own free will was one called “The Gift of Magic” by a young adult author, Lois Duncan.  I was twelve years old and we were about to make a trip across country to Boston, the land of my father,  in our yellow station wagon with my parents and four siblings.  The thought of me reading anything in a car (my parents referred to me when talking about the trip as “the one who gets carsick”) surprised everyone, even me.  But I was determined and bought the book myself with money I had saved myself.  I carefully removed the order form from a Scholastic book flier with a pair of scissors I found in our kitchen.  The book arrived at school and had a shiny, attractive cover with a young girl day dreaming and pouring forth painted thoughts.  It was one of two books I read that summer and then I was known as “the one who likes to read”. 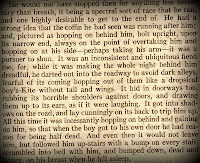 Two summers later, just to prove I was smarter than everyone around me (I wasn’t, by the way) I read “Tale of Two Cities” by Charles Dickens. My father was proud, remarking that it was time I started reading “authors that are important”.  The book was remarkably English (a foreign language for Americans) and harder to read.  My thoughts would drift as I read the pages, its characters a little to veiled for me to understand.  It wasn't until much later that I would read it again and appreciate it, like all of Dickens' books.

Years past and reading became more necessary than pleasurable.  I read cookbooks to master the ways of my mother and mother-in-law in the kitchen; the Bible to reprogram my mind as I started a new life; Shape magazine to survive being married to a jock husband who looked good all of the time.  I also read a lot – a LOT – of Christian self-help books.  My favorite author was a man by the name of Mike Wells, who wrote two standards I always return to: Sidetracked in the Wilderness and Problems, God’s Presence and Prayer.

One day I saw the movie “Sense and Sensibility”, so beautiful in conversation that I knew I would have to get the book.  We marched to the used book store I haunted and picked up a hard-copy while my kids chose a few themselves.

Sense and Sensibility did not require concentration.  It was brilliant and juicy and I loved Jane Austen for writing it.  Written in a post-Victorian era, there was no reason I should have related so well to Marianne, the tragic sister who lives a life with her heart attached squarely on her sleeve.  I finished the book slowly but enjoyed every page.

I later returned to the same bookstore (my haunt while in Sacramento) to buy the greatest literary purchase I would ever make: Leo Tolstoy’s War and Peace.  If I could read War and Peace, I could read anything.  The book store owner recommended the Penguin Classic, which she told me was translated from the original Russian and French by a master: Rosemary Edmonds.  In her opinion it was the best translation available- she couldn't believe no one had bought it off of her shelf yet -but it was a new copy, not used.  The price tag was a whopping nine dollars, but I bought it.  Thank God.

War and Peace took me a year to read, three months to become interested in.  Want a heads up?  Leo Tolstoy plays around for the first third of his books like an old uncle who is going to tell you a story but spends too much time talking about nothing.  BUT once the old uncle entered the second third of the story I was thrown to the ground with events that couldn't possibly have happened (did I read that right?) and was wide awake for the last two thirds of the novel.  After finishing War and Peace, I realized I had unintentionally learned about the Napoleonic Wars and how the world (and war itself) would never be the same after them.  How did Uncle Leo do that?

After War and Peace I ran a marathon.  It inspired me to take on things that took time to acheive.

Many books followed.  Jane Austen's Pride and Prejudice, Charles Dickens David Copperfield (my son read it before I did), Leo Tolstoy's Anna Karenina (a book that nearly sent me into depression),  Naguib Mahfouz's Cairo Trilogy; James Joyce's Dubliners; and then a sneaky girl named Amy Tan (who was still alive!) made her way into my heart (past the dead legends) with Joy Luck Club and The Hundred Secret Senses.

They lived at my bedside, reminding me that words were beautiful and made pain understandable and life translatable if you could swallow the words and felt them deep inside. Their characters were all people I had met before in my life and I loved and hated them and cried out for justice in the pages where they lived.  Inside of their pages was beauty - words twisted into patterns that evoked deep emotions, calling forth my interest like all good authors do.

At the airport last week I perused the novels section, the popular fiction that is selling right now.  Having just finished my first novel, I am encouraged by everyone I know in the publishing industry to take a look at what is “selling”.

I looked at a stacked tower in the middle of the bookstore entryway where I saw the pesky 50 Shades of Grey. The tower was stacked and already half gone.  I had heard about this novel, the one that aspiring authors (and established ones) love to hate.  Sir Salman Rushdie (author of The Satanic Verses) admitted last week that one of his least favorite books is 'Fifty Shades of Grey', saying that it makes the Twilight series look "look like 'War and Peace'." Ha!  I looked inside of its pages for beauty, a colorful scene or conversation that would drag me in.  Instead I found words pieced together like an essay from a high-schooler - something I would read at a bargain table two years after the store had tried to sell all of its copies.  I was bored leafing through it. 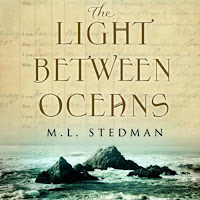 After I put it down I noticed a new novel- The Light Between Oceans  by M.L. Stedman, mainly because its cover (a nautical script watermarked behind jagged rocks) caught my eye.  I picked it up and couldn't put it down.  I read the first pages and delighted in the sounds and smells it painted.  Inside of the front flap I saw it was the author's forst novel and would soon be made into a motion picture.  I sighed, glad for her - it looked like a really good story.

I left the airport bookstore and returned to Mario, who was waiting for our flight in a long line of people.  There had been a delay and everyone was camping out in the few remaining chairs.  “Can I borrow the computer?” I asked him.  He was busy on his ipad and instead of getting out our laptop, handed the tablet  to me.

“You should have wi-fi,” he said.  Instead of feeling guilty for hijacking his ipad from him, I worked fast.  The Light Between Oceans was available from amazon for a much reduced price, but I decided I'd rather buy it from an indie book store once I got home.  It also was available on kindle (I adore my kindle) but I never buy a book that I know I want to hug when I’m finished as an e-book - and I suspected this would be one of them.

Good reads, like easy reads have a place in my heart.  There is much to be learned from the classics but I am learning to enjoy the moderns.  I have recently bought several books from people who are still alive.  People who (like Amy Tan) can tell a riveting story that leaves you loving the characters and loving them like brothers and sisters. There is something of light and promise inside of a story.  Barbara Kingsolver says "Give me ten hours and I'll give you a reason to turn every page."

Whether its Dickens or Dostoevsky; Austen or James; Tan or Paton...I love them all.

I love them for telling me a story before bed, just like my mom used to do.  A story that sets me free and makes me question and causes me to be more tender to people I don't understand.  A story that tells me that people are worth it, families are complicated and God is there, in all of the twenty six characters that breathe out beauty inside of white pages that used to be empty.

Lois Duncan's YA book that made me a reader is still available for purchase - believe it or not!

Mike Wells' Masterpiece, Sidetracked in the Wilderness and Problems, God's Presence and Prayer can be found here

Sense and Sensibility began a life-long love affair with Jane Austen's writing - get it here.

To order the classic War and Peace with Rosemary Edmond's translation - click here to see a list of sellers.

My two copies of Joy Luck Club are falling apart - it's that good!

The Light Between the Oceans can be found here- amazon makes it so you can preview the first few pages!

To see my favorite used bookstore in the whole wide world, click here for my Sacramento hangout

Yes, Salman Rushdie really said that about 50 Shades of Grey!!

To read what inspired this blog, click here to read the Rumpus post about the comfort of "bad books"

Posted by Brazen Princess at 3:05 AM