I want to tell you a story of water.  It is a simple story, one that I could add a bunch of application and wisdom to, but I don’t want to.

Yesterday was my weekly date with Bessie, my friend who I have had weekly dates with for a few years.
When I called her she told me that she had no water – Diepsloot extension 1 had no running water at the community tap.  Instead of lunch she asked if I could take her to fill buckets at a local tap.  Of course I agreed.

After hanging up with her I phoned Petros, our friend who runs a pre-school just outside of Diepsloot in a place called Plot 1.

“Hello, Janet!” he greeted me, answering his phone.

“Hello, Petros how are you?”

“I am fine,” he said.  Niceties exchanged; let’s talk.

“Petros, do you have water?” I asked.  This was a measure of how far water interruption stretched.

“Yes, we have,” he answered.  I could hear him smiling.  “People are coming.”  Petros knew that I was going to ask him if people were walking with their buckets to his place to fill up with water.  He preempted my question.

“Which extensions are out?” I asked him, trying to get a feel of which areas of Diepsloot had been affected by water loss.

“Can I bring people to fill their buckets?” I asked boldly.  I knew he was probably already overwhelmed.
“Yes,” he said, gracious as always.  “Please come.”

I drove into Diepsloot through extension 9 where Portia lives, knowing she would be at work but her neighbors would be home.  Right away her close friend saw me driving up and greeted me.

“Portia is not here,” she said, and I tried like crazy to remember her name.  It had flown out of my head.

“No,” she replied.  “Since yesterday it has been off.”

“Can I fill your buckets?” I asked.  Community in Diepsloot means community.  If I filled her buckets then she would share with Portia and the boys and everyone would have water that night.

We loaded three 25 liter tubs and four 5 liter jugs into my car and I told her I’d be back.  From there I drove into extension 1, taking note of the long lines of people at the water tanks, big green things filled once a day by Johannesburg Water during periods of “interruption”.

I called Bessie from the end of her street to tell her that I was there.  She and her neighbor met me, carrying 25 liter jugs and the basket of tablecloths Bessie had washed for the church.  Hmmmm...I guess we’re going to Junction to fill the buckets and return the tablecloths, I thought.

Bessie got in to the car, greeting me with a long sigh.  She asked me to pray for her neighbor, who was already sick and getting sicker because of the lack of water.  Johannesburg Water, Diepsloot’s provider,  usually gives residents a heads-up when there is going to be an interruption unless there is an emergency or a breakage...or they mess something up.

At the church we saw Bright and Tumi, who also said they had no water (extension 4) and Lucky who said he was also out (extension 6).  Keep in mind that Diepsloot’s last census said that there was 150,000 people living in the close spaces that are mostly shacks –factor in that many of the residents are children and elderly.
I was literally making a drop in the bucket for all that were without water.  My friends seemed grateful, but I was ashamed that I could not do more.

After about an hour of filling buckets and containers Bessie and I made the trek back in my overloaded Toyota, whose rear end was nearly touching my tires.  Bessie and I joked that we should lay off of fried foods (we both are slightly doughy).

So we made deliveries- first in extension 6 where Lucky and Charles live.  We saw Charles at his table spaza, selling chips, snacks and airtime.  One of his customers came over and asked if he could have one of the buckets I filled.

“Well, you can go buy another one for fifty rand,” he suggested.  I laughed.

He smiled suspiciously, realizing I wasn't buying it.  “You have a car, I am poor.”

“You’re wearing Nike's,” I laughed.  “Look at my shoes, Pic and Pay specials.”  Charles was laughing, knowing that his customer didn’t realize I was used to Diepsloot and all of its residents asking me for things only because they have been trained to believe that we have everything.

“You are white,” he said, finally.  It was his ace he was waiting to play.

“I am Hispanic,” I said, acting offended. “Do you hear this, Charles?  He’s calling me white!”

Charles and Bessie were laughing, and the man sat down on a stool by Charles’ table.  He asked me for a job, since I wasn't budging about the water I was carrying for friends.

“I honestly know of nothing right now,” I said, switching into a serious tone.  “But if I did, I would most likely give a job to someone who was trying to find one.  Why aren’t you out looking?”  He shook his head and I could tell he was discouraged.  I felt bad for him... but there were so many like him here.  Young, discouraged, a little bit drunk and looking for a hand out.

Further into extension 6 we met Richman, who was also in need of new spectacles, which I actually remembered to bring.  He asked after Mario and we made polite conversation, then he told me something interesting.

“Extension 5 just got water,” he said.

“Earlier today,” Richman answered.  “I think it’s coming down to us.” Richman motioned with his hand, illustrating that the southern extension 5 would trickle forth water once JW opened the main ducts from there.

We said goodbye- back to extension 1.

I decided to back the heavy buckets down Bessie's "street" - a dirt road that is more the size of an alley - and I'm not so good in reverse.  I nearly hit the post of a shack while I was backing in but everyone was forgiving because I was bringing water.

“I’m so sorry,” I said to the owners of the home, who had tapped the back of my car in a warning.  They were laughing and didn’t seem upset.  I asked to take their picture and they posed, graciously.

“Goodbye, my Spiritual sister,” Bessie said, removing the last of the 25 liter buckets.  “Now I am going to bathe.”

She hugged me and we laughed.  Bessie always looked nice; always smelled fresh.  She lived in a place with no running water inside of her home.  Could I do it?

I drove back through Diepsloot, passing line after line of people waiting to fill their buckets by tanks that were either drying up or empty.  I wove my way back to Portia’s and her beautiful friend whose name I could not remember.

“You are back!” she beamed, happily.  “You were not overburdened with the task?”

“Not at all,” I said.  She thought I had only fetched water for her and she could see I only had a small car.
“I will tell Portia you came by,” she said, after I had offloaded the last bucket.  My car’s suspension returned to normal. 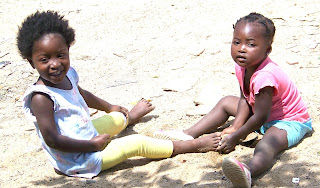 “Tell her to sms me when the water comes on,” I said.

“Thank you,” she waved as I drove off.  As I left to drive back to my house with electricity and running water, I thought of my friends.  We are so alike in so many ways, but so different in others.
Last night, before a meeting, I called Portia.

“So you don’t know if the water is turned on yet?” I asked.  I could hear the din of taxi noise in the background.

“I’ll call you when I get home,” she said.  Later that night she called and we made arrangements for the next day.  Portia and the boys spend the night at least once a month where we catch up and have extended time together, so we made a plan that if the water was not on by the morning I would pick her up for our visit very early so she could do the washing at our house.

When I woke up this morning I poured myself a cup of coffee and did the dishes.  How much I take for granted!  Clean water, delicious and nourishing, is not a right of mine, but a privilege.

I thought of Portia and decided to call her.

Just then I got an sms from her, as if she were reading my mind: “Hi Janet u cn pick us @3 the water is back on & am doing the washing now thanx.” 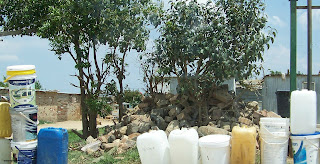 780 million people lack access to clean water - that's more than than 2 1/2 times the population of the United States. For these and other water facts, visit water.org here
Posted by Brazen Princess at 4:23 AM