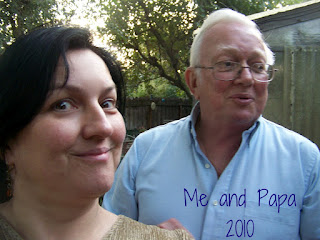 My favorite pictures of my Dad and me are decoupaged to a canoe oar that is in my parent’s entryway.  The pics were chosen by sister, Colleen from the wealth of camping pictures we took every summer on the Ryan family vacations.

It was our time.

One year, we decided to buy and inflatable raft and we had to have an oar, so we bought a wooded one that didn’t even fit through the loops of the raft, purposefully put there by engineers that realized that kids drop the oar while they are rowing – often.  The raft didn’t last, and the oar became a tattered artefact in the storage shed, until my artistic sister decided to make it a memorial of our many camping trips together as a family.  I look at it every time I am there.

My father was born in Boston, an only child, in the first baby boom.  The only child of a mother over forty, he was destined to become the focus of all of her attention.   My grandfather (whom I never met) was a Boston fireman, and died when my father was entering his teen years.  This made his mother even more attached to him.

There are memories of growing up that obstruct a good view of him.  My Nana (his mom) lived with us; he had five children; he was busy with work; he loved sports and watched them often.  My dad wasn’t the active, engaged parent that my mom was.  Mom’s role was all about relationship, connecting and dealing with the day to day nonsense of all of us: five kids seven years apart.

Dad came home from work, every day at 4:45 (he stopped working at 4:30).  He would come in, kiss my mother, greet all of us, turn on his stereo and get a beer and peanuts.  He’d sit for a half an hour and read the paper in the living room and my mother would come in and debrief with him.  If any of us had anything to ask him, this was the time to do it.

We would have dinner at 6, and afterward my dad would maybe watch TV with us for an hour and we would be sent off to bed.  Years of this routine...years.

When I was fifteen, I began a season of rebellion that lasted for about eight years.  Those words, “season of rebellion” are the ones I use to speak about how I systematically broke my parents hearts with one decision after another.  I acted as if I were insulated from all pain, while I shot it out of myself like lightning bolts to lesser beings.   My father’s reaction was to make sure I knew it would not be tolerated, and that lasted for years.

This made me see my father as a regimented, stern fellow (which he probably was, to some extent).  At work, he was a supervisor, in a management position that demanded strength and strong decisions.  At home it was not much different, but he softened a lot around my mother, who became kind of a translator for him.

My Uncle Jim, a larger-than-life mayor of the city was easier for me to relate to.  Even Uncle Jim was a little unnerved that I had a skewed view of my dad.

“He has a bigger heart than I do,” he once said, candidly.

I looked at him and raised my eyebrows (imagine an eighteen-year-old with an attitude).  The everyday routines and disciplinary experiences blocked my vision to see my father  truthfully for who he really was inside.

Who I’ve grown to know him to be.

Thank God, my  father has unfolded into a better picture of himself before me.  There has been a lot of health and forgiveness and genuine desire to understand each other between us.  I have grown to see him as a sacrificial, kind, and genuinely compassionate man who can relate to most people.  Instead of the stern prison warden, he has become an approachable man who has known the pain of loving and releasing those around him, as they are called elsewhere.  Even me.

Yesterday, at the Pick and Pay, I was conversing with my Aunt and Uncle who are here, visiting us.  Hearing us speak, in our heavy American accents, she turned to me and said  “Have you ever watched ‘Extreme Couponing’?”

I laughed, thinking of my father, who cuts coupons and lives (proudly) knowing that he has beaten the stores at their own game.  “Know it?” I said loudly.  “My dad LIVES it!”  My Aunt and Uncle laughed with me.
It reminded me, walking away from her, that today is my father’s birthday, and my heart sank.  I will not be with my dad for his birthday for the sixth year in a row.  I miss him, and wish I could be there to hug him.
I would tell him that, despite my rebellion and my attitude, I have good memories of growing up.  I would tell him that he was a strong example of discipline and self-control.  He provided a safe place to call home, and has made me wish I could have done the same thing.  I would tell him that his influence in Spiritual, musical and intellectual matters have been the greatest influence that any man could have given a daughter.

Even then, it would not be enough to encapsulate the love I feel for him... the deep and profound respect that can only be gained from years of seeing a man of noble character, trying to live as a woman of noble character.  I think God has played a big part of this, and the gift of seeing my father as someone greater than my Dad, and someone as tender as a Daddy  is priceless.

Happy Birthday, Dad.  I love you.

Posted by Brazen Princess at 11:41 PM