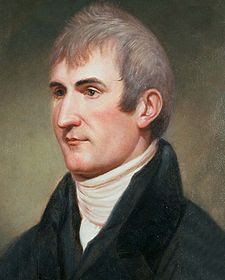 Among the most unlikely heroes of mine is a man named Meriwether Lewis.  The leader of the Lewis and Clark expedition, the Corps of Discovery, he was instrumental in providing the United States with the knowledge of the bulk of the Louisiana purchase.  An educated and well-positioned man, he was a lover of nature and intrigued by the neighboring tribe of Cherokee as he grew up in Virginia.  Because of this, his languages did not only include English, Greek and Latin, but Cherokee - an unusual skill for a man of wealth and culture.

It turned out that his boldness, education, curiosity and sense of adventure suited him perfectly for the US Army, where he met his best friend, William Clark (who he would later choose as his co-captain of the Corps of Discovery) and charged through  service with ambition meant for politics.

The combination of the ambition, adventurousness, knowledge, and fearless curiosity is what made his friend, Thomas Jefferson choose him to look at the largest land purchase anyone in the whole world had ever done.  Jefferson had a theory that there was a river route to the Pacific Ocean and that Lewis would be the one to navigate it.  He could also see who was there first- and how easy it would be to move through their land, or perhaps overtake it.  Jefferson assigned him another equally important task -- to be the equivalent of Google Earth -- making maps along the way.  He also knew that because of Lewis' curiosity he would also take samples of plant and animal life that would rival Linnaeus or Alexander Wilson.

Lewis knew that no matter who he chose as a team he would need a co-captain, and here chose Clark, the level-headed and self-controlled complement that he would need to complete the journey.  If he hadn't have chosen Clark, they most likely would have failed to reach their "Manifest Destiny" that would later become the USA.  Because of William Clark, the two formed a balanced marriage of leadership: fire and ice; introverted and extroverted; cultured and pragmatic; ideas and action.

The most important work over the time of the Voyage of Discovery (the journey from Independence, Missouri to the Pacific Ocean) is Lewis' journals.  Because the Journey was about three years long and not, in fact, navigable by rivers only, the daily record of the amazing move west is the only proof that it was done and who did it.

It also is written by Lewis, whose voice fluctuates between commanding and fearless leader to insecure man trying to figure out what he's doing in this world.  By the evening of August 18, 1805, Lewis had led the corps forward to the Pacific Ocean and was on his way back.  Along the journey they had encountered Native Tribes ready for war and made peace with most;  picked up a translator and his new bride, a young Shoshone girl named Sacagawea; gathered samples of indigenous species of plants; motivated the troops to celebrate or shoulder into hard work and cope during times of near starvation.  On this day, his 31st birthday, Lewis was introspective and wrote:


"This day I completed my thirty first year, and conceived that I had in all human probability now existed about half the period which I am to remain in this Sublunary world. I reflected that I had as yet done but little, very little indeed, to further the hapiness of the human race, or to advance the information of the succeeding generation. I viewed with regret the many hours I have spent in indolence, and now soarly feel the want of that information which those hours would have given me had they been judiciously expended.    but since they are past and cannot be recalled, I dash from me the gloomy thought and resolved in future, to redouble my exertions and at least indeavour to promote those two primary objects of human existence, by giving them the aid of that portion of talents which nature and fortune have bestoed on me; or in future, to live for mankind, as I have heretofore lived for myself.—"

Most people can't understand why the leader of the journey felt so insecure during the greatest time in his life. To see the pattern of Lewis' thinking, you must also see the absence of his entries.  While others journal regularly, Lewis' journals are filled with gaps, sometimes weeks-long.

In truth, Lewis probably had what we call now manic-depression (or bi-polar disorder); possibly clinical depression.  He was able to succeed, to lead and to persevere through what Jefferson called "fits of melancholy".  Even so, when returning to life in the States as a hero and given an appointment of Governor of the Louisiana Territory, Lewis struggled.  At the age of 35 he shot himself and died.

Regardless of his personal hardships and battles within, I love who he was. His personality is still three feet deep to me...and reading his journals I am enthralled how he makes such a journey sound like "just another day"...and it is remarkable, looking back, what needed to be done; and seeing that he and Clark did it.

Now and then I remember Lewis' journals... especially as I blog.  Especially as I have lapses in my blog, or my journal.  I can relate to Lewis, but I feel I have more hope.  Jesus is who defines me, and His name is a strong tower I run into and am saved.  I have greater forgiveness for myself and for others, I think.  I'm married to a man who gets me and supports me, but isn't afraid to correct me or keep me accountable.

Our human heroes are rarely perfect, but it is what they've done that we remember, not how they blew it, right?
Posted by Brazen Princess at 3:09 AM