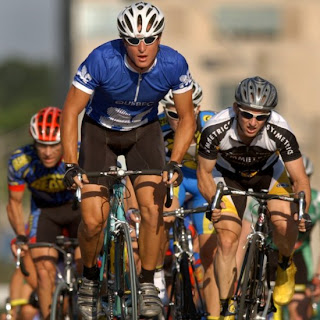 A few months ago I got it into my brain that I would like to do the 94.7 cycling challenge that is hosted in our neck of the woods: North Johannesburg.

The event is a huge party that commandeers the roads in Joburg in the early hours of the event: a  Sunday morning in late November.  It's name derives from its distance: 94.7 kilometers (58.84 miles).

Since I am (relatively) fit, I picked up my training and started cycling classes at the gym.  Different from the normal spin class, these classes are filled with the fittest of fit training after work...and I soon realized I was out of  my comfort zone.

Don't get me wrong, I'm a gym regular, and after three years I can greet most of the staff by name.  I know every machine, all the free weights, my trainer and I have a love-hate relationship...and so on.

There are the superfit there, though, who I have nothing in common with.  The giant body-builders who wear a leather belt and grimace under bars loaded with weight as they squat and press upward; the sinewy distance runners who wear out the indoor track until they are dripping with sweat; and now the cyclists who haunt the corner spin room from 5 to 6:30 in the evening.

I work out in the morning, so until recently, I had never seen them.  They all wear two pair of shoes- one that they walk around in and one they change into once they're there - the kind that snap into the pedals of the bikes.  They're clothed in cycling pants with a padded seat and tight fitting shirts that are usually from one of their many races they've done.

I came to my first class in a tee shirt and normal gym pants.  My shoes are the unpretentious, but durable running shoes I've had for two years.

I am, to use the vernacular, "built for comfort, not for speed" despite my four to five day training week.  My father's heritage (Irish) and my mother's heritage (Mexican) give me the ability to survive and endure... and love to eat carbs.  The normal cyclists that trains competitively will allow only the natural to enter their body.  They also bulk up with protein shakes when they become too thin -- Oh Lord in heaven, smite me with that curse!!!

So, after a few classes my trainer suggested I actually get on a bike and ride.  I borrowed my friend, Terry's mountain bike and and started to ride on the roads around my house.  This is when I discovered two things:  Bikes have gears; and I struggle with balance.

As a young girl, my sister Patty had a bike.  When she would ride it I would watch, waiting for my promised turn.  I got on after she had ridden around and wobbled around our court, finally getting used to it and picking up speed.  Satisfied I could do it, I'd dismount and hand the bike back to my sister, who was usually telling me how uncoordinated I was.  I finally got my own bike and road it around with my friends, who all had ten speeds.  We basically rode recreationally, on flat roads.

At 47, wobbling on a bicycle on sandy hills is another matter.  No matter how hard I've trained, my balance has never really improved.  My cousin, Jody, a professional skater, suggested I practice standing on one foot with my big toe down against the floor and  look straight ahead.  I finally mastered that, but have a problem with a bike under me as I try to pedal and make my bike and body ascend a hill that is littered with pebbles and water troughs cutting through it.

I asked my friend, Colleen (who completed the 94.7 last year) to show me around a place that is designed to be a recreational retreat for area cyclists: Northern Farm.  Meeting me on a Saturday, Colleen showed up in her gear looking every bit the cyclist, and removed her bike from the back of her car, deftly snapping it together.  Mine had been shoved into the back of Mario's pickup.  She strapped on a helmet and asked where mine was.  I didn't have one.

As we rode, she coached me in changing gears (OH!! I see!!) and told me what it was like for her learning how to ride (She's kind of athletic, but normal looking).  She cycled back and forth to University classes in Cape Town, got proficient as an adult and later cycled with friends.  Last year, after being sick for a week before the race, Collen started the 94.7 and finished.  Later, she came to church determined to sit and relax, but the night was a standing and dancing worship session.  Sore and exhausted, Colleen stayed and praised.

Colleen's stories lifted me up.  She had to learn, like me.  She had falling stories, brake stories, trying-to-keep-up-with-friends stories... and she still loved the feel of cycling out in the open like what we were doing, the sun  and a breeze on our faces.  We've since gone out twice more, then I got sick.

I've finally managed (not mastered) to ride around my neighborhood, a rough land with terrible hills and dirt roads that are rarely maintained.  I can do a 3 kilometer loop of hills and stop to rest only once to catch my breath.

My trainer, Natalie, isn't impressed.  "You're going to have to do a lot more if you want to do the race," she says.

I agree, but it is a process.  The whole thing is a process, and a learning process that I've only just started.  It is what life is- a constant challenge.
Posted by Brazen Princess at 1:38 AM