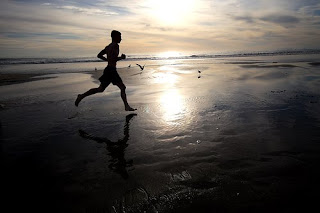 Absquatulate means to flee or abscond.  My spell checker says that this word is not recognized but it is today's dictionary.com's word of the day.

Even though the word sounds like a mixture of circuit exercise for both abdominals and quadriceps, it actually means to run away secretly, like to avoid prosecution or the draft.  People who have absquatulated in the past are Jacob, Moses, Sadaam Hussein, and Osama bin Laden, to name a few.

I love obscure knowledge and delight in learning archaic words.  I also love hidden bits of truth in the language that we have been taught as English.  This particular word, absquatulate, has Latin roots, pieced together, from prefixes and suffixes to create the product desired:  Ab (away from) + squat (a squatting position) + ulate (take).  In other words "taken away from a squatting position".

My grandmother used to have difficulties speaking my native language at times.  She thought that words would deliberately change their colors and shapes, and become difficult on purpose.  Spanish being her first language, she related well to English until it lost its Latin roots.  Words like "bashful" she mispronounced as "vegetable"; and words like "bullion" she would call "boiling".  Not to be overcome by these dastardly words, she wrote them on index cards and placed them on her window sill, practicing them from time to time.

When you don't speak the language a mispronunciation can cause a great stir.  Here in South Africa there are 11 official languages.  I manage to butcher all of them.  Afrikaans, one of the funnest-sounding languages I have ever heard has a lot of cute words, but some I am no longer allowed to say.  Once, when entering a friends' house I asked where her little dog was.  At least that's what I thought I was asking -- because I mispronounced "hondijke", pronounced "oh-nd-kee"  (meaning little dog), it sounded to everyone in the room like their word for a little penis ("winky").  Needless to say, the room was a little nervous, except for Lulu, who guffawed uncontrollably at my bumbling mistake.

In isiZulu, "Unjani?" means "How are you?"  To greet a Zulu person here in their own language is honor to them...unless you mispronounce and then it is funny to them, sending even the most dignified man into giggles.  The first few months here were interesting.

Communicating in any language has its challenges... and in different languages we battle to connect, even though there is no other way except to practice and practice.  When we speak the same language, communication is hard...especially over distances.  Meanings are lost, or hearts are misunderstood.  One poor conversation with strong words can stress an otherwise strong relationship.

So, while I delight in obscure words, my challenge is to master the ones I know in a way that will communicate to the ones I love (or the ones I will speak to overseas) my heart.

Posted by Brazen Princess at 9:11 AM