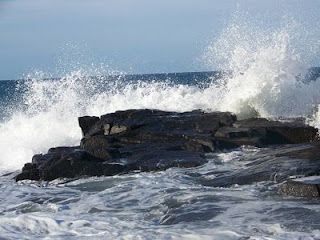 I remember the first days after I knew Jesus was real and personal. He wasn't just a historical figure, but a man who lived and still lives and now knows me personally and loves me, just as I am. I was completely bowled over by the incredible second chance I had in my life. I completely felt free and easy for days. It wasn't until my old self popped up that I started worrying...

Maybe I wasn't doing this right. Maybe the real Janet would eat the "new" Janet and I would once again be a selfish, hell-bent-on-destruction girl who could forget grace and Him, the new, unveiled saviour who died to set me free. I would become as large as the Stay-puft marshmallow man in Ghostbusters and destroy all the work that God was trying to do in me.

That was twenty three years ago. Yesterday.

As I turn over events in my head I can see the old and new vying for control of the Janet the world sees. It makes me sick. Janet should be completely surrendered, and if my own self-bludgeoning won't get me there maybe doing kind acts and worshipping will. I am a walking contradiction in the sight of this world.

But in the sight of my God, I am His. Whether I do bad or good, and whether they all balance eachother out, or one outweighs the other, it really is less important than this: I am His. I am His daughter, the adopted princess who is safe on base with her Father, who rules the World.

Adopted into the people, HIS PEOPLE, that He called His own. He even promised that His people would have a special part of their lineage that He called "The Righteous Branch" - the part of the family tree made perfect by one: JESUS. Because of this branch I am grafted in to God's family. It is my only hope to being called His. His daughter.

In the Bible (Jeremiah 23:6) the righteous branch is given a name: Jehovah Tsidkenu. God, Our Righteousness.

It was later (in 1993) that I got it. I came out of the shower and I was towelling off, thinking of a situation in church. One of the leaders of the Women's group had said something about me to someone else. It wasn't true, and I felt victimized. I told the person I had heard this news from an earful about said women's group leader. Most of it was true, but when it got back to her she called a meeting of all the women to talk about it. I was getting ready to go. I was fearful, knowing I had gossipped about her, but also mad because she had gossipped about me. It was all happening in church!! My goodness, it was really a mess. As I dressed I asked God for help. He spoke to my heart and asked me to ask the woman for forgiveness. It made sense, but I knew it would seem to her as an ommission of guilt... bleeding in front of a shark. He smiled (figuratively) and basically said, "So?" I just realized that I was guilty. I was wrong, but it didn't make God love me less.

I have no other.
Posted by Brazen Princess at 1:16 PM