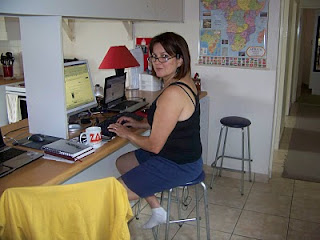 Today truth is not defined in certain terms. It is more of an opinion than a concrete concept. Some things can be true but not truth...as in "The world is round". The truth of the world's shape is that it is globular, and orbiting a larger globe, and rotating on an axis that is tilted.

A flat circle on a paper is round.

Don Quixote says in Man of LaMancha that "Facts are the enemies of truth." Spoken like a man going out of his mind. Truth, and the pursuit of it can drive anyone crazy, unless you know where to look.

Truth is that no one is perfect. Everyone messes up. People are flawed and we all have so many flaws that we can't judge one another without seeing ourselves. Still, if I hear that a friend has hurt another one of my friends I grit my teeth and swear to tell her off. She should be a little more careful, a little more tactful. I can obsess about it for a few days to come, and then when I see her I can scowl and self-righteously condescend her so that if she doesn't see things my way, I still leave feeling superior. Better. More enlightened.

I am a mother to most of my friends, and most of my friends love me enough to love that part of me. But I wonder, as I protect my friends, and silently allow them into the ring of honour that is my friendship, if I am enabling them to gossip or become bitter. Today I became mother-friend-queen high and mighty, advocating for one friend while letting another know how powerful I am...as if I am embracing truth. My own lenses are foggy and blurry with self-righteous reasoning that I usually call discernment. I am as flawed as the one who has hurt my friend. My friend is as flawed as I am...and all of us are piggies in a mud pool. But we all see another one as the dirty one, don't we?

So...I am looking at truth tonight. Truth is not easy. It splits things up into messy fractions and messes up our understanding of the world as we see it.

Then again, why am I saying "we"? Maybe you never struggle with this stuff...

In that case, nevermind.
Posted by Brazen Princess at 1:17 PM