Today my father has another birthday.  Even though he is in his eighties, his health is fairly good, and he enjoys his life.  At this writing he and my Mom are on a mini-vacation, where they are planning on kicking up their heels and eating good food.  Instead of staying home and quietly celebrating his birthday, he’ll be seeking out new adventures with the love of his life.

I love my father.  He’s fun, funny, reads a lot, and listens when you talk to him. He understands the power of a good movie, a good joke, a good friendship, and a good wine.  Many of you know my Dad as Deacon Ryan, an office he held in the Catholic Church for years, until he recently retired.  Yet, after so many years living a public life, I am pretty sure that most people still don’t know all the secret wonderful things that make my Dad special.

I decided to do a mini-trivia game about Dad—even if you don’t know him, see if you can score 100% on this:

1:  Jack’s favorite sport is:
a.  Baseball
b.  Hockey
c.  Basketball
d.  Football (American football)
e.  All of the above, as long as the teams are from Boston.

Answer:  A.  As much as he enjoys all sports, my Dad loves baseball the most—he can remember stats and averages of his favorite players for years on end.  He makes friends with random strangers if they can hold their own talking about baseball.  Some of you fell for “e” because you have seen his devotion to the teams from his home city of Boston—especially his beloved Red Sox.  Growing up in our house, I believed in my heart that sports teams from Boston were “just better” than all the rest, simply because they came from Boston.  I also believed that God hated the New York Yankees – and their owners.

2:  Before he goes to bed each night, he and Jennie have a routine of:
a.   Setting out their clothes that they will wear the next day
b.   Saying vespers (evening prayers and scripture reading)
c.    Watching the Tonight Show
d.    Having a piece of candy and brushing their teeth.

Answer: B.  Not only do my parents have the same routine every night, they invite me to join their prayer time if I am traveling with them.  These prayers are sacred and the routine reminds me that their life has been a series of many purposeful, steady decisions. 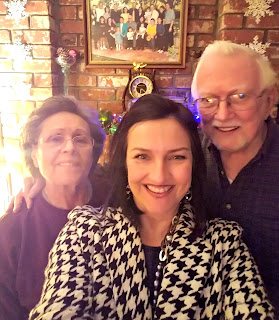 3.    True or false:  My father is known as “Deacon Ryan” to many of his friends, but the title is an honorary one.  He was asked to help St. Bernard’s Catholic Church with their ever-increasing pastoral demands, and since he was going to be a priest before he met my mother, he decided to become a Deacon instead.

Answer: FALSE!  My Dad was ordained as a Catholic Deacon, a permanent minister of the Church, in 1981 after he and my Mom discerned that calling in his life. It involved schooling at the level of a graduate program, and a commitment that involved the input of his wife, family, program directors, and especially the leaders of our home church, St. Bernard’s.  He met many inspiring friends, teachers and mentors along the way and served the church community tirelessly. After years of participating in this vocation, he retired after 35 years.  He still visits the sick and ministers where he is needed.  The calling is still in his heart.

4.   There is always room in my father’s schedule for:
a.    Organizing newspaper clippings
b.    walking his dog
c.    shopping for bargains
d.    cleaning his glasses with q-tips

Answer:  C.  The joy of finding a good deal, of not paying full price for something that he needs, is nearly immeasurable for my Dad.  I have seen him take great delight in cutting out coupons or watching the sale ads, lighting up like Moses when he finds my Mom’s favorite cereal or a good frozen pizza on sale.   Scoring a bargain, especially when someone near him has paid twice as much for the same thing, proves that my Dad is still the bargain hunter he always has been! 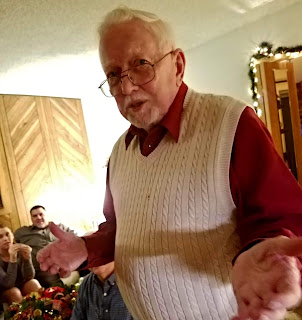 Answer: D.  Since hardcover books line the walls of the Ryan house, I was surprised that my father found a new slice of tech-heaven in an e-reader, something I never thought he'd embrace.  Although I love my kindle, especially during travel, my Dad surpasses my kindle yearly activity in a month!  He reads primarily on a screen, rather than on the page, like I do.  Dad has learned to love the convenience--and bargains--that are found with his e-reader.

And so, that's just a sampling of the trivial things people never think to ask. How did you do?  Post your results here! I hope you learned a little bit about my Dad, who is still surprising—even at 84!

Happy Birthday, Dad!!  I love you!

Posted by Brazen Princess at 3:49 AM