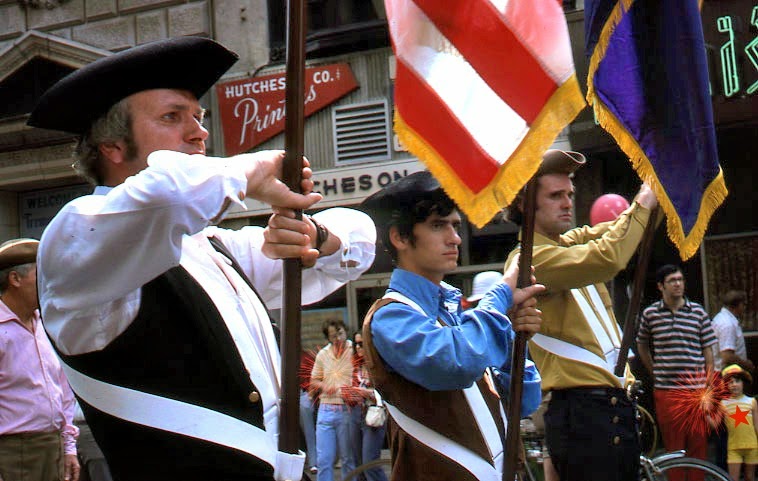 I was thirteen years old on July 4, 1976.  We were in the middle of a family vacation, my parents and four siblings, travelling across the United States in a Station wagon, pulling a pop-up camper.  In retrospect, I think my parents had to be either nuts or unusually optimistic – we lived in California and we were bound for Cape Cod, Massachusetts.

We traveled one or two major states a day in the car, stopping at National parks along the way at about 4:30 or 5 in the afternoon.  There we would set up the camper, explore, swim or “hang out” by the campfire.

By the 3rd of July we were in Washington D.C. (I think it finally dawned on me that my father had planned it that way.)  There was a major parade in the city (to be televised the following day) and we watched it with hoards of people wearing visors and waving small flags. I don’t remember much about the floats or the bands or the actual parade; what I remember is that my Dad actually let me stand on a wall the whole time and I felt free and easy, like a hippie.

Looking back , it was amazing.  I was part of history.

It was the nation’s Bicentennial celebration, celebrating 200 years free of Tory rule – free and standing tall.  It meant a lot to us as a nation to celebrate this way.  We were all recovering from Watergate and the Viet Nam war – people felt betrayed by their government.  My father and mother were dyed in the wool Democrats and they were ready for some healing... they charged head-first into it.  They were as patriotic about the country's healing as they were about its roots.

That day standing on the wall, watching the parade, I felt truly American.

I also remember one other thing about that day; boys.  There were so many boys in Washington D.C. and they all looked at me like I was actually cute.  It was the first time I realized I was pretty – for a thirteen year-old girl.

This is probably my favorite memory of Fourth of July – and I have a lot.  It’s always been a great holiday for me.  I hope it has been for you.

Happy Fourth; God bless us, everyone.
Posted by Brazen Princess at 12:36 PM