Please indulge me as I leave my adopted homeland. I'm writing a series called
"Top Ten Things I Would Have Never Said in America" 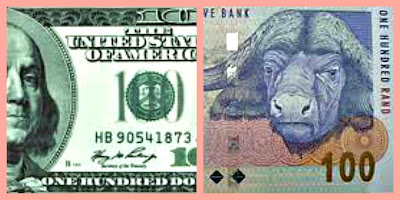 A dollar is a dollar and cents are cents and everything gets more expensive as the years go by in America.

We don't have oodles of money and we have never been investors, except with our hearts.  We knew only of the dollar before moving here - it's value seemed the same to us, every day.

In South Africa, like many emerging nations, the currency’s strength is measured against the dollar and pound.  Every day the value of the rand, our currency, changes.  My radio station gives the exchange rate each day with the weather.

“The rand strengthened today against the dollar, now exchanging at 8.5 to 1.  The local temperature is 25 degrees Celsius.”

The rand changes like the weather here; its value on the world market, like any other currency, depends on the interior strength of the country.  After three credit rating downgrades since October, and as labor disputes shut gold and platinum mines, South Africa’s economy had suffered.  This is one of the key reasons that the rand has devalued – and a weak rand is bad for the people.

It is seen in the price of our food and it makes us pray for the country.

Those pennies add up – especially to the shop owner.

To have unstable currency when you are very poor (80% of South Africa lives well below the American poverty line) the fluctuation affects your transport costs, your grocery bill and your bus ticket home during the holidays.  They work for a set wage – as most South Africans do.

If you are wealthy in South Africa you can gain or lose millions of rand a day in one exchange.  That’s why the shrewd business people of South Africa are the ultimate speculators.  Their investment in their country is deep from the heart and their pockets.  They have invested to win.

For us, the exchange rate mainly determines whether we use cash or a credit card on high or low days.  Since we pay off our card in dollars, some days (when the rand is exchanging at ten-to-one, say) we will opt for the credit card.  This causes us to spend fewer dollars than we would if we used our rand.  Especially if we bought those rand-notes at eight-to one.

I now am moved with compassion for people who live in who live with the fluctuating value of their currency.  They work and then stretch their money as far as they can – going without luxury items many times.   They are my heroes.

God Bless us, everyone.

Posted by Brazen Princess at 7:55 AM