Please indulge me as I leave my adopted homeland. I'm writing a series called
"Top Ten Things I Would Have Never Said in America"

7.  I bashed the hooter at the robot.

In words we communicate our hearts.  We make ourselves known.  We can master the art of story-telling so perfectly that people can rest and escape at the same time.  In school I loved etymology, the study of words and how we (as English-speaking) piece together our language from several “mother tongues”.

When I became a Christian I held fast to the Bible, the Word of God.  Jesus is even called “the living Word” – a name not carelessly given.  He translates God’s heart for the nations.

With all of this love of words, I cannot believe how clueless I am about words here in South Africa.  I should clarify this: I am challenged by the vocabulary and the use of English idioms here.

Being in South Africa I have had to learn a new host of idioms (proverbial sayings) and new words. I was astonished at how much I didn’t know of real English vocabulary.

I grew up speaking American.

When I first visited this country I was attending a rather large conference.  Like all conferences, there were a few public bathrooms and a few scheduled breaks.  The line for the bathroom wrapped around the corner and I took my place at the end of it.

A woman came up behind me and said, “Hello, is the queue to the loo?”

I looked at her blankly, then panicked, realizing she was asking me a question in another language.  I couldn’t very well say “Sorry, but I don’t speak proper English.”

The woman in front of me smiled and answered her, “Yes, I’m afraid it is.”

We were also invited to a “lekker braai” (a killer BBQ) while we were there by some friends who really knew what they were doing – Afrikaaners.  I knew then that I would have to learn a host of Afrikaans vocabulary as well!

Then, came my Zulu friends.  My Shona friends; Xhosa, Venda and Sotho friends.  All with their vocabulary.

I started memorizing the vocab as soon as I could. Some things were necessary: the traffic lights were called “robots” here.  When someone wanted you to honk (or not honk) your horn, they asked you to “bash the hooter” – or advised, “Don’t hoot.”

Being the student that I am, I started keeping a journal of new vocabulary.  It looked something like this: 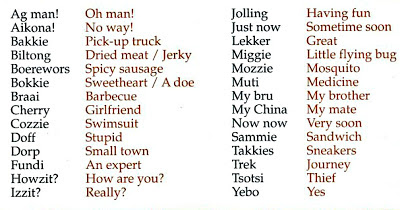 If I memorized it all, I could even say it, right?

Sometimes we were just pronunciation-challenged.

“Excuse me, but can we have some water?” Mario asked a waiter at a local restaurant.

“Some what?” the confused waiter asked us, making a face.

“Water,” I repeated (my American accent is “less thick” than Mario’s).

The waiter disappeared and came back with his manager, also a black man who bent over our table and listed carefully as we asked again.

It just occurred to me that I was asking for “water” – instead of “Whoo’ – tər”.

When I asked using my best English accent, he stood up and smiled brightly.  “OH, yes, of course!”

Back in America my English pronunciation stuck and my family accused me of developing a South African accent.  Ha! If only my Joburg friends could hear that!

Idioms were worse.  I was accused of “picking up stompies” when I overheard only part of what someone was saying;  asked to “give it a bash” when I should just jump in and try something; and learned to say “Shame!” when something had not gone so well.

All of this I take back with me.

My brain can't keep up as fast as it should be able to.  I've said things here that have caused a roomful of people to burst out laughing.  I try to speak South African to make it easier on everyone else, and I never ever dreamed my words would cause confusion.

In my conversation, I have to remember where I am and draw from a wealth of words to communicate properly. 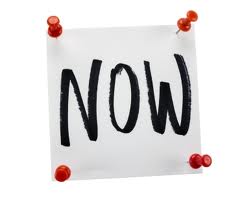 To the rest of the English speaking world,  now means “this minute”  or “at this time”.  South Africans, listen up!  Listen to the clueless American here. I’m right about this one.

Posted by Brazen Princess at 6:01 AM