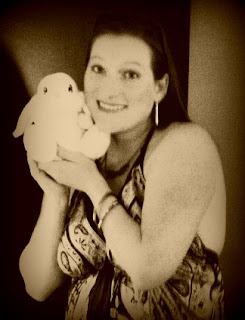 I still remember the day that David, our oldest son, met his wife-to-be.  I was upstairs on the phone and Mario was downstairs, and we were listening as he was telling us about a date he had with a pretty young lady named Lennae.

I was standing up, making the bed and I rolled my eyes.  David, an astrophysicist computer geek, had the brains of a genius, and the worst luck with women.  His last two girlfriends had drug him to hell and back and I was not expecting him to date again until he had recovered.  His story, made me stand straight up and listen.

“We got into the car and I had Blue Oyster Cult, ‘Don’t Fear the Reaper’ on, and she said ‘I don’t know about you, but I could use more cowbell.’”

I held the phone in my numb hand and imagined a movie camera zooming in on my face.  I thought, “Oh, no...he’s going to marry this girl.”

For those of you that don’t follow Saturday Night live religiously (like the Rodriguez family), Lennae was referring to a “Behind the Music” sketch, where the male cast re-enact the infamous taping of the rock classic, directed by a superstar producer, played by Christopher Walken.   Will Farrell imitates a 70’s stereotype rocker, playing a cowbell through the song, and messing up the taping.  The spoof had Mario and I in stitches.  Later, when we talked about it with the kids, it brought comic relief to tense times.

Lennae knowing the sketch was one thing, but she said a line that we used to say to each other as a private Rodriguez joke – when something was ridiculous or stupid.  If a cheerleading squad did a “cheer dance with spirit fingers at the end”.  Yeah, that was good, but I could have used a little more cowbell....

Mario went before me to meet her (David and Lennae lived in the Kansas City area) and came home with pages of notes about the visit.  Mario loves taking notes about things.

“She’s been through a lot,” he said.  “Her parents are divorced and she seems like she became an adult very quickly.  She used to dance – swing dance.  But since David doesn’t dance she doesn’t dance anymore.  She loves animals and rescued two that are with them now.”  Here he looked up and smiled.  “You have to hear this story...”

He told me the story that melted my heart for her: Lennae used to live in an apartment building that was pretty small; a downstairs unit that had a door facing another tenant.  The other tenant was a dodgy individual and kept a dog chained up by the front door.  The chain was long enough to reach his food bowl and let him poop in the bushes, but short enough for the dog to have no room at all to live freely.  He was put there, mainly to guard the entrance and was pretty mean and ferocious.  At first Lennae was scared of him, since she had to pass there just to get to her door, but she soon realized that this dog had no play, no company and no love.  She began to give him attention, and when she came home, he would shake with joy in seeing her.  She once asked the owner if she could take him for a walk or play with him, but he denied her, saying the dog didn’t need anything like that.  On the day she moved out of the apartment, Lennae turned in her keys to the manager, unhooked the dog, and took him to her new home.  He was one of the most loved animals in the world there.

“So,” I said, trying to get a picture of her.  “Is she a Cathy or is she a Janet?”  This question, for Mario was a no-win.  Cathy is Mario’s ex-wife, the mother of David and Joe.  She is a blonde, blue-eyed “girl-next-door” type that is peaceful and loving and soft.  Janet (me) is a raven-haired opinionated, passionate woman filled with fire...and repentance when I have to remove my rather large foot from my even larger mouth.  Which was Lennae?

Crap.  Now I had no idea what to expect.

I met her two days before the wedding, where I introduced myself and went into my nervous story-telling thing that I do in order to explain myself.  She had the greenest eyes, like our son, Vince.  It was hard not to be mesmerized by them.  Her skin was a perfect peaches and cream and she was statuesque and lovely.  She also was very affectionate with David, and he with her.  I was a little uncomfortable around the two of them, but smiled at Vince and Alicia about the whole thing. (Another Rodriguez joke? Smiling and plugging your nose around open displays of affection...)

When you are a “step-mother” at a wedding, things don’t work out as smoothly as you would think they do.  I prepared myself for the awkwardness, but was very honored that David and Lennae asked me to be part of the first row, with Mario and Cathy by my side.  The wedding was gorgeous, and Lennae was dressed in a silk, strapless gown that showed off the loveliest shoulders since Princess Di...and her tattoo on her back.
The reception was in a stunning Victorian house, and we gave David and Lennae a copper cowbell that was engraved “I got a fever! And the only prescription is more cowbell!”  It was their favorite gift.

It turns out Lennae was nervous about the day because she loved each and every member of her family, but they did not like each other and had a very hard time being in the same room with one another.  She had just lost her beloved grandmother, a peacemaker and a joy to her heart.  Looking back, I think Lennae was surprised that Cathy and I loved each other the way we did.  It was easy to – Cathy is a Cathy.

They honeymooned in the wine country of California, where they graciously added us to their stay for two days.  I played a video of David and Joe singing “Kiss the Girl” to the Little Mermaid – as I promised him I would when he was ten years old and woke the whole house up with a slumber party.  Our cool, controlled computer genius hid red-faced, under the kitchen table, humiliated beyond belief as Lennae laughed her head off and held her arms open to him.  The memory is unforgettable.

We vacationed in Kansas City with them as a family, where all of our techno-savvy kids played x-box together (we didn’t ever allow it in our house, and all of our kids had become pros).  Lennae was pregnant and unable to keep food down, sometimes even water, and I worried about her.  Even though she was in her last trimester, she never had the “morning sickness” pass, and the sickness lasted all day.  I was very worried about her and said so as we left.

“Don’t worry,” she said.  “David takes good care of me.”  He did.  It was nice to see the marriage working so well, although they said they never fought.  I saw this as a danger sign.  I didn’t know that the word “fight” had the worst connotations for both of them.

Laila came one day and changed our lives for good.  We were now grandparents.  The pictures that they sent us were of the birthing tub, a method of drug-free birthing that Lennae had chosen to do.  After looking at them, I felt the same awkwardness that I had felt seeing the open displays of affection that David and Lennae had with each other.  She and David were beautiful, almost sensual in the tub as Lennae gave birth to her first child.  Her face was that of a Raphael painting, not the contorted red devil face one usually associates with childbirth.

Laila Willow was perfect, with the same green eyes as her mother.  The first time she called me “Abuela” I thought I would die for joy.  It was like being fourteen and the popular cute boy says “hi” to you and says your name...but better.

Soon after Laila came Lilliana Grace, then Lauren Caroline.  All with the tub, all without pain meds.  I secretly called Lennae “Mother Earth”, mainly because of the way she championed the birthing process and breast feeding.

Last Christmas she hosted all of us (except Vince, who couldn’t make it) and we all played Quelf and wii and drank Irish car bombs...and laughed our heads off.  We had tender, gorgeous heart-to-hearts and she showed me her pictures of each birth.  And when I got on the plane I cried....

In my mind’s eye, she is surrounded by confetti and children.  I think she is literally one of the most agreeable people I have ever met, and in a strange way, she has taught me to accept people in my life regardless of their beliefs or convictions.  She is, without a doubt, the best person in the world for my step-son – our son- David...and I would have never ever chosen her if it were up to me.

For that reason, she is a gift and a blessing to me and to us.  Today is her birthday.  Happy Birthday, honey.   You are a delight and joy and everyone’s daughter-in-law should be like you. 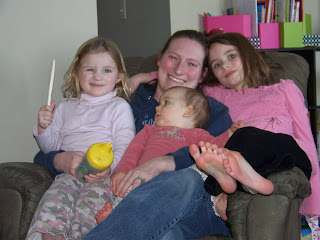 Because of copyright, it is very hard to find a good copy of the video of the comedy sketch we are talking about in this post. This a crude one from youtbe. Click here to see it.
Posted by Brazen Princess at 1:39 AM