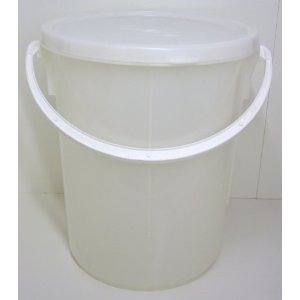 A twenty-five liter bucket is the main unit that people use to store water in their homes in the township of Diepsloot.  Since most areas have only community water that residents share, most water comes from a spigot outside that provides water for bathing, washing and drinking.  Residents will fill a 25l bucket outside and take it in to cook dinner, wash the dishes, heat for bathing and brushing teeth later.
Today, Diepsloot looked like a third-world country, with women carrying these buckets on their heads from great distances outside of the township for one reason: their tap water had been contaminated.
Greater parts of Diepsloot, the township in Northern Johannesburg,  have had no running water since Thursday.  Several “news”papers here in Johannesburg (more editorials that facts) have reported on the situation, citing bits and pieces of reports given to them about how the problem came about.  While Johannesburg Water had made no formal statement until yesterday about what went wrong, it didn’t matter: the damage had already been done.
Speaking with Johannesburg Water spokesperson, Milicent Kabwa this morning, and then later this afternoon, she said, stoically that the department is set upon “Rectifying the problem” but gave no answer to how long the process would take. She advised me that water trucks had been journeying in and out of Diepsloot in order to fill the community tanks, placed strategically all over the township.
Kabwa cited that the problem began when “one  contractor working in water, crossed drinking water  lines with sewage lines” accidentally.  The cross resulted in the mass contamination of the townships drinking water.
Supplying water to the over 190,000 residents (who formally answered latest census) in Diepsloot, Johannesburg Water has had more failure than it has had success in providing dependable drinking water to the township.
Last year, water outages were a common occurance, something the African National Congress promised to rectify if they were elected to take office.  Residents are still waiting for the ANC to keep this and many other promises.  Diepsloot had more disruption in water service than any other formal community in JNW’s district .
E. coli and related bacteria can quickly enter a community, with  fecal-oral transmission (sewage water mixed with drinking water) listed by the Center for Disease Control as the major route through which pathogenic strains of the bacterium cause disease. Cells of active E. Coli are able to survive outside the body , which makes them ideal indicator organisms to test environmental samples for fecal contamination.
When asked whether the guilty contractor that crossed drinking with sewage lines would be hired to work for Johannesburg Water again, Kabwa was unable to say, but told me that the department was “investigating internally”.
Today Extension 2 was declared  safe and residents in the area were told that they could drink their tap water.  As for extensions one and 3-13... Police cars patrolled the area today, making public announcements on a loudspeaker warning residents to not drink their water.
I asked Ms. Kabwa, in the most polite way I knew how, if this would ever happen in an area that was more developed and perhaps valued than Diepsloot.  She quickly dismissed my question as nonsense.
“Obviously, this was a human error, and human errors can happen anywhere.”  She then assured me that Dainfern and Sadslebrook, two of the wealthiest areas that neighbor Diepsloot, have had no interruption in water service, and are operating as normal.
Police will continue to alert citizens until Johannesburg Water can determine by its daily testing if Diepsloot’s drinking water quality is alright.
Today in Diepsloot, tanks that Johannesburg Water said would contain drinking water for the people stood empty at extensions 1,6,7,10,11 and 13.  I did not see one water truck come into Diepsloot while I was there (all day), but did see a paraffin truck come in.  I started to cheer, but realized the tank had a flammable sign on it.  One of the women at the water filling station who had been waiting in the sun for the water tanker to fill it, began to laugh at me.
“We can recongize the difference now from far away,” she said.
I smiled.
At least I made her laugh.
Posted by Brazen Princess at 8:16 AM