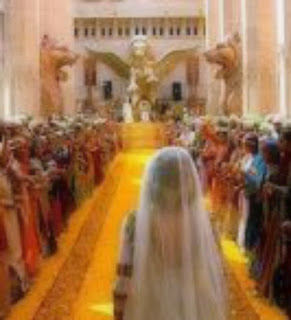 The story of the Jewish Holiday of Purim is the story of Esther.  It is better than any mini-series that has ever aired on television, but it reads like one:  full of power, deceit, love, secrets and betrayal.
At the conclusion of the story lies victory-  of the Jews surviving in Ancient Persia (Modern Day Middle East), and celebration with a queen that was Jewish, just like them.


The celebration has endured and is now called Purim.  It  takes place on the Jewish calendar this time of year. It is festive, colorful and filled with family.
The Book of Esther is in the Old Testament, nestled in between the Books of Nehemiah and Job.  The story is one of a girl who was brought into a land to be chosen as a new queen for the most powerful king of his day, Ahasuerus (Xerxes).


The story begins with Ahasuerus, after getting word of the fruitfulness of all he owned,  deciding to throw a party that would last 180 days.  The drinking feast given by the King, for the army of Persia and Media and for all his servants and people, was supposed to conclude with a 7 day drinking feast for the women organised by the Queen Vashti (Ahasuerus’ wife)  in the pavilion of the Royal courtyard.  Since they had thrown the six month party, the King thought it only fair to reward the ordinary people with a week’s celebration.
At this feast Ahasuerus supposedly got pretty drunk and ordered his wife Vashti to display her beauty before the people and nobles wearing her royal crown. When she refused,  Ahasuerus was furious...and embarressed in front of all of his guests.  He quickly decided  to “remove her from her post”, and was supported by the royal advisors.  After all, they said,  if the King’s wife will not obey, what example is she setting for all of the other wives of the kingdom?
After he removed her (banned her from his presence), he sulked and stewed...and eventually cooled off.  In his cooled-off state, the King remembered that being married was pretty cool... and with the right woman it might be a good thing, right??
So King Ahasuerus called for all of the young women in his kingdom to be presented to him, so that he could choose a replacement.  There was no interview, it was just a babe-walk.
One of the young virgins was Esther, an orphaned girl who had been fostered by her cousin Mordecai.  Esther, just as she was, won the admiration of everyone who saw her. She “found favor” in the king's eyes, and was made his new wife.
Esther, upon Mordecai’s advice, did not reveal to anyone that she is Jewish. Esther, obedient and loyal to the man she trusted as her father, made sure she did everything Mordecai said. This evidence of a humble and grateful disposition was seen as a special grace that charecterizes Esther throughout the story.
As Esther lives in the palace, her foster-father, Mordecai, was part of guarding in the king's gate; which afforded him the opportunity to keep watch over Esther all of the time.  Shortly after she was chosen as wife #2 for Ahasuerus, Mordecai discovered a plot by the King's own servants, Bigthan and Teresh to kill the king.  Mordecai informed the royal guard, who apprehended and hung the men summarily, and Mordecai's service to the king is recorded – written in a book that is for the king’s histories.
It is here, in the story, where we meet the King’s power-hungry prime minister, Haman, who (by the way) seeks to be worshipped.  Mordecai, who sat at the palace gates, refused to bow down to him, and angered Haman greatly.   Having found out that Mordecai is Jewish, Haman planned to kill not just Mordecai but the entire Jewish minority in the empire.
Like most politicians, Haman tarted up this plan and presented it to a clueless Ahasuerus, who gave him permission to execute this plan.   When Mordecai found out about the slaughter-plan, he ordered widespread penitence and fasting. Esther discovered quickly what had happened, but wanting to remain a-political, sent message to Mordecai that she had no intention of approaching the king about it...after all, just look what he did to his first wife! 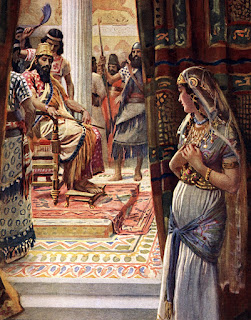 Mordecai sent her this message: "Don't think that just because you live in the king's house you're the one Jew who will get out of this alive.”  His warning came with a reminder- "You could have been spared for such a time as this."


Esther quickly realized truth, and requested that all Jews in the area fast and pray for three days together with her.  On the third day she would ask to “have an audience” with Ahasuerus.
Before meeting with the king, Esther cooked up a huge feast, and got on her best clothes.  The food was so great that the King promised to do ANYTHING she asked of him.  Esther chose to invite him to another feast, the very next day - in the company of Haman.
Haman, full of himself and confident that he is loved by not only the king, but his wife, had a special  gallows built for Mordecai, with the intention to hang him there the very next day.
That night, Ahasuerus suffered from insomnia, and asked that the the book of histories be read to him to help him sleep.  As it was being read, the King remembered the services rendered by Mordecai in the previous plot against his life. As he thought to himself  he would not be here without this man, he also realized that Mordecai, had yet to be rewarded. 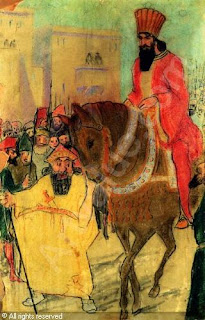 During the thought process, Haman came in.  King Ahasuerus asked him “What should be done for the man that the King wishes to honor?”   Thinking that the King was referring to himself, Haman declared quickly the best thing he could think of: the honouree should be dressed in the king's royal robes and led around on the king's royal horse. To Haman's horror, the king instructs Haman to do so to Mordecai.
The Bible has a way of letting us feel the twist of the knife in Haman’s back.  It is priceless.
After Mordecai’s  parade,  Ahasuerus and Haman attended Esther's second banquet.  It is here that she spoke: revealing that she was of Jewish descent and that  Haman had been planning to exterminate her people.


The king’s famous temper flared up again, and he left the room.  Taking advantage of his audience with the queen,  Haman fell at Esther’s feet and begged her to ask the King to be merciful on him.


As the king came back from the palace garden into the banquet hall, Haman was groveling at the couch on which Esther reclined. The king roared out, "Will he even molest the queen while I'm just around the corner?" When that word left the king's mouth, all the blood drained from Haman's face.
As the King said this, one of his servant said: “Hey! Look at that!! Just outside is the gallows that Haman had prepared for Mordecai!  Why don’t you hang Haman there right now?”  The execution was quick, and the King’s anger was appeased.
The Jewish people survived the plan of annihilation.  Haman was killed and Mordecai was rewarded.  Esther became a valued voice to the King and a hero of her people.  How cool is that?  I have learned so much from the book of Esther.  For instance:
·          beauty helps a lot getting a visit to the King, but you need your brains once you’re in there;
·          It is always good to have trusted advisors;
·         honor your family, who loves you and needs you;
·         You should pray when there is pressure, rather than panic;
·         The best way to get anything you want from your husband is to cook him his favorite foods and then look really hot when you serve them to him....
What?  Those are valuable lessons!   I also notice that Esther was given her role as a queen and never abused it.  She was gentle and smart, and didn’t out her enemies until it was the right time.  She trusted God, even when He seemed absent.  She was known for being noble, bright, trusting and secure...and a stone fox.
Sigh.  I hope one day people will remember me that way.
Purim is a time to bake in the Northern Hemisphere because it’s cold.  Here’s a popular recipe from a girl called Tori, who calls herself “Shiksa (non-Jewish lady) in the Kitchen” 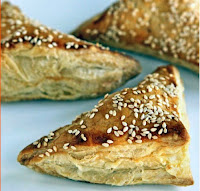 Cheese Bourekas
These Cheese Bourekas are also a fun recipe option for the upcoming Jewish holiday of Purim.
Purim is often celebrated with a meatless menu in honor of Queen Esther, who became a vegetarian to keep kosher in the palace of her non-Jewish husband King Ahasuerus. Stuffed foods are traditional for Purim, as are triangle-shaped foods. These Cheese Bourekas are both triangular and meatless, making them a great choice for a Purim menu!
By Tori Avey, The Shiksa in the Kitchen
Ingredients:
·         2 sheets puff pastry
·         ½ cup crumbled feta cheese
·         ¼ cup grated kashkaval cheese (or substitute another ¼ cup feta)
·         ¼ cup ricotta cheese
·         1 egg
·         Salt and pepper
·         1 egg yolk
·         1 tbsp sesame seeds or poppy seeds for topping (optional)
·         Nonstick cooking oil spray
You will also need: large baking sheet, rolling pin, 2 small mixing bowls, pastry brush
Total Time: 45 minutes
Serves: 18
1.       Preheat oven to 350 degrees F. In a mixing bowl, combine feta, kashkaval, ricotta, egg, a pinch of salt and a pinch of black pepper (if using all feta cheese, no need to add any salt). Use a fork to mix ingredients together till well blended. Make sure to break up any large crumbles of feta with the fork. Reserve mixture.
2.       On a smooth, clean, lightly floured surface, unfold one of your puff pastry sheets. Use a rolling pin to roll out the sheet to a 12x12 inch square. If using homemade puff pastry, roll your dough out to a 12”x12” square. Cut the sheet of puff pastry dough into 9 equal-sized squares, each about 4”x4” large.
3.       Place 1 tablespoon of the cheese filling in the center of each dough square. Fold the dough squares by grasping one corner and folding it over to the opposite corner to make triangles. Pinch firmly along the outer open edge of the triangles to seal. You can also crimp the edges with the tines of a fork, if you wish.
4.       Repeat this process for the second sheet of puff pastry—roll out the pastry, cut into squares, add filling, and seal the triangles.
5.       Spray your baking sheets with nonstick cooking spray or line with parchment paper. Place 9 bourekas on each sheet, evenly spaced, giving them some room to expand during baking.
6.       In a small bowl, whisk together the egg yolk and 2 tsp of cool water. Use a pastry brush to brush a light layer of the egg wash onto the surface of each boureka. Sprinkle the bourekas with sesame or poppy seeds, if desired.
7.       Bake the bourekas for about 30 minutes, switching the baking sheets between the upper and lower racks halfway through cooking. Bake till golden brown and cooked through. Serve warm.
RECIPE © 2012 The Shiksa in the Kitchen. All Rights Reserved
Posted by Brazen Princess at 3:34 PM