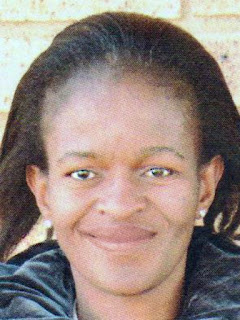 Yesterday I attended a memorial service in Diepsloot for Ntswaki Mabel Dhathu, a high school teacher and colleague of a friend of mine.  She was a young woman who barely looked old enough to finish her teaching degree  but served as an example of love and warmth...and was the light of her school.
Such deaths are common, but one as tragic as the other.  I was especially moved by the life of this woman, since she shared with me a passion to teach, and I saw in her the promise of changing this world, one life at a time.
Bessie, my friend is a school governing board member at Diepsloot Combined, a high school situated inside of the township of Diepsloot.  She told me that she would have to cancel a lunch date we had set up for Thursday, in order to attend a colleague’s memorial service.
“Bessie, why don’t we go out to breakfast instead,” I offered.  “Then I’ll go with you for this lady’s funeral.”
“Oh, would you?” she seemed so pleased.  “I would be very much impressed.”
Over breakfast Bessie and I caught up with each other’s lives and the Christmas holidays.  We chatted, like all friends, over a myriad of subjects.  When it was time to go we passed a florist.
“Why don’t we get something nice for the family?” I asked.
“Oh, yes,” Bessie agreed, eyeing a bunch of white roses in a willow basket.  We took them, although very simple, as a token of esteem and sympathy.
At the service, the hall quickly filled with high school students, looking well groomed and gorgeous in their school uniforms.  Their eyes were bright with promise, and they spoke in hushed tones in respect for the event.
Upon seeing the picture of her friend hanging near the podium, Bessie began to weep, shielding her eyes from me.  Her tears were so tender and so sad that I put my arm around her and led her to a chair in the third row.
I was quickly corrected by the woman coordinating the seating.  “My darling,” she said, lifting me to my feet, “your seats are here.”  She led us to a table in the front, where a white cloth had been draped and had a water pitcher and glasses.  It was a table reserved for speakers, so  I  quickly realized that Bessie would be eulogizing her friend, and maybe I would say something as well.
Soon the hall was full, and the buzz was amazing.  People from far had travelled, and I learned that Ntsawki was from Soweto, in the South-West of Johannesburg (Soweto literally stands for SOuth WEst TOwnship).  Diepsloot is in the newest township in Johannesburg, at the very northern tip of the city.  The commute for this beloved teacher must have been at least an hour away.
The service began with a prayer (yes, there’s still prayer in schools here) and a welcome to all of the family, friends and colleagues of Ntswaki’s. The principal began with the story of how she came to teach in Diepsloot, so far north of her home. 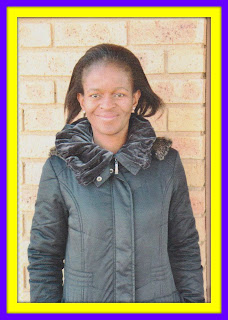 “She wanted to make a difference in the lives of the learners,” he said.  “This meant that she wanted to go where the teacher’s shortage is.”  Diepsloot, the poorest township in Jozi, is constantly trying to fill teaching positions.  Since it is necessary for a teacher to hold a degree and a full credential, the teachers who chose to teach in Diepsloot would be paid very little for a lot of education.
“I remember telling her that Soweto is very far away, and that she should spend less time tutoring children after school,” he continued.  “She used to tell me, ‘If I go back later, there is less traffic.’”
Speaker after speaker told similar stories, and before my eyes, a woman I never met came to life.  She was sick (most likely with the deadly virus), and despite her diagnosis, kept as healthy as she could.  She worked cheerfully and steadily, helping her classroom understand the importance of the education she brought to them, and administrated for them.  She spent countless hours encouraging students and teachers, always uplifting them with her words.
“She was the light for us,” one of her students said, tearfully.  While the four top students in the class gave a hand-made card to the family and bowed respectfully, tears welled in my eyes.
My friend, Bessie, told a story about her name.  “Ntswaki means ‘Finally, a girl!’” she said, through tears.  “I can see that the family was happy when she was born, and they took great care to educate her so that she could educate others.  I remember her working long after the school was over, and I would say, ‘Hurry home, Ntswaki, your family will say “Finally, our girl is home”’ and she would laugh.”  Bessie paused.  There was dead silence.  “I see that she has gone home to heaven, and although we will miss her she won’t be sick there.”
Weeping and sobbing could be heard in the crowd.  There were hymns sung in perfect harmony, remembering the teacher by singing her favorite songs.  There were speeches given by the Teacher’s Union, which sounded alittle political for a memorial service, but a union worker never misses an opportunity to address the masses....  There were tears and laughter and lots and lots of singing.
I think of her tonight, as I type this.  She was a woman with a dream to teach and to make a difference.  Her offering is one that is made by thousands of teachers world-wide every day.  Here, Ntswaki was a hero, not only for her actions but for her example to these students, these learners.
Everyday a teacher leads people to wisdom, shares their love of learning and becomes a friend and a trusted ally to vulnerable children and teens.   This is highly magnified here in South Africa, and especially in the townships.   Many times, the only person encouraging education in a township child’s life is found at school.
While Ntswaki was a stranger to me yesterday, she haunts me today.
She is among a rising number of young women in South Africa that will die from the deadly virus.  The number of AIDS related deaths in South Africa has risen 93% since 1997. Among those aged 25-49 years, (Ntswaki’s age bracket) the rise is the most significant: estimated at  173% by the UNAIDS Day Report.  In 2010 there were an estimated 22.9 million people living with HIV in Sub-Saharan Africa.
Here I am, typing away, seeing her face in my mind’s eye.  More than a statistic to her family and her students and her co-workers and my friend, Ntswaki s the face of AIDS in Sub-Saharan Africa.
Beautiful, educated, and ready to live her life to the full.
Posted by Brazen Princess at 10:25 AM