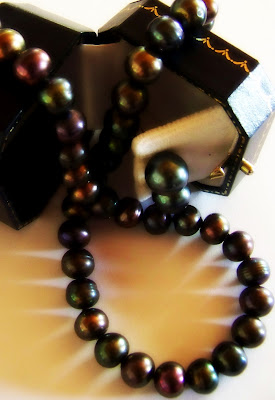 My favorite Valentine’s Day gift is a set of black pearl earrings, with a matching choker strand, given to me by Mario, my husband, many years ago.

Jewelry has always been a tricky proposition for me. My lifestyle and my beliefs shape what I do and don’t wear. I have always admired well-cut diamonds, but not worn them, mainly because the working conditions in the mines are so horrible. What we have seen of the diamond industry here in South Africa, we do not admire. The same case can be made for gold and silver, but the precious metals are everywhere, and my most prized possession is my wedding band, a simple 10 karat gold band.

What ends up happening is that I wear very common baubles, costume pieces that change with fashion and are pretty inexpensive. In reality, I am usually bare of adornment, mainly because of our work (relating to the very poor is not done well, even in costume jewelry). Once, we were burglarized, and my jewelry box rifled through...but nothing was taken. This is indicative of what I wear.

I was a young girl when I fell in love with pearls.

My Nana used to wear a strand with a clasp as beautiful as they were. Delicate and Irish, and as luminescent as her pearls, she would tell me that they were a gift from her late husband.

“Good pearls,” she said, “light up a woman’s face.” It was true with her, and she glowed when she wore them. After she died, the same pearls lit up my mother’s face.

In researching how they were made, I was equally fascinated with the process. Oysters (and many other molluscs) have an outer shell that is made of two parts, or valves. The shell's valves are held together by an elastic ligament. This ligament is positioned where the valves come together, and usually keeps the valves open so the oyster can eat. 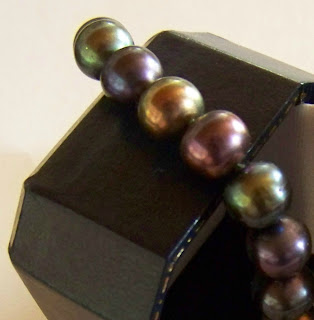 A mistake happens: an mollusc swallows sharp debris (usually a piece of rock sand) and can’t spit it out. To lessen the effect of irritating debris, the animal tries to ease its discomfort by coating the speck in calcium carbonate, which hardens around it to form a pearl. The inside shell (nacre) of an oyster determined color, luminescence and beauty. Since most nacre of oysters is usually a glossy white or silver, the fruit will be a glossy white or silver as well.

To have such beauty be born of pain gives me hope for the dark areas of my life.

Black pearls are made by a species of oyster called Pinctada Margaritifera, or the “black-lipped” oyster. Historically, they are mainly found in Tahiti, so they began being called “Tahitian Black” pearls. In the past, black pearls were amazingly expensive due to their extreme rarity. Approximately one in ten-thousand oysters produced a black pearl, and of these a small fraction was of adequate luster, shape and size to be desirable. In recent years, because of culturing (pearl farming), the pearls have become more predictable- and less expensive.

Although manufacturers can dye pearls black, it takes extremely rare conditions to form pearls that have that dark, eerily iridescent glow.

When I opened my gift many, many years ago, I gasped. The earrings were in a box similar in size to an engagement ring box, with an inside a brilliant white. The luminescent rainbows before me spoke to me of a long-lasting love and beauty that is possible through rare pain. I didn’t know what to say.

“Why did you buy them for me?” I asked him. I have to say, as beautiful as they were, all I could imagine was the expense.

I never asked for them, he probably only heard me telling a story similar to this one that I have told you. He dissected my stories of admiration and my love for my Nana, my adoration of pearls and the way they can turn an ordinary woman into a queen. He listened and watched as I would tell stories of the darker nacre of the black lipped oysters, influencing the rainbow of the black fruit that would eventually emerge.

And then he bought them for me: two perfectly farmed black pearls, which glow against my skin and make me feel like I am worth a great price to the man who gave them to me.

Three months later, for Mother’s Day he gave me a choker strand to match. “This wasn’t as expensive as the earrings,” he said, almost apologetically. I marvelled at them, and there, in gold filigree, was the clasp that was like my Nana’s. Almost as beautiful as the luminescent beads they held together. 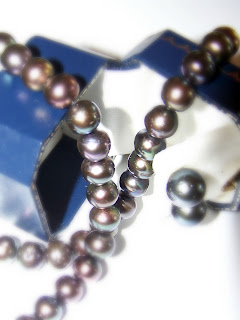 I wore them this past Sunday, and as I put them on, I thought of how beautiful and rare they are to me. They are among my prized possessions.

One day, they will light up my daughter’s face.

Pearl, pleasant to a prince's pleasure,
To cleanly enclose in gold so clear,
Out of the Orient, I boldly say,
None ever proved her precious peer.
~from “Pearl” a middle-English poem

Posted by Brazen Princess at 6:24 AM