On the day David was born, Mario drove his then-wife, Cathy, in his patrol vehicle—red lights and siren-- to the hospital for the birth of his first-born son.  Mario couldn’t stop taking pictures of the baby’s face.  He was wet, wrinkled, and astoundingly perfect. To this day, we call those pictures “the face pictures” –a whole roll of 36 pictures he took with his new camera.

David is Mario’s first-born son, only five years old when Cathy and Mario separated.  Cathy moved to Kansas—to be near family—and Mario stayed in California—being a state employee and rooted in California.

I met David at the tender age of six, and we hit it off right away.  Since I’d been working for Mario at a State Park, the first time I saw David—and Joe—they were with Mario, all dressed in shorts and polo shirts.  They were on their way somewhere, but Mario had to take care of an important piece of business, and walked through the front door of the State Park dressed in civilian clothes and two little boys in tow.

“Do you guys want to color at my desk?” I asked them, after Mario introduced us.  I was really trying not to laugh—David looked like Mario so much—and I finally had to say something.

“Hard to tell this is your son,” I said to Mario, who was sorting through his mail.

“They’re both mine,” Mario said, smiling at Joe and David. “That one just looks more like me.”

“Joe looks more like our mom,” David said, pointing at his brother’s hair.  “See? Light hair like Mom and I have dark hair like Dad.” As he continued to tell me what Mom was like, the boys and I drew a turtle on white paper, using crayons I found in my desk—probably left there by the previous secretary, who had kids.

Eventually, Mario and I blended our families together, a trend becoming more common in the eighties. David and Joe were part of Mario’s family, just as Vince was a part of mine.  Soon, we had a baby girl, Alicia, who made our boys band together and become big brothers. We made our home in California, while David and Joe grew up in Kansas with their mother, Cathy.  We would talk on the phone often, and write letters—by hand!—but mostly we lived in a strange state of grief at the distance between us.  We looked forward to the summers, when they would fly out and we would take family vacations.  That day at my desk, as David told me about Kansas and Mom, and all of the things that he was planning to do in the summer, I couldn’t have seen this all coming.

David was introduced to computers at a young age—his father's Kaypro, with only two or three games to go with its word processing capabilities—and seemed to understand the inner workings and basic language well.  Back in those days, we limited the boys to half-hour slots, and it makes me laugh to think of David now, who spends so much of his time on computers.  Behind his work desk, with two or three screens going at the same time, spending hours on end with computers, he knows more about hardware, software, and language better than most people in the world.  I couldn’t see that happening either.

When David graduated from high school, he came to live with us for the summer.  Ready to break free of his life in a small town, David prepared himself for college, where he was planning to study astrophysics and pledge to the frat that threw the best parties.  Somewhere along the way, David learned UNIX, an international language that changed his life.  He immersed himself in the growing technology of the day, learning the ins and outs of hardware and software and soon was comfortable moving in the professional world.  He had found his niche in the world of technology—and he was on his way. 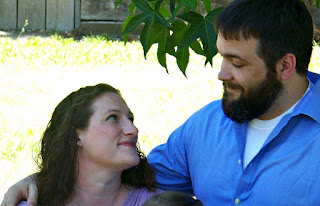 After a series of crazy girlfriends, David finally met his wife, Lennae, who was a perfect match for him.  They have three children, who were our first grandchildren.  These babies who stole our hearts are now teens and pre-teens!  The same heartache I felt being separated from David and Joe, I now feel for their children. Here we are in California, and there they are in Kansas.

Today David turns 39, which I figured out with my calculator because my brain is in denial. I thank God for David because he is more than a step-son—he is a son to me: a wonder and a beautiful part of my heart. Thank God he is not riding bulls anymore. Thank God he found Lennae.  Thank God I love his mother and we are friends.  Thank God he loves me as his step-mom and always has.

HAPPY BIRTHDAY, DAVID!!  You are one of the greatest blessings of our life, and we love you!

Posted by Brazen Princess at 3:03 AM