The first time I met him he was wearing a green-striped shirt and following David, his elder brother, into Mario’s office.   This is before Mario and I were dating, and our relationship was boss-employee.  I loved working for Mario, the most organized boss ever; as a single mother I appreciated his humor and discipline. That day, however, he looked over the counter and smiled at me.

“Boys,” he said in a voice reserved for his children,  “this is our new park aid, Janet.  She’s brand new so don’t bother her.  She’s still trying to learn how to type.”

I rolled my eyes at him, but smiled at the kids.  The two boys  (David, 7, and Joe, 6) walked over to my desk, and started telling me about their recent airplane voyage from Kansas  City.

“That’s where our Mom lives,” Joe said, dreamily.  He had sandy, blonde hair and blue eyes, and he looked at me when he spoke.  David was brown haired, brown eyed and the talker of the two.  He was quick to tell me that he would soon be eight-years-old.

David and Joe drew pictures at my desk as Mario made a few phone calls in his office.   They were filled with observations and questions.  They wanted to use my new electric typewriter.  They told me they had just ridden a horse the day before and Joe actually fell off.

“But I got up and got back on,” he said.  It wasn’t hard to tell he was proud of himself for getting back on the horse. I didn't even imagine that Joe would one day become quite an accomplished horse rider , a genuine cowboy, and that he and David would break and care for horses with such skill that they could make a living at it. Joe would also become an honor student, a star football player, and graduate high school in favor with his teachers and classmates, voted most likely to succeed. That day he was just a boy who was coping with his parents' divorce, and my heart went out to him.

I went to my boss’ house for dinner that night, more at the invitation of the boys than of him.  I got the feeling that they all liked me there, a woman in the shadow of all these guys.  I was also delighted to watch them together.  David was bold; Joe was thoughtful.  They were fun and respectful and I loved the relationship they had.  I ended up marrying Mario eighteen months later,  even though I was clueless of my true feelings for him that first night.  It was easy being with him and the boys, eating cold chicken and salad together, and later reading books.  I read four or five books aloud to the boys that evening as Mario washed the dinner dishes. 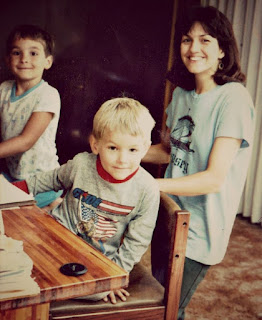 “Why are you leaving?” Joe asked me as stood up to leave.

Mario laughed from the sink and shouted, “Because she doesn’t live here!”

“I have a baby,” I answered  Joe, smiling.
Joe leaned against the chair and looked at me.  "Is it a girl baby or a boy baby?”

“Why don't you go home and get him and bring him back here?”

I looked up at Mario who was smiling.

"Okay, bye," Mario said, emerging from the kitchen, drying his hand on a towel.  "Thanks for coming over."

I left that night, not knowing it would be the first night of many--nights where I did go home and get Vince and bring him back to Mario's place.  We all got along so well, and I loved seeing this side of Mario.  We were good friends and once I allowed myself to, we fell in love. 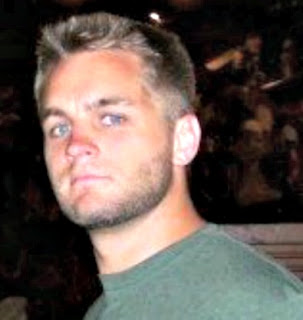 In many ways, I saw David and Joe as a package deal when I married Mario, but I soon learned to appreciate them as individuals.  Joe expressed his emotions and reasoned through every decision, just like his father.  Even as a teenager, he was kind and funny, tender and strong, analytical and careful.

Not long ago, Joe married Ariel, the woman of substance that brings out the best in him.  She lights up his world, has a beautiful smile, and appreciates who he is.  Want to know the beautiful thing?  When he met her, she was a single mother of a young son.

Over the years, I have amassed thousands of memories and thousands of words to describe Joe, but none come as close as this: he is just like Mario.  Even the way he fathers his delightful sons reminds me of his Dad...and I can think of no greater compliment.

Today is his birthday, and I think of how far he has come.  Now a father to three boys, he juggles work, home, and family with care and purpose.  Every day I am proud of him.

Happy Birthday, Joe! We love you, so, so, so much!

Posted by Brazen Princess at 1:20 AM

Email ThisBlogThis!Share to TwitterShare to FacebookShare to Pinterest
Labels: Happy Birthday, Joe! We love you!!