Mario and I have been married 30 years today!

Tonight, I asked him a question. “I’m blogging about our anniversary later. Are you in?”

He raised his eyebrows and looked at me.  “What do you mean?”

“Come on, babe,” I said, insinuating that he should have been expecting me to ask him about this.  I do this every year, for crying out loud.  “What if someone asked you the key to staying happily married for 30 years?  What would you say?”

Mario looked over his dinner plate—he was polishing off a lamb chop.  “That’s a loaded question.  Can I get back to you?”

I started cleaning up the kitchen, since my daughter-in-law made dinner, and returned to my desk about fifteen minutes later.  Mario handed me a yellow post-it note.  “This is all I got, sorry.”

I looked down and saw a list, one that he had just written.  Mario is a list-man.  In response to my inquiry, he made a list of what he would answer if someone asked him for the secret to a long and happy marriage.

“That’s all I got,” he said, shrugging and trying not to laugh.

I should end this blog here, with that cute little story, but I won't. If anyone is curious, I'll explain the items on his list; it’s pretty cool.

Mario and I make each other laugh—sometimes in response to terrible circumstances.  If you want to bond with your partner, laugh together.  Mario has a great sense of humor; I love to laugh.  This makes us a good team.

Humor is a weapon of love; laughter releases endorphins. Whenever we share humor, we admit that we don’t take ourselves so seriously.  We laugh to connect with each other, but also because we’re both pretty damn funny.

Mario underlined the word “to” twice.  We are servant-hearted people by nature.  We both believe in the love-language of service to people.  If he asks me to do something, I do it—gladly.  The same is true for him serving me, and I would probably say more so.

Service gets your eyes off yourself—it is a chance to do something for someone else and in doing this, you invest in their life.  Who better to invest in?

3.  Admiration of each other’s gifts.

Mario is athletic and I have attended more than one wrestling match, track meet, and softball game.  I am his head cheerleader.  He thinks in lists and equations—I admire this tremendously and look to him for his organizational eye when I am writing. I am social and creative; Mario loves to hear me tell stories.  He is my first reader, editor, sounding board, and counselor.  He is wise; I am compassionate.  We know each other’s value and with each passing year, we are more and more grateful for the other’s  incredible gifts.

This is one that I need to explain.  Mario and I have not always been happily married—in fact, we’ve come close to splitting up.  When we were in counselling (about twenty-three years ago) one of our counselors explained that we were essentially fighting with the person inside of our spouse—our inner five-year-olds.   She suggested we carry pictures of our spouse at five-years-old.

When I met Mario, he was my confident boss; I was his beautiful employee.  Once we exchanged pictures of the little kids we once were, my heart broke.  Mario’s portrait was of a careful, frightened boy with messy hair.  His eyes held the sadness of the whole world.  I looked up at him, and realized that my words had been wounding this precious child.  I have never seen him the same—and I carried that picture around for years in my wallet.

So, the short story is, if you wouldn’t cut a five-year-old child down in your anger, don’t do it to your spouse.  Maybe the other part of this story is—get help if you need it. A good counsellor is worth their weight in gold.

How fitting that this comes after the 5-year old pics.

Once a fight is over—maybe while it is still going on—make the decision to forgive.  Forgiveness is not some magical feeling that descends from heaven, it is a decision, like love.  Forgiveness is not forgetting, it’s not excusing, it’s not even being nice to the other person.  It’s recognizing the other person said something wrong—or did something bad—and deciding to throw that thing into the sea.

This concept doesn’t apply to behaviors associated with addictions.  Addiction is the equivalent of acid in a relationship. If you have an addiction (to ANYTHING) ditch it.  If you have a negative pattern of doing something, break it.  If you need help, get it.

So forgive.  Often.  Forgive so much it feels like you’re the one doing all the forgiving.  It’s like medicine…

Mario wrote (eventual!) in parentheses after this. For those of us who like to be right, humility is a tough concept, but a necessary one.  Think of being on the same, level playing field with your spouse, since you are fellow travelers in this marriage.

When making decisions, it is important to (eventually) agree.  Have the humility to admit that the other might have a better idea than you, or might know as much and have a different opinion.  So many unnecessary fights are started because one partner thinks they are right and the other is wrong.  Usually, Mario and I are both right—and both wrong—but we listen to each other thoroughly before deciding.  I trust Mario; he trusts me.  We are co-laborers in the same life—what good would it do for one of us to rise haughtily above the other? 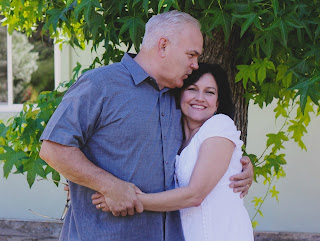 I am deeply devoted to Mario, and he is to me. I will think of him first above anyone else; I will never even consider another man the way I do him.  He champions every dream I have, even if it seems inconvenient at this point in our life; I support him in every endeavor. We are each-other’s cheerleaders, best friends, and greatest admirers.  I am loyal to him and he to me.  This devotion might seem sappy or old-fashioned in today’s world, but it works for us.  After all, it is genuine.

Mario and I are Christians, so we share a common faith. We believe in a God who hears us and communicates with us.  Our prayer life is something that is private, between us and God.  And yet, when we join to pray there is something incredibly intimate and special—and powerful. We both feel very blessed to have this as part of our relationship--and we know it is necessary to our survival. 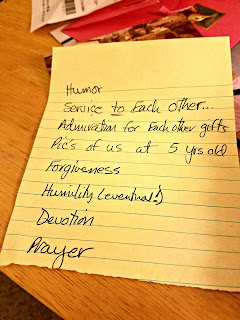 So that’s Mario’s list.  I think it is a pretty good list—and to think he did it in just a few minutes makes me laugh.  “That’s all I got,” he said, handing it to me while trying to suppress a laugh. He knows very well that his list is awesome—written on a piece of yellow paper like it’s a simple note.

In fact, it’s almost like a love letter, isn’t it?

Posted by Brazen Princess at 1:47 AM

Email ThisBlogThis!Share to TwitterShare to FacebookShare to Pinterest
Labels: boo-yah baby!!, happily married for 30 years, I love me some hunkahunka Mario