The story of Zuzu is one of a rescue.

Mario and I had been in South Africa for three years, but we had a sudden change in ministry.  We went from being a couple who travelled all over sub-Saharan Africa to one who worked in a local church.  We travelled less, but were just as involved in ministry.  The change triggered a longing in me to go home—or at least to feel at home in South Africa.

“Tell you what,” he told me, “we’ll get one when we become permanent residents.”

Mario had said no on more than one occasion to a dog –we were in a foreign country, we still were travelling, we were not yet permanent residents…  The truth of the matter was that we had applied for permanent residency a year earlier.  The application was still not processed; I felt it never would be.

I went to the SPCA thrift store in Northriding (just outside of Johannesburg) to look for a good, standing lamp.  They had none, but on my way to the car, I could hear barking….and I went in just to see the dogs.   I walked through the aisles of adoptable dogs, maybe because I was looking for a friendly face; maybe because I liked to torture myself.

I passed the kennel where a small dog was sitting in the sun, I saw her face and she saw mine.  I can’t explain the unusual connection I felt with this dog –she wasn’t even the kind of dog I normally liked.  She looked like a Chihuahua, with large brown eyes.   I looked at her name on the outside of the kennel: XUXIA/Miniature Pinscher.

I knelt down to be next to her.  She put her little paws up on the grate and I stroked her fur through the bars.  After about five minutes of just sitting together, I got up and left…but not without asking about her.

“She’s going to go fast,” the SPCA lady told me.  “Min-pins are a popular breed.”

I went home and researched Min Pins–miniature pinschers.  “Assertive and proud, athletic and agile, the Miniature Pinschers act like they are the biggest dogs on the block, and are often called ‘King of the Toys’.”

Of course I said nothing to Mario….

I went home and confessed everything to Mario.  “Please, babe… I really want a dog.”

He relented.  “Alright, go back and if she’s still there, you can adopt her.”

The first day I brought her home she slept in my lap, groggy from being spayed.  She slept next to me as I sat on the sofa.  Mario and I renamed her “Zuzu” –which sounds like Xuxia, but had a little American George Bailey in there. 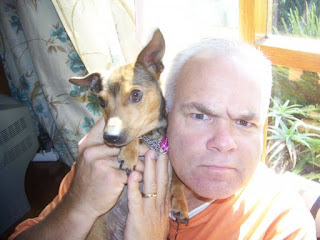 Every morning Zuzu went on a walk with me.  In the evening when all our work was done, we came home to her cute little face and she acted like I was her favorite person in the world.  Mario pretended not to like her, but he wasn’t fooling anyone.

As much as we learned about Minpins, we had much more to learn.  First, they are not loner dogs—they like to pack.

“She has social needs,” a fellow owner told us.  “She needs friends!”

We took Zuzu outside to play with all the dogs on the property, but she was kind of bossy and didn’t make friends.  She was territorial and hilariously jealous.  She nipped at the heels of the bigger dogs, who stayed away from her afterwards.  We decided to adopt another dog who she got along with better, but after several failed compatibility tests with other peaceful dogs at the SPCA, we decided to get a puppy for Zuzu to call her own.

The Puppy’s name was Peaches, but Zuzu ignored her for the first week.  Finally, they became friends.  Zuzu and Peaches –they were our four-legged kids in South Africa that made us feel like we were home.  Zuzu had a supernaturally brilliant mind; she knew the difference between right and wrong, good and bad.  She hunted moles and rats on the property and eventually became friends with every dog on the property.

Peaches, by comparison, was not the sharpest tool in the shed.  She followed Zuzu everywhere and seemed to have a great time prancing around, doing whatever Zuzu did.

When it was time for us to leave South Africa, the dogs came with us.  They were professionally moved by a company who packed them up in wooden travel crates and shipped home to friends in Kansas City.  They offered to keep them until we could buy a house and make a home.  It took us three months before we saw them again.

The dogs moved three times with us –the last of which was at the house we live in now.  They seemed to be good with moving; they learned to adapt in many different situations.

Moody and sweet, bossy and tender, nervous and often constipated--Zuzu was definitely my dog. 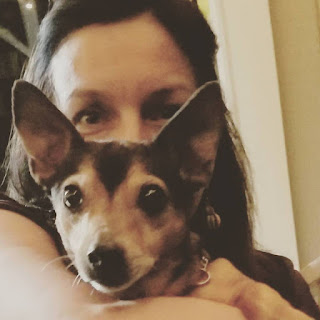 It wasn’t until Sunday that we realized something was wrong.  She was staggering around and falling down.  She had no energy.  She threw up a good deal and when we took her to the vet they looked at her gums and told us, “This is a very sick dog.”

I looked down at her and she looked at me, and as always we connected.  Those eyes were the eyes of my most faithful companion through a myriad of changes, the eyes of a beautiful little dog who had been with me no matter what.  Those were the eyes of a dog I loved with my whole heart.

In two short hours, our lives changed.  We were forced to make fast decisions--after the vet showed us test results of an especially aggressive, fast-moving auto-immune disease.  We decided to put her to sleep, since it was more humane that watching her suffer.  We decided to cremate her body, instead of bury her in the backyard.  We decided to leave her bed behind when it was all over, unable to look at it without Zuzu in it.

I type this in tears, unable to really articulate how much this dog impacted my life.  I also realize that most of you know what I am talking about—that dogs are more than pets.  They sometimes really are our best friends.

We animal lovers like to call it rescuing—especially when we adopt a dog or cat from an animal shelter.  “This dog is a rescue,” we say proudly.  But the story of Zuzu is all in the beauty of how she rescued me.  She literally pulled me out of a depression, and made me feel like I was home in a foreign country.  Every day she was alive, she made me feel like the best mother in the whole world.  She brought joy, play, exercise, silliness, awareness, and love into our lives—and kept it there.

We will miss her far more than words can ever say.
Posted by Brazen Princess at 1:29 AM