On Sunday, our house was swarming with honeybees.  They started to swarm on Thursday, outside the front door, along the ledge of our entryway.  Each day the swarm increased until today, where, as if to celebrate Mario’s birthday tomorrow, they are swarming outside and inside of our garage.  Not wanting to use pesticides, we called a local bee keeper who promised to pick them up tomorrow evening.

“You know we’ll be at communitas tomorrow,” Mario said, right after I told him.  We were in the kitchen, where I had just finished making chicken enchiladas and a cake for his birthday.

“Are we going?” I asked.  “I mean, tomorrow is your birthday!  We’re supposed to have a birthday dinner together.  We just got this new dog.  Now the beekeepers are coming…”

Communitas is a gathering of our friends, kind of a Bible study.  Together we decided to read the Bible all the way through in one year, using a structured and disciplined approach. We meet on Monday evenings to get together and discuss.  Communitas is a Latin noun, loosely translated to mean “a community of equals, friends who are experiencing liminality together.”  I love these friends…but really?

As I sit here, writing Mario’s birthday blog, I realize that this is an example of Mario being steady and focused, even in the midst of chaos.

When I met Mario, 31 years ago, this was one of the first things that impressed me.  He was steady and strong—calm under pressure.  This was a rare quality in a young man; it still is.  When we became Christians, Mario’s focus became even clearer.  Each decision he made is now measured by what will bring him closer to Christ.

Tonight’s conversation about bees, our new dog, enchiladas and birthday cake illustrate how normal people can sometimes feel overwhelmed by their lives.  In my world, I’d rather retreat, lay a nice table, provide a delicious blessing for Mario, and wave goodbye to that pesky swarm of bees.  But that probably won’t be the thing that that Mario wants to do tomorrow night for his birthday.   Mario will want to go to communitas because we’ll focus on God with our friends –and God is who makes Mario strong and steady.

Today is Mario’s 63rd birthday.  I cannot believe that he is 63.  Something must be wrong; time is spinning out of control.  Usually I blog about what a hunk my husband is and how I can’t believe he married me.  Tonight, I write about a piece of our lives, and the One who Mario looks to in order to keep his path straight.  Imagine living with someone who thinks like this—and then make him a hunk.

That’s how cool my life is. 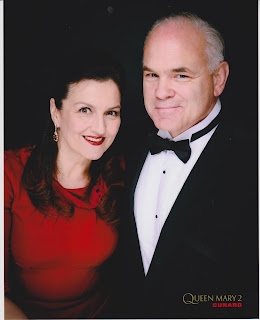 Posted by Brazen Princess at 11:54 PM

Email ThisBlogThis!Share to TwitterShare to FacebookShare to Pinterest
Labels: Happy Birthday Mario, How much I love this man!