As I tapped my foot impatiently for the right man to come, I held several low-paying, dead-end jobs, including a park-aid for an OHV park where the visitors flirted with me shamelessly.  My boss, a Chuck Norris type, had just the right amount of concern and protection.  “You’re pretty friendly,” he’d say to me when I complained about the unsolicited attention.  “They might think you’re interested.”

My boss was a divorced man, older and wiser.  He also ran the place and I was obliged to listen to him.  He gave advice only when I asked him for it, unless he was telling me how to do my job better.  I knew him only a little.  He was a friend of Lisa, one of my mentors,  respected as a leader in his department and worked tirelessly for the State Park Peace Officer’s Association, even though he was a Republican.  Tall, handsome, and muscular, Mario was seen by many women as an extremely eligible bachelor.

Even in the workplace, women seemed to become softer  around him. I used to tease him about this, and he brushed me off.  I was not one of the swooners. Nine years older than me, Mario was not my type.  I was attracted to younger bad boys, usually Democrat musicians who were between jobs.  Mario was so clean-cut, a definite square -- and my boss.  Nevertheless, we became friends and I trusted and respected him.  I could tell he appreciated me as an employee and the symbiotic relationship worked in our office.

One day, after a complicated series of events, I sought his advice on a personal issue.  He listened to my story and then offered his advice with humility and sincerity.  I sensed a deep ache in his words, a vulnerability that I had not seen before.

Walking me out to my car, Mario and I said goodbye –and then we hugged.

As I hugged him, I melted into the firm, stable contours of his body.  I felt heaven open and the earth move.  There were angels singing, accompanied by harp music.  Doves bearing long silver ribbons descended from the sky and draped us in the destiny that was now irrevocable: we were meant for each other.

That’s how Mario and I began. 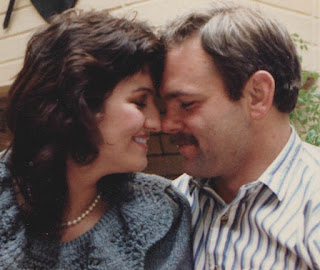 Togetherness was inevitable, but entering a future together was another story.  Instead of sailing off into the sunset and living happily ever after, we were immediately navigating a rock-filled, rushing river in a two-person kayak, using nothing but foam paddles.  We eventually figured out that love, no matter how powerful, was not going to be enough to get us through the life we wanted together, so we developed skills together.  Not just how to navigate the river in our kayak, but how to make it out of the rapids without drowning after it crashed on the rocks.  Through the years, we learned how to seek help when we were miserably stuck, find hope in darkness, and press through tragedy.  We learned how to do all of these things with four children – four beautiful, wonderful and forgiving children.  God and our many friends helped us through the places that were miserable and dark.

Mario, through it all, was a fearless leader.  Together we have weathered many unpredictable storms and come out of them still friends.

My husband is unusually strong and likewise tender.  He is a marathon runner who never accepts defeat and works tirelessly.  Above all of this, Mario is a faith-filled man who loves and understands me deeply. He cares more about the inside of people, their hearts and minds, than any external label anyone can place on another human being.  He’s taught me patience, perseverance and humility.  I love him more than ever—with the kind of love that grows.

This year, as if to challenge himself even further, Mario was part of  Davis Musical Theater's production of Man of LaMancha.  Taking part in the 50th anniversary production of his father's signature play was a huge step out of his comfort zone, but he loved it.

He also just finished writing a tribute biography for his brother, Stephen.  He asked me to edit the text, but it was so touching and beautiful that I couldn't touch it.  This week we took it to the printers and when it showed up, I got tears in my eyes.   What a genuine labor of love for his family!

Today is Mario’s birthday—and Father’s Day!  On this day Mario will “uncelebrate” – hunker down and do what he loves to do best: relax.  For a man who never stops growing and challenging himself, he understands the need for peace and rest!  I can plan a party for him and invite our friends and family – fill the house with celebration and laughter, but that would be for me, not him.

Sometimes I remember the day after the hug – the day when Mario confronted me and asked me what happened.

“I’ve never had a hug like that before.  What did you do?”

He didn’t know what to say, but he looked at me suspiciously.  As a cop, he might have thought that I could be hiding something.  I swear I’m not hiding anything, babe –but feel free to search me!

I love you, Mario.  Happy Father’s Day and Happy Birthday.  How did I ever get so lucky?

Posted by Brazen Princess at 12:26 AM