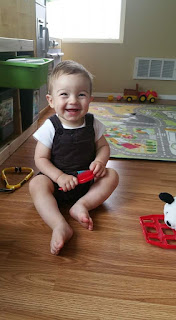 Every child enters the world with a story.  Their story highlights them as beautiful and special.

Harvey’s story is one of freedom and unexpected calm.  He was born one day after his parents, our son Joe and his long-time girlfriend, Ariel, were married.  A home birth, Ariel had a team of midwives surrounding her as soon as serious labor set in. One of these midwives was Joe's baby sister, Seantel. 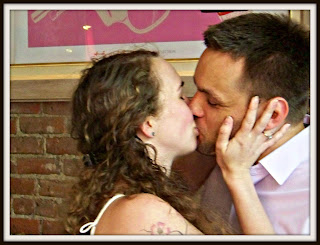 Mario and I arrived at Joe’s apartment only to be greeted by Seantel downstairs.

“She’s close, but it’s hard to say how long this will take,” Seantel told us, with a serious face.  It made me want to break out in the nervous laughter that always accompanied my excitement.

“Can you go get snacks?” Seantel asked.  The midwives had been working non-stop and would be hungry after the task of delivering a baby was over.  As we would fawn and coo over the new life, the midwives would chart and be administrative at the kitchen table.

Mario and I headed to Safeway, holding each other’s hands tightly in nervous anticipation.  We bought drinks and cheese trays, chips and dip.  When we were driving back to the apartment, we talked about the challenge of another long-distance grandchild.  At least I did.

“Seattle is a long way,” I told him.  “I wish they could be in California.”

“It’s not so bad,” Mario said.  “It’s a heck of a lot closer than Africa.  At least we’ll see him more than we would have if we still lived there.”  Mario is an optimist—or a realist.  Both mindsets have a way of being fine with what we have and enjoying the moment.  I was already grieving the loss of time spent with a grandchild that hadn't even been born.

We got to the apartment in time for Ariel’s transition.  We met Cathy in the living room and silently prayed for the upcoming delivery.  I was in awe of the smooth, careful breathing I heard coming from the next room.  The Midwives’ voices were louder than Ariel’s soft moans of pain that would bring Harvey into the world.  I remember my own deliveries, and my impatient screams that cursed the painkillers for not being strong enough to mask the agony that wracked my body.  Ariel sounded nothing like that.  Instead, her cries were more like sighs,  and that calm amazed me.

Eventually, the sounds coming from the room became urgent and we knew that our Harvey would soon be coming into the world.

I stood in the doorway with the audio of my phone turned on.  Eventually, I heard the sounds of a baby, a soft cry that became a loud one.  Harvey was here!!  I held the phone up, with tears in my eyes.  No one, no matter how gifted with words, can prepare you for the incredible brilliance of a new life coming into the world.

Harvey was perfect. His face was light and beautiful and he seemed content from the moment he was born. Asher, his newly-turned-four-year-old brother delighted in him. Joe was on top of the world
. 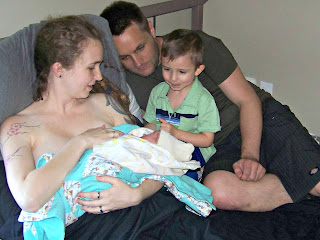 The day was amazingly peaceful.  We all took  turns holding the baby, who looked like a perfect blend of his mother and father.

We left two days later, after sharing Harvey with his normally private family.  I got home and went through my mountain of pictures...sighing st the wonder of him.

The next time we saw Harvey was Christmas, where he had become a mobile baby, playful and engaging those around him.  He had a spirit of contentment and cooperation about him, constantly smiling.  While Asher is usually strong and charismatic, Harvey is relaxed and jovial.  He wears an expression on his face as if he knows a  secret joke that keeps the world spinning.

Today marks one year since he was born.  Just last month his mother sent us a movie of him walking!! What an incredible miracle life is!

We love you more than you could ever know.
Posted by Brazen Princess at 12:53 AM