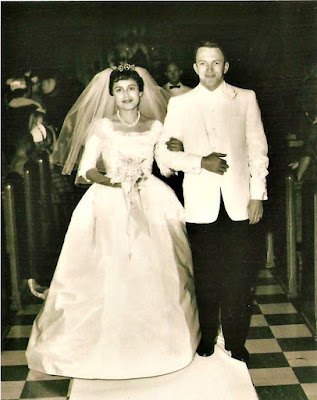 Today, March 8, is International Women's Day.  It is the perfect day to tell you about the most important woman in my life - my Mom.

Her name is Jennie - an Americanized version of her given name, Juana.  She was the fifth child of seven, born to Ignacio and Juana Gonzalez, farm workers whose native tongue was Spanish.  She once showed me the first picture that was taken of her - a black and white snapshot of her and twin sisters when she was six years old.

"My first picture - and I was with my sisters," she told me, laughing.

"Oh, Mom," I said, indignant. "You have no baby pictures?  No single shots of you?  Where are you here?"

My Mom pointed to the bottle she held in her hand.  "We were going to feed the lambs.  That was our job, and they were so hungry they used to almost knock us over!"

She told me these stories without bitterness, about being raised in a poor family with a lot of love. She was born fifth and juxtaposed to her twin sisters, Molly and Emily; the spotlight was rarely on her.  That is, until she became Tracy's Tomato Queen.

That's the second black and white photo I remember: this time of my mother in her early twenties, a beauty queen sitting on top of an elephant, smiling broadly with raven-black hair.  "I had never even been on a horse," she laughed again.  "Now I was riding an elephant on Main Street!"

Then came the pictures of her wedding: the same beauty walking down the aisle with my father, the proud groom.  Then came oodles of family shots: Disneyland and Swiss Family Robinson.  Easter, Christmas, Softball, Mom pregnant and shopping; pregnant and cooking. Five children, like stair steps, one right after the other.  I was born second and refused to suffer the fate of my mother's childhood with too few pictures.  From a young age I made sure that my picture was taken- a lot.

She took pictures of all of us, and soon the woman behind the camera disappeared from the film again.  All of her children in different sporting events, in their school uniforms, several surrounded by a sea of cousins.  I still have pictures of myself  at each prom, each speech team banquet, each event that I deemed important.  Mom even took the first picture I ever had with Mario – in front of the family room curtains before our first date.

The snapshots of my mother (or the lack of them) speak about who she is- unselfish, caring, the woman behind the scenes.  She gives inspiration to all of us, being a woman of deep faith and courage.  She is known as a sweetheart, but she has more grit and courage than most people I have ever met.  She has always been there.  She has been the unmovable stalwart, the unflinching love, the beautiful architect of her home.

Today is her birthday – I’m not supposed to share her age, but she looks fabulous (and is fabulous) at the age she is.

Last weekend we hosted a birthday party for her, where all of her children connected at our house and celebrated her life.  Afterwards, they all  went to see Mario in the play, “ Man of LaMancha”, a long-time favorite of our family.  To think that my parents prepared me for the life I inherited is amazing – a sign of God’s incredible providence.

Posted by Brazen Princess at 1:49 AM