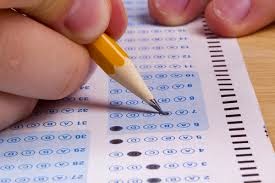 Sooner or later every student has to take an incredibly difficult exam and mine was today.  I've taken a few tests since re-entering college - and I thank God that I've done well.  I was dreading today's test in Political Science because our study sheet (one and a half pages of single-spaced bullet subjects) looked like one of  Lemony Snicket's wicked to-do list.

I studied (hard) for a week but still entered our classroom today biting my fingernails.

"Thank God!" Anthony, one of my classmates laughed.  "I thought I was the only one!"

He and a lot of my fellow classmates had similar feelings about the study sheet - after all, we were supposed to know every detail of our (dense) textbook - plus the two nonfiction books we were required to read - plus three chapters from a companion textbook... plus the first three articles of the Constitution.

I sat down with my three Number 2 sharpened pencils and received the test packet from my teacher. Dr. Jeydel is usually a casual, easy-going professor, but as she handed me the text she didn't look at me.  I felt like a convicted felon who was just sentenced to the gallows... but maybe that was my imagination.

There were twenty five multiple choice questions - all about subjects I had managed not to concentrate on.  They were phrased in a way that made me second-guess my first reaction.

The Framers of the Constitution saw the Presidency as:


By the time I reached the "short answer" questions, my palms were sweating and I felt like calling my Mom.  It was one of those tests.

I hope I passed.  I really do.  All that studying should have meant something.  And I think I studied more about what the President's implied powers, inherent powers, expressed powers, and global concerns were...than what those fricken Framers were thinking!!!

Which is probably where I went wrong.

Did I mention this is an honors class?  God help me!!


A friend of mine nominated my blog for "KCRA's A-List" - Please click here to vote for me!!
Posted by Brazen Princess at 12:14 AM

Email ThisBlogThis!Share to TwitterShare to FacebookShare to Pinterest
Labels: enrolling in junior college at 52, God help me as I try to remember all of this stuff at 52, grandma returns to college, Love writing!!