They say All Americans know what they were doing that morning.  My memories are here:  a new teacher, a worried mother and a robotic urge to continue... 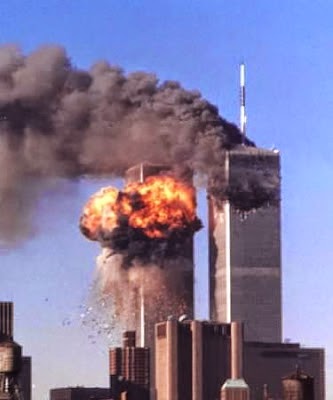 It was the first week of school, and my first year of having a classroom all to myself (I was the “teacher” after spending years as a teachers' aide).  I had spent the summer getting  ready to host young gifted and talented kids, all who would call my classroom home for the coming year.

That morning my own kids, Vince and Alicia, were getting ready for school and I was trying to not be late.  I had been getting ready in my room as quickly as possible, thinking of all the things I had to do that morning.  I had agreed give Justin, another student whose mother worked downtown, a ride to school.  I was busy thinking how I would get my two teenagers mobile, loaded into our van, and pick up Justin - and stay on schedule.

Somehow we were all  were in the van on time and as we made our way to Justin’s, we were fairly silent.

Mornings have never been a chatty time for me - even after two cups of coffee.

My phone rang and I answered it – it was Mario.

“Where are you?” he asked. He sounded panicked.

"Pull over," he said.  My first thought was that maybe one of our grown children was in trouble, or had been hurt.   My second thought was that he was being called out to some riot or skirmish (he had a high-profile job with the Department of Justice).

“Are you pulled over?”

By the looks on their faces, Vince and Alicia could hear what their dad was saying.  They were attentive to his voice on the other end of my small cell phone, since he was speaking so loudly.

“Okay,” I said as my van idled on a random corner that overlooked the back of Justin’s house.

“The World Trade Center has been hit,” he said.  I didn't understand the magnitude of what he was saying.  Hit?  How?  My ears started ringing. Mario’s parents lived in New York City.  I thought of their safety, but I needed to know more….

A flash of information fluttered like confetti  in my mind: Attack. Terrorism.

There had been a similar attack a few years before- the WTC was targeted by Muslim extremists and a car bomb failed to bring the tower down.  The Jewish Banking System’s capital was there and things had been heating up between the oil dependent USA and the oil providing Middle East.

I could hear a commotion from Mario's side of the phone, and he gasped.  “Both Towers have collapsed.”

What did that mean?

I felt slapped in the face, but I faced the kids, who were looking at me.  “The World Trade Center was hit by two airplanes,” I said.

“And the Pentagon,” Alicia said.  She knew something I didn’t and the news didn’t seem as surprising to her.

“YES!” Mario said.  “The Pentagon, too.”  HE was distracted – I could tell he was watching news reports – probably with others in his office.

“Were you watching TV this morning?” I asked Alicia.

In the middle of this emergency, all I could do was to chide my daughter for breaking house rules that morning.  We didn't allow TV before school.

“Yes,” she answered.  I nodded, but I looked back at Vince.  The news seemed surprising to him, but he looked at the clock and then back at me.  We were going to be late for school.

“I have to go,” I said to Mario.  I was in shock but I knew I had to function for the kids.  I also thought about the kids in my classroom – and their families.  I had to pick up Justin.  I had to get Vince and Alicia to school.  I  saw the future as the next half-hour of my life.  Get Justin- get to school.

“I’ll be home as soon as I can,” Mario said before he hung up.  Translation: we will all soon be home- all of us together.  Safe or not safe – together.

Justin knew what was going on and started to talk about it in the van.  It gave us all license to speculate what had happened.  All of us seemed to know it was a terrorist attack and that it was most likely coming from Muslim extremists.

This was not over.

I knew school would be a good  place for them all to process this thing together.  Teens need peers to process.

By comparison, I was going to a classroom of kids whose main support were their parents.  I would be the “delivery system of normal and safe” that I was trained to be as a teacher.  Would any of them be there?

I drove to school, my heart in my throat and a feeling of wariness.  I had to get to school.  What would I do?  What would I say to the kids?  I drove, carefully.  I tried to react to everything carefully.  I arrived at school, the parking lot bustling with familiar scenes: kids dashing to the halls to chat with each other, parents dropping off...

I knew better than to demand my kids kiss me before they exited the vehicle.  I would check on them later....

I walked toward my classroom that morning, smiling at the kids on the playground. On the way to my classroom the principal, Pastor Greenfield, stopped me to see if I had heard the news.

"I have!" I whispered, carefully.  "You want to give me some direction on how I should conduct myself this morning?  What should I say?"  I felt very scared and cautious.

"Why not follow their lead?" he said, rather comfortably.  "See if the kids bring it up.  If they do, explain that they are safe here and that it will be a normal school day.  Encourage prayer.  God is in control, as always."

He turned to another teacher who asked him the same thing; I walked slowly toward the classroom to begin the strangest, normal day of my life.  I was the one who was supposed to be calm and provide peace?  Tall order for me...

That morning I realized how vulnerable our country was to random acts of terrorism.

That kind of feeling doesn't go away easily.

Posted by Brazen Princess at 11:16 PM

Email ThisBlogThis!Share to TwitterShare to FacebookShare to Pinterest
Labels: 911, God is in control, love my country, remembering