The massage oil is lost; I’m hoping in no permanent sense.  We had it when we moved here; I remember assembling our night stand when the furniture was unloaded from the large container they parked on our driveway.  It was literally a boxcar and looked foreign in the neighborhood, announcing that we had moved here from a foreign country.

“¿Donde estas ir?”  One of the movers asked me, to which I answered:

I had fallen out of practice speaking Spanglish.  There was almost no need of it after being separated from California for seven years.  That’s how long we lived in South Africa.  Seven years straight, if you don’t count the four month trial move we did before the permanent one.  For the seven years I lived there people referred to me as a white lady.  I am Hispanic – a race that doesn’t exist in South Africa.

After the mover unloaded the nightstand, I adjusted the drawers.  That’s when I saw the Arnica rub, the analgesic massage oil.  I used it to message Mario’s shoulder with it at the end of the day, especially tough ones when we helped someone move or had a church clean-up day.  Next to it was the Neutrogena Massage oil, one that was designed for simple back rubs – one that didn’t have any analgesic properties, but smelled like fresh cucumbers.

I held it the bottle of oil my hands while I heard the din of furniture being moved all around me.  The small rooms of our new home soon became filled with disassembled furniture and cardboard boxes that all were marked “South Africa” just to remind me where they came from.  The furniture was loaded into the same container that now choked our driveway, two months before.  It was there we watched hopefully, as eight men from the Johannesburg-based moving company fit our possessions into it as if it were a large Jenga puzzle; some boxes were removed and unpacked, then fit in again.  Our gardeners watched and waited, then accepted the possessions we decided just could not fit, no matter how hard we tried.  My maid got to keep our guest room mattress after all.  Portia would get the mattress set we slept on just the night before.  Our beloved landlords would get to keep the refrigerator we bought at Game, the nicest fridge I ever owned.  I had no tears; they required too much connection and thought.  By the time the container drove away, I was devoid of both.  Mario and I ambled across the street, exhausted.  We collapsed into the waiting beds that our friends, Bonnie and Terry had for us, after some dim conversation and good red wine.

This morning I looked for the massage oild when Mario rubbed his troublesome neck.  Mario attended University on a full scholarship because he wrestled competitively.  His tuition was paid for because he made the school look good with a significant amount of wins for the program.  He paid for it with neck and shoulder injuries, like a modern-day gladiator. I’m the gladiator’s wife.

“Let me rub that out for you,”  I tell him.  He is at his computer and I’m at mine.  It’s impossible to ignore that he’s in pain and needs help.

“You don’t have to,” he answers, insincerely.  Mario loves it when I rub out his neck or aching back.

I go into our bedroom and start searching the drawers for the massage oil and I can’t find it.  I decide to ask him if he’s seen it.

“Babe, I haven’t seen it since we’ve moved.  Maybe we didn’t bring it.”

“I saw it when we moved in.  It was in the second drawer of your nightstand.”

I return and look in every drawer of the nightstands.  Mario’s top drawer has the books he’s reading.  The second drawer has a cache of candy that I’m not supposed to see.  I’ve given up sugar and have lost fifty pounds since we returned (I started taking responsibility for my compulsive patterns.)  I recognize the Payday candy bar and salivate.  I close that drawer quickly.

The last drawer has a deck of cards, an ashtray, a jumprope and several airplane gift bags ( the ones that contain socks, earphones, a blindfold and a small toothbrush).  I didn’t know he kept those there.  No oil.

I decide to look at my nightstand again. It is covered by three stacks of books, all of which I say I’m reading.  The stacks are impressive and invite me to abandon my search and curl up with one of them before dinner.  If my husband were not in pain, I would.  Top drawer is eyeglasses, inhalers, combs and hair ties.  Second drawer is a vanity kit, Kleenex, more books (!) and random pictures that I have scanned and forgotten to put away.  The bottom drawer is a lot of business cards, the wallet I carried in South Africa, my South African phones… and a pile of greeting cards. I move the stack with my index finger and fan out a pile of cards (many of them hand-made) from our South African going away party.

One of the top ones is from Gill and Stewart, our previously mentioned South African landlords.  That’s really not who they were; they were more like our parents while we were there.  We lived next door to them and they were on NCMI’s apostolic team.  The “rented” us our cottage, a home beautifully situated in a beautiful, park-like setting at a rent so low that we knew it was a gift to us.  On the back porch of that home Mario and I would sit and watch violent thunderstorms with Peaches and Zuzu on our laps, breathing air that was deliciously moist.  Within fifteen minutes, the storm would leave and be replaced with a rainbow.  Sometimes we’d spend all evening out there.

On that back porch we had many parties; many gatherings.  We hosted out of town guests and had Christmas parties with the servants.  In the last months, we wept there together, unsure of how to proceed.  Unsure of how, when, and why we needed to exit the beautiful, complicated land. 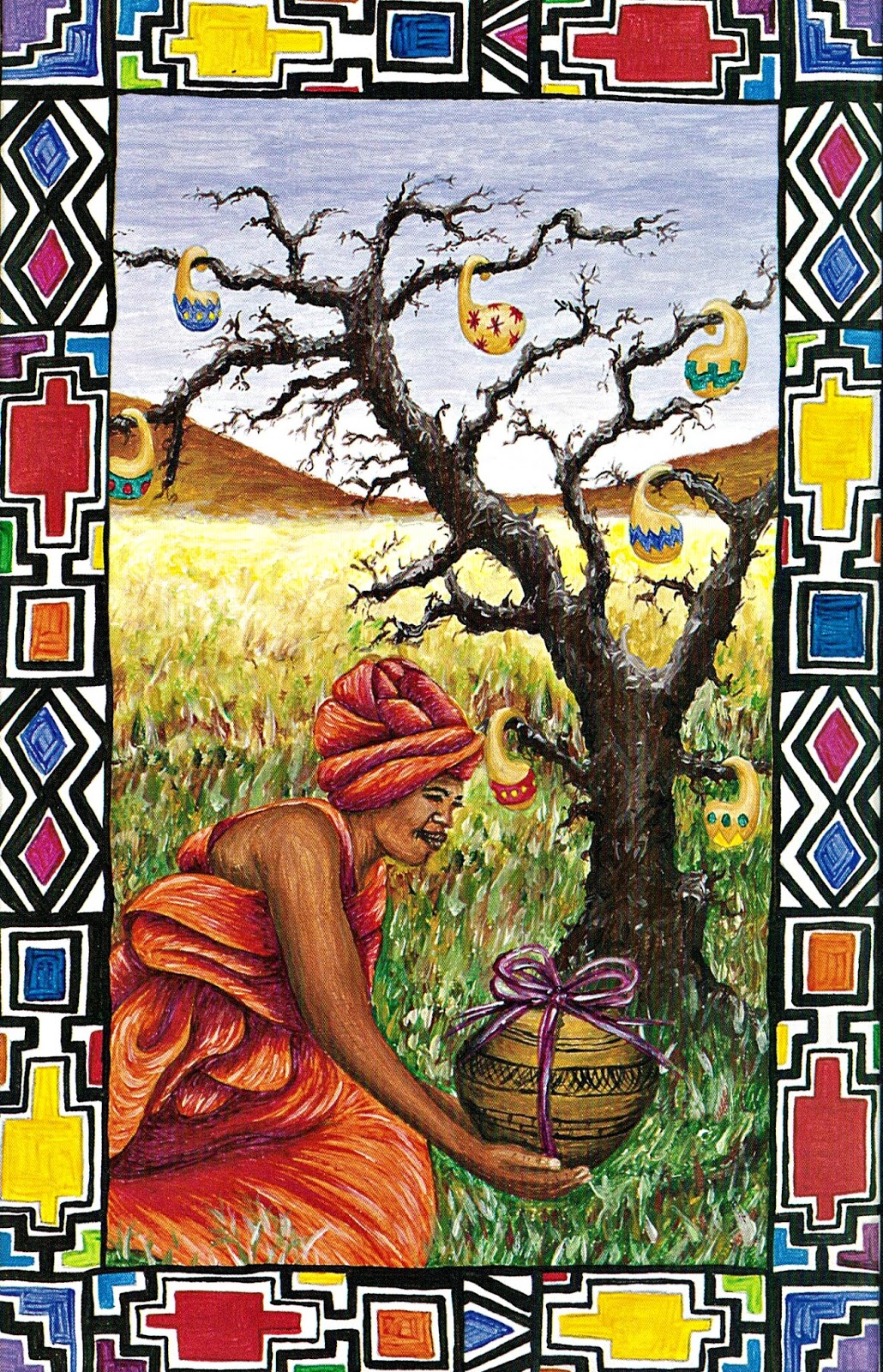 I remove the card that Gill and Stewart gave us from the stack and examine it closely.  Gill knew how much I loved African prints; this one is a masterpiece.  A Xhosa pattern frames the card: bright geometrical shapes outlined boldly in black.  The frame surrounds a woman placing a handmade water jar at the foot of a thorn tree, decorated in gourds that hang from its branches like Christmas ornaments.  I remembered the stand that sold both decorative gourds and the homemade water jars, just around the corner from our cottage on the way to Cosmo City.  The woman who worked the stand had a swollen foot from time to time and we prayed for her.  I wonder now why I never bought a gourd or a water jar from her.   I regret it now, almost to the point of bitterness.

The woman on the card is smiling slightly.  She is dressed like a Xhosa Mama, a traditional wrap on her head that matches her fancy dress.  “The Xhosa ladies always like to look smart,” Monica once told me.  The field that is the background of the card looks like any typical African field: filled with grass and hills in the back ground.  You never know what can pop out of that tall grass at any moment, but you should be ready….

I start to put the card back and shut the drawer, but I can’t.  Yesterday was voting day in South Africa and I can’t pretend my heart isn’t missing home.  I miss Stewart and Gill and our back porch.  I miss Bonnie and Terry and Lorraine and Portia.  I even miss being called a white lady; something no one calls me here.  After all, here they get it right. I am Hispanic.

“I couldn’t find it,” I tell Mario as I come back into the office.

“Yeah, well.”  He’s distracted by his work, but for now the ache in his neck has passed.  Tonight is Communitas and tomorrow is the Prayer meeting I host at my house.  Friday I’ll go see my granddaughters and take them to the park.  Sunday is Mother’s Day, for heaven’s sake; I’ll see my Mom!

I haven’t talked to Portia in more than a month.  I scan the card and decide to do the only thing I can during times like these, I pray.  It was all I could do when I ran across something that made me homesick over there.  Here is family, familiar, the USA.  There is wild, passionate worship,  Diepsloot ... and the piece of me that I can’t extricate from the land.

So I still haven’t found the massage oil.  I’ll keep looking.  Part of me thinks it’s in that drawer with all the candy that I closed quickly.  Sometimes you have to have to move stuff around to see where something is hiding.

Posted by Brazen Princess at 1:27 AM