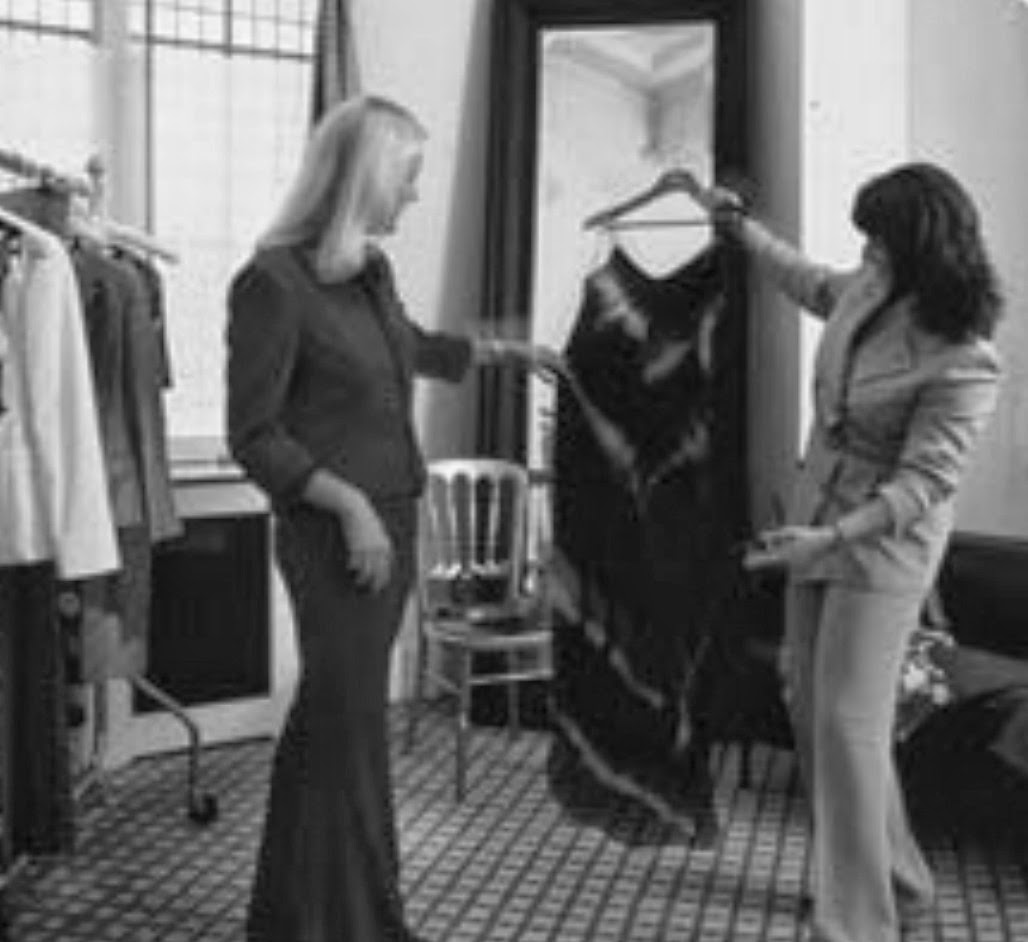 It was Analee Greyson’s custom to shop on the first day of spring and fall – it had been for the past sixty years.  Nothing, in her mind, could ever be worse than a woman letting her wardrobe go.  She found it necessary to acquire the latest fashion to make herself look as modern as possible, and she did it here, at JC Penney’s.  A woman with classic taste should be able to acquire two outfits per year on budget, the seventy-year-old matriarch thought.   Mrs. Greyson made appointments every fall and spring with the personal shopper that worked in the women’s department of the store, and for the last few years, the personal shoppers left much to be desired.

The manager of downtown’s JC Penney was a boy named Jerry, a boy who had worked there since he was twenty six, fresh out of college and returning to his hometown.  Analee found comfort and one might even say love in his greeting and readiness to understand her needs.  She was to buy  three complete outfits on the day she came in,  and Jerry always made sure that he told her how much he appreciated her patronage.

The JC Penney was in the center of town, a brick building that used to look like a school until they painted it white.  After the white, it had been painted tan, and then two years ago it was covered in mirrored tiles.  Analee, a woman who knew the value of a penny, thought that the modernization was a waste of money, with one exception: when they replaced the wooden staircase with an escalator.

She loved the escalator.

“Mrs.  Greyson, I’m so glad to see you,” Jerry greeted Analee as she entered the store.  He knew she would be there at 9:30 a.m. sharp and he was waiting for her at the entrance.

“Hello,” Analee smiled,  removing her leather gloves one finger at a time.  “What is this I hear?  Are you really closing?”

“I’m afraid so,” Jerry smiled. “This building will still be owned by JC Penney, but it will be a corporate office, no longer a store.”

“Surely, you’re joking.  You can’t be more that forty.”

“Sixty-five and you’ll retire?” She put her gloves into her Dooney & Bourke bag and straightened her hound’s-tooth jacket.

“Yes, ma’am,” he nodded, smiling.  He joined his hands in front of himself, almost like a schoolboy.

“My husband worked all the way into his eighties…”

“He was a good man,” the manager said, respectfully.

“…and he bounded out of bed each morning like he was born to do it.”

“And he was, you know!” She looked at the light cardboard signs, suspended from the ceiling with fishing wire.  Markings of discounts were everywhere in bright colors, as if the sale were happy news, rather than the sign of a store failing to meet its profit margins.

“Mrs. Greyson,” the manager motioned to the right with an outstretched arm.  “May I escort you to women’s wear?  I’ll introduce you to who will be helping you today.”

Analee followed him through the junior section into the women’s where they found two women behind the counter speaking quietly to one another.  As soon as they saw the manager and the old woman they straightened and nodded.

“Monique,” Jerry now spoke in a stern voice.  “This is Mrs. Greyson, who I told you about.”

“Hi,” A blonde, thin girl looked wide-eyed at Analee, not knowing what to say.

“You’ll be assisting her with spring shopping today.  If you’ll come with me,” he said, firmly.

Monique came from around the stone-look counter and stood next to them.  Analee sized her up as new and sighed.  These new girls that the manager hired didn’t stay long and seldom greeted her properly, she thought.

“Unless you would like Consuela to help you,” the manager offered.  Consuela smiled shyly behind the counter, standing up straight.

“Have you ever assisted before?” Analee asked Monique, a girl who was pale and thin but still managed to show too much cleavage.

“Yes,” Monique left off the ma’am and Analee sighed again.

“She’ll do,” she said, looking back at the manager.  He smiled politely and extended his hand.  Analee shook it, and did not smile.  “I’m sorry about the store closing,” she said.

“Thank you, Mrs. Greyson,” he said, nervously smiling again.  “I’ll leave you two to shop.”  With that, he walked away and Analee watched him.

“How can I help you today?” Monique asked, breaking the strange silence.  Analee turned toward her and remembered it was a young thin girl helping.  Her shoulders dropped with disappointment.

“Where is the spring line that has arrived?” she asked, quietly.

“The what?” Monique’s face crinkled at the words as if she’d never heard them.

“Please show Mrs. Greyson the new suits that came in last week,” Monique said from behind the counter.

Analee recognized the short Mexican woman that Jerry called Consuela.  She had been there almost as long as Jerry, but Analee had never been helped by her.  She seemed to be a simple stocking clerk and not a personal shopper.

Monique walked slowly toward the window display.  For a moment Analee considered asking Consuela to change places with skinny Monique, but then remembered herself and followed the girl to the aisle of new arrivals.

“These came in last week,” Monique said, lifting a sleeve of a spring jacket hanging from a chrome display rack.

“So I heard,” Analee wasn’t impressed.  So far the girl was doing nothing, just like the girl that was supposed to help her last fall.  She lifted the jacket sleeve and examined the cuff stitching.  “Where is this made?” She asked, almost to herself.  As she checked the label, Analee heard Monique’s voice.

Just as Analee expected she saw no union label.  This meant that the work was taken out of the States to another country where labor was cheap.  The stitching would be defective and the jacket could prove to be ill-fitting.

“Hmmm….” Analee considered the design.  The cut of the jacket was one that previously had looked timeless, but she was suspicious of its quality and the store mark-up.

“Can I show you this in your size?”

Analee looked up and answered, “I’m a ten.”

“Are you sure?”  Monique lifted an eyebrow at Analee, the first real sign of attention she gave her.

“You know what, young lady, I’ve had enough of you.  Get me Consuela and I’ll wait here.”

Monique blinked like a doe in headlights, then walked slowly back to the counter.  Analee was fuming inside, insulted by a mere waif about half her body size.  The outfit she was wearing was purchased in this very store just six months ago and looked beautiful  in her reflection in the mirror.    Monique was just a buzzard of a girl who wanted to lose a sale.

“Mrs. Greyson,” Consuela spoke softly and Analee turned to face her.  The Mexican woman stood facing her.  From the distance she stood, Analee could see that Consuela was about as old as Jerry was, perhaps even older.  She looked humble and ready to help.

“Where was this made?” Analee asked her.

“I believe the Phillipines.”

“I only buy American made, you know.”

“Yes, we send American fabric to the Phillipines and it’s assembled there.”

“Is that the best we can do now?” Analee asked, disgusted.  “This country used to make everything for itself.”

“I guess I’ll take this one, but I won’t wear it with the same pride.”

Consuela chose a size twelve from the rack and hung it in the nearest dressing room.

“Last year you preferred the twelve, remember.  Last seasons were all twelves, too.  I believe it is the assembly being outsourced that makes it a tighter fit, Mrs. Greyson.”

“Oh, sure.  You’re not supposed to tell me that my middle is increasing in size, either, are you?”

Consuela laughed.  It startled Analee, but then she laughed, too.

“After all, I’m a paying customer,” the elder woman said, beginning to feel better about shopping.

They worked together well, and Consuela possessed the surreal intimacy needed to understand Analee’s taste and ever-changing body.  It occurred to Analee that Consuela had been the one who was there each time she came to the store.  Consuela was the one who had lined up the outfits that she would be seeing.  Analee realized that she should have asked for Consuela at first, rather than the slow waif with no manners.

At the end of an hour, Consuela was wrapping three spring outfits for Analee in a garment bag that she found in the back room.  Analee appreciated the extra attention to detail she had and as Jerry came around to see how things were going, she said so.

“Consuela has been very helpful,” Analee told him.

“Yes, she loves personal shopping,” Jerry beamed.  “I’m glad you finally decided to give her a try.”

Although she normally paid her bill in the mail, but since the store was closing decided to pay by the ATM they had available at the counter.  As she did it, she thought of the changes in this store over the years.  It used to be a place for the middle class to shop.  The white middle class, that is.  As the nation changed, so did the store.  At first it was the customers that changed; then it was the employees.  Soon, even a position as intimate as personal shopper could be occupied by a person of color.
Just like Consuela.

“Thank you, Mrs. Greyson.  I love all of your choices, especially the powder blue one,” Consuela said, and Analee knew she meant it.  For some reason, the clerk had shown her more respect than most of the personal shoppers she had met here in a long time.

“Yes, that one is easy to love.”  Analee smiled.

The women looked at each other and knew it would be the last time that they would see one another.  After all, this store was closing.

“How do I say thank you, Consuela?”

“You said thank you to me by choosing me as your personal shopper.”  Consuela’s eyes were solid brown, like coffee, as Analee looked into them.

It turned out to be a very good shopping day.

Posted by Brazen Princess at 11:54 PM