May is Short Story Month
This is one of mine.  It's written for an adult audience.
Please don't read if you have a sensitive constitution 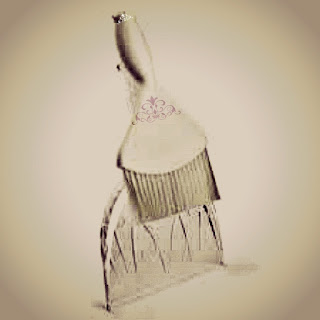 “This is the only broom we use in this space.”

I looked at it.  It was impossible.

“And the place needs to be swept every day, or else she’ll fire you.”

“Can I bring another broom in?” I asked.

“No,” he said, incredulously, looking at me like I was out of my mind. “You have to take off your shoes, put on socks and leave your bag in your car and you want to bring another broom in?”

The ad said references required, which I brought.  I ended up having to take them back down to my car once he had read them, since no “foreign matter” was allowed inside.  He interviewed me and found me acceptable but told me right away that only she was to say if the job I had been hired to do had been done well.

“This is the only broom.”

“Got it.”
“I told you it wouldn’t be easy to hear.”
He left me there in the pristine entryway with glass tables and a white velvet ottoman, handing me the small dust broom and dustpan combination.  They had silver trim in the handles, much like an old Derringer, which I wish I had.

“Begin at the doorway, and work your way into the study,” he said. “Those are the only spaces that need to be swept.”

“Alright,” I said, trying to smile.  His eyes were deep blue and serious, bags all over his face betrayed a lifetime of sleeplessness and worry.

“The broom is replaced once a week,” he said, softly, looking down.  He looked at me suspiciously before walking away, his footsteps echoing.  The ceilings were at least twenty feet.

A cameraman on a crane would have shot me from there, and slowly panned around the converted warehouse to show the insanity of the job before me.  The white walls and the white furniture had brief, awkward interruptions of color in wall hangings, lamps and throw pillows.  I would be sweeping at least 3000 square feet of living space.  It was already so polished; I could see my face shining in every surface.

I took the broom and began to sweep at nothing.  No dust, no dirt, and no nothing in the whole warehouse space, other than the textured white floor that was scored and varnished so heavily it looked like water.

Who had been there yesterday?  He said the place had to be swept every day, and it looked like this?  The pay was incentive to stay, but the insanity choked me.

As I worked, on my hands and knees, I heard the clack-clack-clack of his typewriter in the distance.  When I loked up I saw him, off in a corner, his black socks crumpled around his ankles.  He sat at a small writing desk, a Chippendale (was it a knock-off?), probably the only thing he had brought into the home from his former life.

A dog barked in the distance.

I was doing this to pay the bills.

Living in the city is more expensive than people realize and dreams are luxuries that none of us are entitled to.  There was grad school, then the loans came due.  I worked for awhile at a hotel desk, but the pay was bad and the hours were worse.  I tried to get a job at the magazine where my brother found work, but there was a glut of writers and most of them were snobs or frustrated authors.

He never waited for the bell.  I heard the carriage return lever click, swoop and advance the paper up a line.  Why didn’t he have a computer? What was it, an Underwood?  What was he writing?  He never waited or stopped to think. Was he setting copy?  Re-typing?  Was there no outlet there?  I looked up. There was one at his feet, a lamp was plugged in there.

The bristles were white, the ends were even whiter.  Where would dust go?  I looked in my pan, but only anemic see-through bits were collecting.  Was it worth it?  How long had I been sweeping?  Ten minutes?

I really did love Larry.  He was a fabulous husband and provider but I should have known he was gay.  How could I not see that?  He was so apologetic leaving me and I hugged him for so long, assuring him that it was okay – that he was okay.  He told me that if it weren’t for his lover he would stay married to me because he loved me so much and I wanted to believe him. I wanted him to stay, even if he was gay.   Instead, he left and there was alimony for a few months and then nothing.  Not even a phone call.

I had it all written.  It was a feat of note, getting my novel done while I held down two jobs and was coping with my divorce.  Most of my friends had drinks after work in Italian restaurants with a friendly bar.  Instead of fun and a social life, I went home to a studio with a broken radiator and wrote the whole enchilada on my laptop before it broke.  Thank God I saved my work on a separate drive.

Every agent that read my submission (did they really read it?) said it wasn’t for them but encouraged me to keep looking for representation.  I read each rejection letter the first year and then realized that they all looked alike.  They were all trying to encourage me with rejection.  They were the hug and assurance before saying goodbye.

“Listen carefully….” I smirked, thinking of the writer’s words when I came in.  What was I, twelve years old?

“This won’t be easy for you to hear?”

A lot of things are not easy to hear.

Guess what’s not easy for you to hear?

You... you odd little kept man typing away on an Underwood.

You are mentally ill if you are living with a woman who has see-through furniture and fluffy pink pillows.

When is the last time you slept through the night?

Are you so afraid of being alone that you accept this insanity as normal?

You are a moron to be doing this for some woman who most likely doesn’t appreciate you.

She can’t even enjoy sex, judging from this place.

Posted by Brazen Princess at 9:42 PM