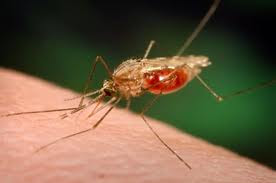 My story begins with a mosquito. Its middle is a contrast of medical care. Its end is a surprise- a painful one.

When we first came here, our medical insurance back home (of course) didn't cover us here. We decided to "take our chances" of not needing to buy "medical aid" (health insurance) here, and pay cash if there was a need for the doctor.

This is our first experience with a South African "private" hospital in 2007.

Mario, my dear husband, and I were on a trip to Malawi, a country that is four countries north of South Africa. We camped, in tents, in "the bush" with our team, having basic camping necessities, but no real luxuries

Since our team knew full well of the need for Malaria meds (they're called prophylactics, no kidding) we all took the same stuff. A safe dose meant you were 50% less likely to contract the disease if you were bitten by a malaria mosquito.

One morning, Mario was bitten by one.

By the time we got home, Mario was running a fever and feeling "a little off", so we visited the local hospital's emergency room. We paid cash, and were seen by a doctor who knew the drill.

He took blood and cultures and sent them to the lab. He told MArio to go home and get in bed. The results were back the next day.

Mario had Malaria, and it had to be treated by hospitalization.

"No hospital, please!" Mario said. "We don't have medical aid."

"You have no choice," the doctor said. "I would need you to be cared for around the clock and have the right amount of medicine and fluids given to you."

"My wife can do it," he said. This was a promise that I was "keen to keep" and ready to do.

"Alright," the doctor said. "If your fever goes up too quickly, you have to go in to the hospital."

He let Mario go home, on the promise that he would go straight to bed. He gave him quinine, the first-world answer to malaria, and told me to call if things "got bad".

Mario's fever spiked, and we found out that he was allergic to the medicine that would make him well. He went deaf (temporarily) and had night sweats and dizziness. We appealed to the doctor, who said to "stay on the course" and suggested that I get tested and my daughter. The same blood tests were done on us. We were both negative.

The week with malaria was a precarious one. By the time Mario was feeling better he had lost 14 pounds.

Still, we were thankful that the hospital was not needed.

By the time the bills came, we had a stack - emergency room bill, docotr bills, blood tests, smear tests and cultures. All totalling about 200 USD's. We were flabbergasted.

The surprise was not only the effective care, hospital visit, medicine and docotr visits for such a low cost; it was the awareness that most people in Africa couldn't afford it.

According to the Center for Disease Control:

35 countries (30 in sub-Saharan Africa and 5 in Asia) account for 98% of global malaria deaths.

89% of the malaria deaths worldwide occur in Africa.

Malaria is the 5th cause of death from infectious diseases worldwide (after respiratory infections, HIV/AIDS, diarrheal diseases, and tuberculosis) in low-income countries.

Malaria is the 2nd leading cause of death from infectious diseases in Africa, after HIV/AIDS.

While we became aware of our "bargain" medical care, we also became aware of how widespread the disease was all over Africa. What we considered a "good deal", in fact a huge blessing, was unaffordable to most, who would die from the disease.

April 25 is World Malaria Day. By Arpil 25, approximately 80 thousand deaths will occur in Africa from Malaria. November is Malaria Awareness Month, but only in countries that have an awareness of the disease.

Here is the surprise: Malaria could have killed Mario. His quick diagnosis was the best tool he had to getting better. If he had been treated in Malawi, where the disease is rampant, he might have had a quicker recovery, since their meds are more targeted at "local Malaria", and they rarely use quinine. Treatment there would have cost us about fifty USD's.
Posted by Brazen Princess at 12:01 PM