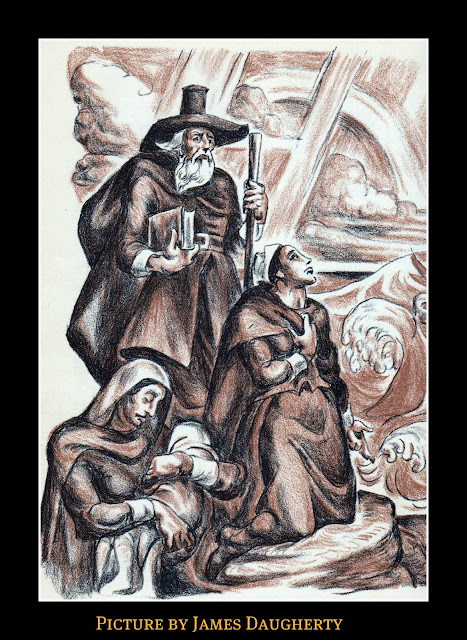 A group of literate farmers forced out of their country chose the Dutch before the American Dream.  They sailed away in an overpriced charter: a leaky boat laden with curses.   Half of them died their first year and it looked like the rest would suffer the same fate.  It wasn't until two Native American men who had no reason to trust the white man in their own land,  saved their lives.  They celebrated the first successful harvest with wine, eels and stewed plums.
Thanksgiving is among the MOST misunderstood of the holidays.  In knowing documented truths, we are able to see beauty among the traditions that have grown their own appendages and heads.
On all accounts, the first Thanksgiving happened in Plymouth Plantation, or near about...a three-day celebration that defies our concept of the history.  Compare what you've learned to the most reliable information I've collected over the years: served up to Elementary kids as a feast of knowledge.
“Pilgrim” means “seeker of Religious Freedom” and America wasn’t their first choice for Utopia.
In the winter of 1607 a band of people , literate farmers,  refused to be intimidated  by  the King of England, James I.  Since they knew the Bible, they saw the abusive powers of the church and decided to separate from the Church of England.
They called themselves Separatists, and faced criminal prosecution if King James, found out.  Since he had forbidden any other churches to form or to worship British soil, these separatists  fled to Holland (Leyden) and set up a colony of just themselves where they could worship God in freedom.
There were hardships: They were in a sea port city of Leyden had only jobs for the business owners or traders.  They were simple farmers.  Their children – who before were only influenced by the English society, were greatly seduced by the Dutch freedoms and language, and in their parents’ eyes, fell vulnerable to the “things of the world, above the things of heaven”.
They soon decided to travel to distant America (remember, still a British colony) and farm there, in a secure, safe and utopic society to belong only to them.
THE MAYFLOWER wasn’t the only ship – but the other one leaked.
In 1620 the first group of the separatists left Leyden for London to sail off (hopefully) for the New World in America.  They chartered two boats: the grand Speedwell and a smaller Mayflower to hold 120 passengers.  The Speedwell, however was a little to “heavily masted” as early journals say, and it had to be abandoned because it had a leak.  They took the smaller Mayflower, and took 102 passengers, setting sail on September 16, 1620.
Halfway on the journey, The Mayflower herself began to leak, and the leaders made a  decision to sail toward America rather than turn around.
While on board, the leaders of the Separatists began to draft a constitution of sorts, a one-page document that our founding fathers used as a model for the Constitution.  It was called The Mayflower Compact.
After 65 days of sailing, the highlands of Cape Cod were spotted by a crew member, and the Pilgrims gave thanks to God for allowing them to see the New World.   Quite a few of them were sick with scurvy.
Plymouth Rock isn’t where the Pilgrims landed.
The famous rock we all were taught the Pilgrims valiantly stepped upon and entered the new world isn’t even mentioned in the early journals of the Pilgrims, in the Mayflower Compact or in the historical “Mourt’s Relation”, the most reliable source of the journey and early years.
In fact, the Pilgrims first “landed” the ship (set anchor) at modern day Provincetown on November 21, 1620.  When they set anchor, a ceremonial reading of the Mayflower Compact was read and nearly everyone signed it.  Even women.
Years later (as in 1741) a town records keeper in Plymouth loudly opposed a dock being built on the site near Plymouth plantation (which the Pilgrims eventually sailed into).  He pointed out a block of marble that his father had sworn was the very spot that the Pilgrims landed.  This “Plymouth Rock” was homage as a landmark and a National Park now is there.
Pretty, but not truth.
The first home of the Pilgrim was The Mayflower.
While the men built up the plantation they dreamed about, they had to keep returning to the Mayflower to sleep.  The weather was cold and the work was exhausting.  Every tree that built up the homes has to be chopped down – and a common house to store supplies had to be erected before any private home was finished.
By mid-January the common-house was completed, and the little village began to take shape. The "Great Sickness" raged through the winter months. Half of the colonists would soon be dead. Even the crew of the Mayflower was not spared. Nearly half of her crew would not survive to make the return trip to England in the spring.
The only hope was the native people, who had every reason to be suspicious of strangers.  In years previous, they had brought guns, the plague and food only for themselves.  They had also kidnapped some of them and taken them back to England.
Still, a few who had returned to their people knew how to make “the white words” and offered to see if the new, desparate strangers may need help.  In their journals, the pilgrims all say that they were near death and without hope until a man named Samoset came.
Samoset and Squanto were  keys to the Pilgrims surviving their first winter.
When the Pilgrims met them in 1620, the Wampanoag (“the People” in Algonquin)  were competent farmers, fishers, hunters and gatherers.  Even so, they had no plans of befriending the whites.  Too much of the death that they had recently suffered was at the hands of white men.


A man named Samoset (who was not chief, but rather a returning slave who spoke English) walked boldly into the plantation crying out, "Welcome! Welcome, Englishmen!"

Email ThisBlogThis!Share to TwitterShare to FacebookShare to Pinterest
Labels: The True Story of Thanksgiving