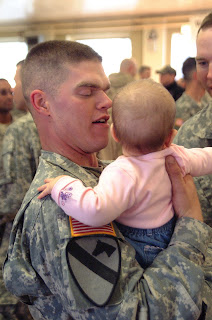 
My name is Janet.  You don't know me, but I wanted to write to thank you for all you've done in serving our country.


I just read from my internet newspaper that a great many of you are being scheduled to come home, and your return date is imminent.  This announcement made me think of the times we prepare to return to the same home for vacations or holidays.  The thrill of seeing family and the thoughts of seeing their faces keeps me up at night in anticipation shortly before I go back.  Once back, I love the relaxed conversations that take place between our loved ones, shooting the breeze for hours, as if we're making up for lost time.


My husband and I are in South Africa, here to serve God in any way we can, part of a large international team that helps local church leaders learn how to lead.  The country I now live in is wonderful, full of hospitality and great people, but the freedom and rights I grew up with are very foreign here.


When I go home, after a brief honeymoon period, I am ushered back into the fast-paced society that America has become. It's surprising to me to see how much people in the USA seem to take for granted.  Free speech, our right to a speedy and fair trial of our peers, our right to bear arms and protect ourselves, our right to vote... all of these are uncommon luxuries in the world.  The people back home seem more consumed with Twitter and Facebook... but that's a different story.


The world  I re-enter is one I am hoping will be different from your perspective.  The reason why?  What will happen when you go back is something our team calls re-entry shock.  I can only imagine what it will be like for you...


You have gone selflessly and served in a place whose business, traditions, climate and food are so unlike our own.  You've seen a country which does not know or understand the unique freedoms we share in the USA.   I've read that many of you who are returning home are young.  Many of you have done tours in a place that marks your first time out of the country, and even though our situations and experiences for being gone are different, I have a feeling you may benefit from what we've learned.  I'll call this "My Unsolicited Re-entry Advice".  It's my hope that it will help you.
1. Don't  try to justify what you have done in five-minute conversations.


As for your family, your spouse or your children, they really want to know how you are, and what parts of your tour have troubled you or excited you.  Most others will want the five-minute version of what you have been doing with the last few years of your life.


Without knowing the damage they can do, some may accuse you of not being at peace for the most sacrificial years of your life because you don't have the rehearsed answer that could justify you being removed from all they hold dear.  They may try to bring in opinions of what they have heard from their "spin media" in a wide array of subjects:  Bin Laden, Afghanistan, desert camo, The Hurt Locker, etc.  Just smile and wave... these folks are the ones that have never left the country (and maybe not even their couch) in the last few years.  Try to have patience for them, even if they're screaming at the Starbucks person for more foam on their cappuccino.  These are the people you fought for, too.

2.  Be at peace with who you are, even if the country has mixed opinions.


Unless you've been a soldier, you can never understand a soldier's heart.  A soldier follows orders and does what warriors do.  You signed up; you were not drafted.  You did not have to do this for the USA; you did.  You risked your life, which  makes you a hero.  Know that most Americans would thank you, send you appreciation for  your loyalty and dedication.   Most have a deep respect you and your family; for the sacrifice you have made for the United States of America.
Even so, a soldier doesn't stop being human, and the deepest feelings of missing family when you are removed by miles (kilometers), oceans and time zones can't be translated.  These are the deep places in your heart that many can only dimly guess at....  God knows.    At the end of the day, you were a soldier, and that role - even though it was fulfilled dutifully – is not your identity.  The many facets of who you are may never be known to others, so be at peace that God sees you for who you are down deep.

3.  Don't listen to "experts", like Michael Moore, who with all due respect, is an idiot.


In old time villages, everyone knew who the idiot was.  They were entertaining, easy to listen to, good for a laugh or two, but not many people relied on their opinion.  Now, put a camera in their hands and a good editing team, and presto!! The world listens.  Most Americans know the truth.  Last week Moore was quoted as saying about bin Laden's execution:

"The Nazis killed tens of MILLIONS. They got a trial. Why? Because we're not like them. We're Americans. We roll different."

Since he was last seen, Moore wasn't supervising International policy or sitting in on UN conventions or negotiating hostage release anywhere in the world.  The place he spews knowledge from is not even as a historian.  An historian would accurately say that Nazi's (while agreeably the most hideous threat and propaganda-programmed army of yesteryear)   openly declared war, openly fought and openly joined forces to fight a world war.


The difference between the leader of Al Queda and Hitler is that Hitler wasn't a mole, hiding and secretly planning terrorist attacks against countries not at war.  Even Hirohito is seen as nobler, attacking Pearl Harbor on a Sunday Morning while many were in churches instead of at the base... bin Laden was executed like the roach he was – killed before he could scurry away.  The Navy's justice to him and his family was a proper Muslim burial at sea.


While Moore has been stirring the pot and eating Cheetos in his air-conditioned studio at home, you've been guarding our fence at night.


It is for this reason, that you have more credibility in my eyes.
4. Have patience for others who haven't seen what you've seen.


In the end, all people have a perspective that is their own.  All people want to be liked, maybe even understood.    You may be tempted to "school" some half-informed people.  You may be in the middle of a conversation with another school parent, or maybe even an old friend, and it will occur to you that their opinions sound a lot like conservative radio or NPR, or MSN... and they believe what they are saying is true.  On these occasions, it may cross your mind to educate them about the reality of the Middle East, or the oppressed lives of people you've seen up close-up.   In the first world, most people have only seen "resort-third-world", or the poverty that is near their destination wedding.  What people have seen on the news or during a two-day visit is very different to living alongside of a people in circumstances, traditions and governments so unlike our own.   The quickest way to cast your pearls before swine is to make sure they never believe their news source has the full story, or to quote it as their own opinion again.
5.  Take time to re-enter.


Read other's stories of getting back to the USA.  Write your own for your children and their children.  Check out blog sites and start your own.  Personal stories are the quickest ways into peoples' hearts.  It may set you free, in some ways, to see your own thoughts in print.  Why do you think I do this?
Go to Baskin Robbins and ask the kid behind the counter what his favorite flavor is, and then order it.  Get a big, greasy hamburger with pickles and ketchup and finish it.  Go to the newest park in the neighborhood and watch a little-league game.  Visit a nursing home and ask someone to tell you their story.  Visit Home depot and take a class on how to build a greenhouse, even if you live in an apartment.  Volunteer at a food closet.  Go to a local art gallery and really take time to look at the exhibit.  Go to a midnight showing of a movie, and eat popcorn.
This is your home.  This is what you came back to.  Everyone else will look like they haven't grown or changed or moved an inch, but they have.
Have hope, patience and love for the next generation.
Remember you are loved, and getting through the re-entry will take time.
And go to church, soldier.  God has gotten you through this.
Blessings and Love,
Janet
Posted by Brazen Princess at 3:43 AM