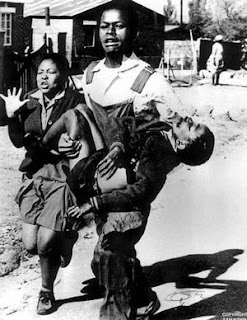 South Africa has so many National Holidays!!  Some are so closely cropped together that most citizens are annoyed  by their interruptions of the work week, rather than blessed for their days off. Today , June 16 is called “Youth Day” – perhaps a little ambiguously named.

It's really not about youth, and it's not a day of celebration.  In reality, Youth Day is named after an uprising that took place in Soweto (SOuth WEst TOwnship) Johannesburg. It's memory is emblazened into most of our heads because of one picture: a little boy, a crying sister and a young man carrying him away, limp in his arms.
It  began on this day in 1976 with a peaceful protest by high school students, objecting to a recent government edict that all instruction in black schools would be held in Afrikaans.  Most black languages in South Africa that are readily spoken belong to a Bantu stream (Zulu, Xhosa,  Sotho, Tswana)  Afrikaans was not just a language: it was the langiage of the Apartheid Government, who (by their own admission) saw it as a higher, preferred tongue.  Because the Apartheid era had made the separation of schools (white schools were much better funded than black schools) and the separation of classes (Blacks had to be in the township by nightfall) and the oppression of the black people in general (marriages, friendships and freedoms were all subject to the Apartheid government's permission), the few benefits of the black schools were that the lessons given to the students could be instructed in their own language.  The protest, the students decided, was to remain peaceful, and show the government that their language was a cherished right that would not be surrendered for an obscure ruling in Pretoria, made by people who had most likely never set foot in a township.
The protest attracted a large crowd of non-students who agreed (and were equally angered by the ruling).  The crowd of approximately 10,000 soon became loud and aggressive when the police arrived.   A riot  started, with angry Sowetans killing two school board members, killing, then burning dogs, vehicles and buildings associated with the police and the governing school board.
A group of 30 black members of the police force gathered outside the Phefeni Junior Secondary, and began singing the traditional Sotho anthem 'Morena Boloka Sechaba Sa Heso' ("Lord, Bless Our Nation" in Sotho), quickly sending the message that in the township, the Police were here for black people as well.  This led to   the crowd became violent, throwing rocks at the white police, there to keep peace for the people. As a result, the next step in police trainging kicked in: a rioting crowd gets teargas fired into it.  It is unsure what happened next, or what sparked the next level of force.  The official explanation was this: "Before the crowd could be dispersed, we opened fire on the demonstrators".
There are conflicting accounts of who gave the first command to shoot, but it resulted in the same thing: people turning and running in all directions, leaving some children, who had originally started the protest, lying wounded on the road.
The boy's name was Hector.  An Hispanic name in a Bantu Township.  Hector Pieterson.  His last name was Afrikaans.  He was hit by a stray bullet, and mortally wounded.  He fell on the corner of Moema and Vilakazi Streets, was picked up by Mbuyisa Makhubo (an 18-year-old schoolboy) who together with Hector's sister, Antoinette (then 17 years old), ran towards Sam Nzima's car. They put him in, most likely already dead, and a journalist by the name of Sophie Tema drove him to a nearby clinic where he was pronounced dead.
Hector is the image of Youth Day.  He even was given his own museum, as a memorial to the "struggle" and the fall of Apartheid.  He was widely revered as the first child to die that fateful day, but it was another boy, Hastings Ndlovu, who was actually the first child to be shot. In the case of Hastings, however, there were no photographs, no dramatic rescues, no clinic pronouncement.   His name was not immediately known, and when they located his family, they confirmed that their son, Hastings, was the body that lay before them.
More than 500 hundred people died in the uprising. Among them was Dr. Melville Edelstein, who had devoted his life to social welfare among blacks. He was either beaten or stoned to death by the mob and left with a sign around his neck  'Beware Afrikaaners'.  Edelstein (not Afrikaans) loved Soweto and its people...but on the day he was a man with white skin inside of an angry mob.
It is the picture of Hector Pieterson, the one black schoolchild shot by the police, that brought home to many people within and outside South Africa the brutalities of the Apartheid regime. The event sparked the curiosity of a world that couldn't imagine the riot, the edict, the outcome of the day.  With this picture, the words "Apartheid" and "Amandla" became known where I was growing up...and made the UN cause sanctions to be imposed later, after a National decision not to heed warning to remove an oppressive government.
We have MANY Afrikaans friends who hated the idea of Apartheid.  We have MANY black friends who confess that not all of Apartheid was so bad.  The truth of it remains that the system was destined to fail, as all systems that hijack rights away from citizens do. It is so like our own civil rights struggle in the 1950's that we understand the idea of a Nation moving on and remembering not to repeat the mistakes of the past.
In the end, the revolt was about a final straw: language.  When South Africans remember Youth Day most likely they remember the boy in the picture: the revolt against the police.  The civil tension and mutual racism is lost in the history that is now taught: it was all about a corrupt government shooting at students.  The truth?  A township refused to be given one more rule; have one more piece of their identity stolen away.  The riot led to police and a show of force that was brutal and the undoing of them.

The issue of language is a deep one - it makes us who we are and gives us a freedom to express who we will want to be.  Nelson Mandela once said "When you speak someone's language, you speak to their heart."

It is true.
Dit is waar.
Yquiniso.
Posted by Brazen Princess at 3:13 AM