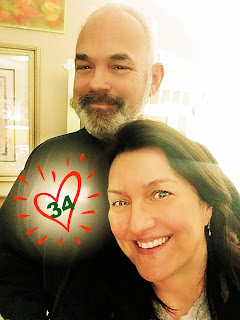 I’ve been given a gift.

Every day, for the last thirty-four years, I’ve been given a tree-like blessing, which changes and grows, in season. Like a tree, it produces more than it consumes. It’s lovely. It’s something I don’t deserve, but it’s mine. Every day.

My tree makes its home in the earth, where the roots go down. It holds on to something greater than itself. It stretches itself upwards, and actually believes it is part of the unreachable sky on good days.

Everywhere, everywhere, are threats to its happiness, but the tree grows stronger each day it stands.

My gift, my tree, has survived wood-boring insects, periods of drought, and mighty winds that could have easily toppled it. It’s been threatened by fire, stripped of its bark, and had words of death spoken about it, in front of it, and to it, by well-meaning friends who are “just trying to be honest.” They have accused me of destroying it. Sometimes they’ve been right. Sometimes, after they leave, I lean against it and cry.

This is an organic gift, a living world, a microcosm of the complicated world around it. It’s in my care, a responsibility I don’t take lightly. Today, it celebrates a lifespan of thirty-four years.

I’m not a great gardener. In fact, there are days I’m a terrible one, but the tree is a treasure , and I know I'm entrusted with its care. I believe it lives beyond me, so I don’t treat it like my servant; I treat it like a living thing, in need of me.

I grew up watching a tree like this one grow, in front of me. I have a clear advantage in tending this one just because I know it can be done, it can work, it can survive, against the odds.

I believe it can live, and it deserves to live. I believe in its might.

Thank you, and Happy Anniversary,

to my beautiful Mario, who I don’t deserve...

For the tree-like blessing of marriage these 34 years

Posted by Brazen Princess at 5:14 AM