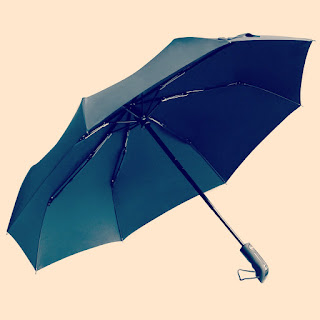 Two guys followed Chris for sure, but he thought there might be more, so he quickened his pace.  He reached into the long pockets of his overcoat, feeling around for his knife, but he remembered that he had left it on his desk, so that his mom would not discover it in her new routine of checking his pockets.  Instead of the knife, he felt the stumpy, fold-up umbrella that his Abuela had given him for his birthday.  It was designed for a ninety-year-old, with an automatic-open feature and a slip-proof handle, but Chris knew he could use it as a weapon if he had to.
He passed the pretzel shop, the cookie kiosk, the Music-Stop (blaring Taylor Swift); he ignored the aproned girl trying to hand him a flier at the American Girl store.  The mall’s automatic doors were within sight, but he could hear the clicking of anxious footsteps behind him, as if his followers were running.  He turned to face them.
He saw them—Eddie and his crew.  They had tried to corner him in the bathroom that same day at school, after they discovered he was using the bathroom stall to urinate.  His heart thumped heavily in his chest –then and now.
“Hey, Chris!” Eddie Young hollered.  “Wait up!”  Eddie wanted to appear friendly –maybe for the security tape—but his face was scarred with hatred and his crew had identical, hungry expressions.  Chris knew they wanted to force him into a dark corner outside and rearrange his face.  Their task had been curtailed earlier and they seemed driven to finish what they started.
Chris stopped, scanning the halls for any security or person of authority.  Only the aproned girl handing out fliers was there, but she just stared at the scene as if she were watching a movie.  He withdrew the umbrella from his pocket and held it high above his head with his right hand.   “Stay right there,” Chris said, his voice sounding high and nervous. “Just….”
“Just what…?” Devon shrieked with laughter.  His cronies burst out laughing too.  “Just let me be a girl-boy or I’ll hit you with my umbrella?”
Chris started to sway in panic, and then suddenly—without warning—the umbrella opened.

+++
The trip to the mall was Mom’s idea, after she heard about the bathroom scene.  Chris hated telling her, especially since the year had been riddled with uncertainty.  The return to school had been a risk, after the haircut, the wardrobe change, the decision live his life as a male.  Even with the most supportive family, Chris knew that real acceptance would have to come from his peers—the ones with the true power to accept or reject him.
“Did you tell a teacher?” Mom asked him.
“No.”
“Why not?  Do you just want them to get away with it?”
Chris didn’t say anything.  He was trying to keep the real horror to himself.  He was ashamed of his peculiar dilemma—and the words the boys used that afternoon:
“Why not come out here?” one of them yelled.  “Whip it out in front of the rest of us!”
“Yeah, we’re all guys, aren’t we?”
There was laughter and pounding on the door as Chris yelled for them to leave.  Eddie hoisted himself up on the metal swinging door, peering over at Chris as he sat down.
“I see her bush!” he yelled.
“Chris?” Mom’s voice broke him out of his trance.  “Answer me.  Do you want them to get away with it?”
“No.”
“That’s what I thought!  I’m calling the principal right now,” Mom picked up her phone.  “I’m not going to stand back and watch my…”  Chris reached for her hand.
“Mom, please don’t,” he sighed.  “There’s only so much she can do.”  Mom was seething, but she looked at  Chris carefully.  His close-cropped hair had been dyed blue and green.  His face, just the same as his father’s was worried, but resigned to such terrible treatment.  She put her hand on his shoulder.
“Want to go get some ice cream at the mall?”
Chris nodded.  “Okay, that sounds good.”
The trip to the mall was longer than what Chris felt like.  His music wasn’t connecting to the stereo.  By the time they arrived, it was pouring down rain.
“Would you mind if I just walked around by myself?” Chris asked, almost apologetically.  “I think I just need some air.  He waited for her reaction as she pulled her hands from the steering wheel.  She turned to him, dejected.
“Are you serious?” she asked.  “I thought we were going to have ice cream.  It’s why we came all the way here.”
“I think I need to just be alone.  And I don’t have my license.  Maybe you can wait a few minutes and then come in…”
“Oh, just go!” Mom said, reaching behind her and pulling his overcoat into the front seat.  With ninja speed, she checked the pockets for questionable items.  She handed it to him and he put it on.
“Sorry, Mom,” he said as he climbed out of the van.  Mom hollered something as he shut the door. He walked slowly to the mall, even though he was getting drenched in the rain.  It was refreshing and cleansing in a way.
+++

As soon as the umbrella opened, Chris jumped.  From the inside, transparent balls, like bubbles, fell to the ground slowly.  Time stood still as Chris watched the bubbles, which slowly took shape into figures.  The bubbles elongated into translucent bodies that stretched and grew arms and legs.  The bodies became human—bipedal—and their translucent surfaces became flesh.  Seven people now stood next to Chris.  As suddenly as it happened, time became real again and Chris dropped the umbrella.
The figures of the umbrella crew were varied in height and size.  Two tall black men, dressed in the wrappings of Maasai warriors, carried clubs and stood, stoically, next to Chris.  Two other men, dressed in tartan kilts, ran out the mall doors with great speed.  Three young girls, holding lambs, knelt at his feet.  A man who looked like their father put his hand on Chris’ shoulder and then turned for the door.  At Chris’ elbow, a small man dressed in a long robe stepped forward and picked up the umbrella, which was spinning like a top on the polished marble floor.
“What the…?” Eddie whispered.  The rest of his crew stood still, as if frozen or in shock.
The little man lifted his hand to Eddie and spoke.  “You have no business with this one! Leave him be and move along.”
Eddie appeared to be unable to move.  His face looked boyish now, as if he were twelve or eleven, rather than sixteen.  The other boys gawked at the figures, as if a Marvel comic had exploded with superheroes and they were there to watch.
“I said, be on your way, you lazy Cretans!” the small man yelled at them.  This seemed to wake the boys out of their trance.  Without a word, the crew turned and walked away, like wounded children that had been denied a privilege.
Chris watched them, and then turned to the small man, who struggled with the umbrella.  Chris took it from him and folded it back up. As he snapped the band in place, the two Maasai warriors looked curiously at the folded umbrella.
“They will not bother you again, not with this magic.”
Chris shrugged and smiled, “I doubt it.”
He felt the hand of the tall man on his shoulder, but when he looked up, a strong light blinded him.  He heard a gentle voice whisper: “Your mother is probably worried about you.”
Chris nodded, and turned to walk toward the doors again.  As they opened,  he turned back toward the ramshackle crew, but the only one in the hallway was the aproned girl who had been watching him.  Her eyes were wide; her fliers were scattered about her feet.
As he walked into the rain, he opened the umbrella again.  Rain pelted hard against it, but Chris stayed dry underneath.  For a moment, he forgot where his mom had parked the van.  When he found it, he saw her figure: reading a book by the overhead light.  She looked peaceful and rested.  Chris was suddenly overcome by emotion.
As he opened the car, he smiled at her.
“Want to come with me to get ice cream?”
Mom looked at him carefully, as he held the umbrella high above the door.  She closed her book and nodded.
“I’ll come if you promise to share that umbrella,” she said.  “It’s really coming down hard.”
“You’re telling me.”


They greeted the wide-eyed, aproned American Girl employee as they walked past her, wondering if it was too late to catch a movie.
Posted by Brazen Princess at 1:05 AM

Email ThisBlogThis!Share to TwitterShare to FacebookShare to Pinterest
Labels: Callen! We love you!, Happy Birthday