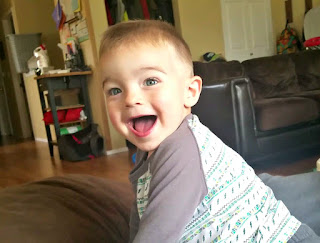 When someone says his name, “Harvey,” the first thing I think of is his smile.

Harvey’s smile tells the world that he is going to be alright.  Only one person I have ever known has had that same smile—his father, Joe.

Harvey’s story begins with the Seattle breeze in unexpected calm.  He was born one day after his parents, Joe and Ariel were married.  A home birth, Ariel was surrounded by a team of midwives attending to her, including Joe’s sister, Seantel.

“She’s close, but it’s hard to say how long this will take,” Seantel told us, as soon as Mario and I arrived. “Can you go get snacks?”

Seantel explained that the midwives had been working all day without food and would be hungry after the task of delivering a baby was over.  As we would fawn and coo over the new life, the midwives would chart and be administrative at the kitchen table—surrounded by healthful snacky foods.

Mario and I headed to Safeway, holding each other’s hands tightly in nervous anticipation.  We bought drinks, cheese trays, chips, and dip.  When we were driving back to the apartment, we talked about the challenge of another long-distance grandchild.  At least I did.

“Seattle is a long way,” I told him.  “I wish they could be in California.”

“It’s not so bad,” Mario said.  “It’s a heck of a lot closer than Africa.  At least we’ll see him more than we would have if we still lived there.”  Mario is an optimist—or a realist.  Both mindsets have a way of being fine in the moment.

We got to the apartment in time for Ariel’s transition.  We met Cathy in the living room and silently prayed for the upcoming delivery.  I was in awe of the smooth, careful breathing I heard coming from the next room.  The Midwives’ voices were louder than Ariel’s soft cries that would bring Harvey into the world.  Ariel sounded nothing like I did in labor; her cries were gentle remarks about the inconvenience of pain.

Eventually, the sounds of a baby coming into the world came.  I stood in the doorway with the audio of my phone turned on.  Eventually, I heard the sounds of a baby, a soft cry that became a loud one.  Harvey was here!!  I held the phone up, with tears in my eyes.  No one, no matter how gifted with words, can prepare you for the incredible brilliance of a new life coming into the world.

We left two days later, after holding Harvey and sharing him with his family who wanted him all to themselves.

We saw him the following Christmas, already playful and engaging to those around him.

It wasn’t until this year when we really got to know him.  We visited earlier this year and spent real time with the boys –and Joe and Ariel.  Visiting with them was heavenly, getting to do the normal grand-parenting things we can easily take for granted. 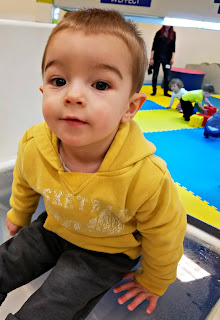 We got to play Legos with Harvey, chase him around an indoor play area, eat with him, sing with him…and hold him close.  He has a beautiful combination of innocence and mischief in his spirit, so like his father that I broke out laughing sometimes.

My favorite picture of Harvey is one where he is sitting at his Lego table, looking over his shoulder at me.  His mother, Ariel, looks on smiling.  In the corner (and this is what is easy to miss) is a red Lego.  Oh, yeah…he threw it! It makes me laugh to remember this…laugh and cry at the same time.

Today marks TWO years since he was born.  Happy Birthday, Harvey.  You remind me of your father—but you are your own man.  Don’t ever wipe that smile off your face!! We love you more than you could ever know.

Grandpa and Abuela
Posted by Brazen Princess at 2:08 AM