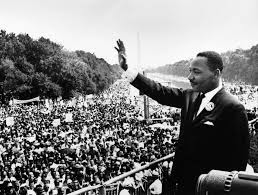 Martin Luther King is an exception.  He is an American hero that wanted to be known.  He had the most incredible family roots and beliefs that he communicated powerfully through the written and spoken word.  While he was known for his letters and speeches, there is still enough about him that remains a mystery.

Today, I celebrate his birthday by re-publishing this blog.  These are surprising bits of trivia about Martin Luther King that I hope you enjoy:

1.  Martin Luther King was not his real name.

2.  He came a powerful and spiritual family.

His father and mother were both ordained Reverends and respected leaders in the Atlanta community.  They shared a home with his maternal grandparents, the Reverend and Mrs.  A.D. Williams.

While the Kings were known for their virtue, they were also seen as radicals, embracing equality not only among the races, but among the sexes.  The King men were staunch believers in the power of Jesus Christ and the Bible and believed in living according to the word of God, which teaches nothing less.  They led Ebenezer Baptist Church in Atlanta, right down the street from their home.

3.  His call to stand up for the civil rights of a nation started in childhood.

As a black child, Martin Jr. was introduced to the world his own black parents had to live in – a world that was racially segregated.  It really didn’t matter that his parents were educated; the American south had enforced laws about the separation of blacks and whites.

Etched clearly in King’s memory was  a family trip to buy new shoes.  Little Martin was excited at the prospect, only to enter the store and be immediately ushered to the back exit.

“No coloreds.” The store owner said to them, angrily.

Martin learned on that day that blacks were not allowed in most restaurants, on public beaches or swimming pools.  They couldn’t drink from the same water fountains as white people and couldn’t use the same toilets.

While these experiences were commonplace for all blacks in the south, it started a fire in Martin's heart.  This event began to shape King's passionate crusade for righteousness.

MLK skipped both 9th and 12th grades (some historians have him skipping the 11th), and enrolled in Morehouse College, a prestigious private, all-male, black university in Atlanta. He graduated with a Bachelors degree in sociology at age 19. 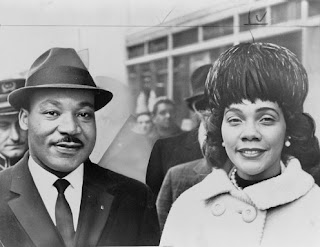 5.  He thought his wife was brave for taking him on.

After Morehouse, King completed seminary and was introduced to Coretta Scott, a woman whose wit and vigor was an incredible match for his.

As much as Martin is celebrated, Corrie (what he called her) was as well.  A brilliant thinker, gorgeous in physical appearance and social graces, Coretta was also known for her voice: a mezzo-soprano.  Her voice, Martin said later, was angelic and worshipful.

On the night they wed, the newlyweds were denied entrance to their hotel (supposedly booked knowing it was a whites-only place).  The couple decided to spend their wedding night at a Black-owned funeral home.  It was only the beginning of many stands for justice they took together.

6.  He’s called “Dr. Martin Luther King” because he was a PhD.  This title was not honorary.

After marriage, King became pastor of the Dexter Avenue Baptist Church in Montgomery, Alabama, when he was twenty-five years old.  He then began doctoral studies in systematic theology at Boston University and received his Ph. D  in 1955.

He was just getting started. 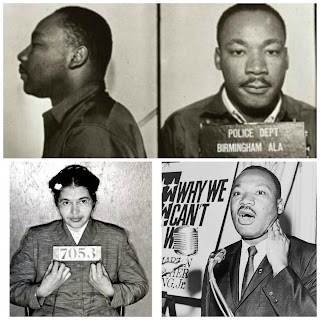 7.  Rosa sat down and Martin stood up - in that order.

On a December,1955 evening in Montgomery, Rosa Parks rode the bus home seated in the fifth row, which was permissible.  It was, after all, the first row of the "colored section".

It was standard practice that when the bus became full, the seats nearer the front were given to white passengers.  This happened and the bus driver asked Parks and three other African-Americans seated nearby to move: “Move y'all, I want those two seats!"

Three riders complied, but Parks did not.

The bus driver threatened to have her arrested, and Ms. Parks said he had every freedom to do that.  She wasn’t breaking any written law; she was just uppity and he called her bluff.

Upon hearing of the arrest, King and his colleague (Ralph Abernathy) organized a city-wide boycott intended to cripple the financial legs of the bus companies.  A staunch devotee of nonviolence, the men were adamant that no one should lose their cool.

On Monday, December 5, 1955 the boycott went into effect – it was the beginning of organized non-violent protests across the south.  Martin was at the forefront of a revolution.

8.  He was a man determined to be seen and heard.

From 1957 until his death in 1968, King gave over 2,500 speeches; he traveled more than 6 million miles; and  he wrote five books and countless articles published in newspapers and magazines.
Upon seeing him deliver his “I Have a Dream” speech, John F. Kennedy, amazed and open-mouthed, turned to his chief of staff and said, “Damn, he’s good!”

My favorite writing of his (besides the PERFECT “I have a Dream” speech) is the letter he wrote from an Alabama jail to the surrounding clergymen.  This portion resonates the most in my soul:

9.  MLK set his face towards Jerusalem.

Martin had two heroes:  Jesus Christ and Martin Luther.  Both men were killed in the middle of their ministry, for their beliefs.   Martin seemed to recognize the same would be true for him.

After many, many death threats and his own people warning him to “go underground for awhile” Martin eventually made peace with the destiny he had – to die for the cause worth dying for.  On April 3, 1968 (the day before he was assassinated), he preached at the at Mason Temple in Memphis, Tennessee: 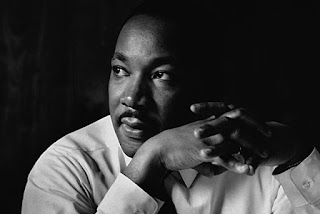 King was assassinated in Memphis when he was 39, after two other attempts on his life.  The details of the assassination are sketchy, but it alleged to be a conspiracy.

At the hospital, one of the attending doctors noted during his autopsy that King “had the heart of a 60-year-old."  A heart that was tired; overworked and stressed – beating in the man that championed respect and nonviolence.

A special thanks to The King Center for their online history of MLK and their ongoing work.  Click here to donate or get involved.
Posted by Brazen Princess at 9:44 PM