This is a re-post (with additions in red) from an earlier post.  Today is my one year anniversary of being abstinent from sugar, flour and alcohol. 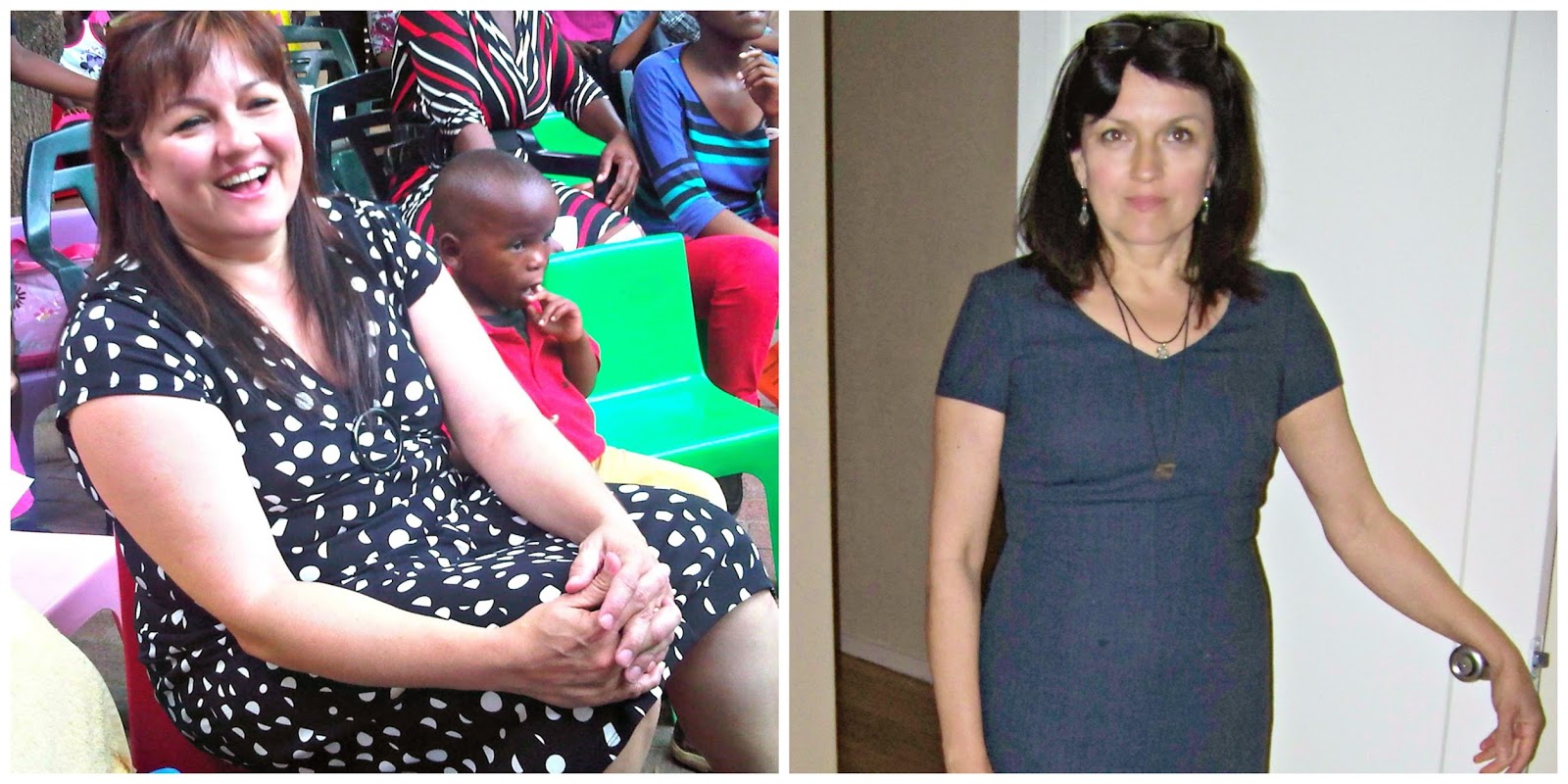 I remember the moment I realized I was fat.  It was a rude awakening to hear Dave Lamb infer it on “Come Dine With Me South Africa” and I was blown away by his cheekiness.

I was in a room full of people who were watching the airing of the TV show and cheering me on, even though we all knew I hadn’t won.  At the very end of the show I declared “It’s over!” to which the narrator said “It is now!” as I laughed.

We have a saying in America – “It’s not over until the fat lady sings.”  I was laughing my melodic laugh, a song on most other days – Most other days where I’m not called fat on nation-wide TV.

Mario had been in one too many of these situations and it was no-win for him.  He could see I was hurt and just smiled, encouraging me (as did everyone else) that it was a joke about my laugh, not a crack about my weight.   Somehow I got over it, but it always stung  every time I re-watched the episode.  After all, I knew what the narrator meant.

Even after the Come Dine With Me airing, I didn’t change much.  After all, my husband loved me madly; my friends all supported me.  My family was (as always) very supportive of me and wanted me happy, no matter what.  Weight wasn’t important to all of them.

The truth was this: I was overweight.  My husband’s opinion would not change that.  Neither would my family’s or my friends.  After moving back to America, I had to get real with myself.  My personal trainer stayed behind in South Africa and I was at a crossroads in my life. I had to get the weight off -once and for all.

I’ll keep it off, God willing.  I can beat the patterns that got me there in the first place.  I have the ganas, the desire to beat back the death that used to live in my old brain.  I am being transformed; restored.

It all started with a few truths I had never been ready admit to myself until April 22, 2013.  I wanted to share some powerful truths that caused the change between my ears ; because that’s really where I’ve lost the most weight.

I was overweight by anyone’s standards.  I’ve never put a lot of faith in the BMI charts, but they are a good place to start in determining if you are overweight.  A healthy human adult should weigh a certain weight for the height that they are, unless they are a body builder or a gymnast.  I was neither.

I was overweight on most days, using most scales, during every season.

It was because I ate whatever I wanted – when I wanted it.

I had rules for my overeating and they made sense to me.  I would overeat at parties, on special occasions, on Sundays….  My permission slips to overeat were only surpassed by my “morning-after-regrets” and my disbelief in what the scale said.

I refused to believe that I had a deeper problem – a terrible feeling of never having enough.  Overeating was only part of the problem.

2.  I learned about food and the power it had over me.

A person who overeats usually has other health concerns.  I had chronic asthma and took my inhaler wherever I went.  I had antacids at my bedside, in the kitchen and near the TV.

When I decided to follow an eating plan that fed my body instead of my taste buds, I began to nurture a new Janet who lay dormant inside of me.  I watched movies on nutrition.  I shopped for organic produce and fresh whole foods.  I started paying attention to which foods satisfied me most. I measured my portions and became truthful about my serving sizes.  I ate three meals a day and I was honest with myself that that was enough.

The first few weeks I was “hungry.”  Truth?  I was coming off white sugar and white flour.  I was an addict to both – and my addict demanded that I get a fix.  An addict’s least favorite word is no; so I felt my body rebelling by sending signals like “I’m hungry!”

Most of the time I was “hungry” I was tired -  I needed rest.  I tried to lay down every time I was hungry.  It was excruciating, but I did it.

And then I realized I was an addict, and I was okay knowing that.  I had to start somewhere.

Alcohol is a food.  It goes into your mouth and is processed by your several systems that keep your body moving.  When I decided to be honest with myself I that included that I would have to be honest about everything that I was ingesting.

I suddenly was confronted with addictive patterns that didn’t belong in my life.  I had been using food and alcohol to tranquilize my head and heart.  I never processed the pain that was causing my compulsive patterns.   Food I couldn’t eliminate, but alcohol I could.  I gave up the best red wine, the finest martinis and said hello to water.  Tea.

And I still haven’t said goodbye to Diet Coke.  A friend who has watched my transformation up close suggested that I watch a documentary on aspartame.   I groaned, knowing she was right.

4.  I had to process sources of pain that caused behavior I didn't want in my life.

If I had to be honest and weigh and measure my food, AND give up the hooch…. I had to begin a journey into the center of my soul that needed to be repaired.  The journey is exhaustive- and exhausting.

Still, it’s better than the lifestyle of plastering all the wounds without paying attention to why they are there.
The funny thing about wounds are that they cause behaviors.  Limping around, favoring  my weak sides, being grouchy when I am tired are only physical signs that something is wrong.  The real wounds people have are deep inside and most of us (if we are honest) don’t have the time to take care of them, or we don’t know how.  Some of us have been taught that if we only believe … if we only have faith that our wounds will heal.

I have learned that I must participate in a lifestyle of taking care of my wounds so that they really heal.  If I do this, I will less likely hurt others that I care about.

My restart included a lot of honest, humility and reflection.  I had been living a life that discouraged looking within too much.  I had to give myself permission to tend to my own wounds; and I am in process.

5.  I had to be accountable to someone safe.

What would I do without friends?  I have so many who are lovely and loving – they genuinely care about me.   One of my friends offered to be my “bullshitometer” on this journey.  I can squeak past my old friends with my old patterns, but not her.

She had recently gone through a similar journey herself.  Her journey began with a similar moment of awakening and she was confronted with painful patterns in her own life.  Because of her journey, she can relate to mine.  We both are becoming “filled with sanity” little by little.

Because of her, I can be honest about my deep emotions and my food battles.  Even sobriety  and self-awareness can’t hold a candle to the beam of the truth that comes from a good friend.  She understands the truth behind the truth.

6.  I have rediscovered God.

Confessions of a missionary?

In all the years I say I “served God”  I mean this in the most humble way:  I had neglected my true love.  I had been busy doing good things and forgotten about my love.

My rediscovery has been very personal; very private, but very real.  It hasn’t come with bells and whistles, but with love.  I have had doors open with grace, things drop off of me with love…true love.

I get shy talking about this, mainly because it is such a personal thing of how we know God.  I spent years running around doing things for Him, even in His name…but now I realize that He wanted only me.

7.  I have practiced gratitude.

The antidote for the poison of “not enough” is gratitude.  I have learned to be content with slow progress and minor victories.

While I haven’t had the mounds of pizza and Mexican food that I swore I’d have upon my return to my home country, I have been grateful for raw and organic foods that abound here.  I am grateful for a smile or the sunshine.  I have to remind myself that inhaling and exhaling are gifts I’m not entitled to.  I have chosen to love things that before I would complain about.

I adore raw red cabbage.  I love raw cauliflower.  I am grateful for beans.  I have a long list of things I cannot believe are mine.  I have to say it over and over again several times an hour.  Thank you, God!  I am grateful.

The journey has just begun, but I can tell you this:  It has been three months since I started a journey of being nice to myself.  In those three months I have lost thirty pounds (13.6 kg’s) The new count is 50 pounds - or 22 kg's.  I have a graveyard of unused inhalers, I don’t even know where Mario keeps the antacids and I haven’t washed a martini glass for three months. I have not had a drink of alcohol in a year.  Praise God!!

Instead of feeling deprived, I feel free.  If I were honest, the best reward is being free.

It almost makes me laugh.  And now no one can say that the fat lady is singing.
Posted by Brazen Princess at 1:15 PM