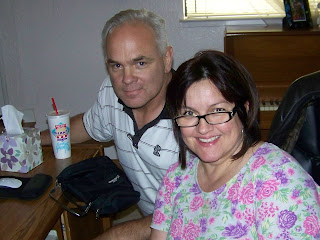 In the last few days we have landed on our feet in the USA, after six years living in South Africa.  We have to find a car, a place to live...and ourselves soon.

Before we left there are some things I was supposed to get done. One of them was finish editing my manuscript for Treasures in Diepsloot – making it lose weight from 138,000 words to 120,000.  In true Janet fashion, I couldn't meet this "weight loss goal."  The manuscript came out at 123,500 words.

Now, in the midst of all of this change I have to write a bio for my agent.  For those who have never had to write one, it is a description of myself and my experience with writing.  It is supposed to sum up who I am and show off my personality.  It is (for writers) the most annoying and challenging assignment that there is.

I don’t think she wants a synopsis of my full writing history.  It began in St. Bernard’s – the Catholic school that championed writing and demanded lots and lots of it from its students.  It also championed reading and required us to be proficient in both.

My experience in St. Bernard’s was that I was good, but there was always someone better.  I wrote stories that were fun and funny and made me laugh as I wrote them, but when it came time to reading them aloud no one laughed at all; only me.

Donna’s stories, by comparison, were well thought out and free of the starts and stops that mine had.  The whole class was amused at her writings and so was I.  I had to admit it – she was better than me.

I eventually finished with St. Bernard’s and moved on to Tracy High, a school with many, many, many good writers   I took every English class that they had to offer and I loved each teacher – back in the day when teachers were allowed to teach.

Leo Schools, one of the teachers who influenced me, noticed my giftings.

“Yeah, I have that hyperactivity thing,” I answered.

Leo looked at me seriously and shook his head.  “This is nothing to joke about,” he said.  I respected him a great deal so I slowed down ... and my writing improved.

From there came Stanislaus State, where I continued to kick ass and be surrounded by gifted writers; from there Consumnes River College where the same thing happened again.  So many good writers; how would I stand out?

Now that I have written my first novel, my agent will submit it (with my bio) to publishing companies.  Here are the guidelines:

Here are bios I have written about myself.  Want to vote to tell me which one you like best?

Posted by Brazen Princess at 10:45 AM

Email ThisBlogThis!Share to TwitterShare to FacebookShare to Pinterest
Labels: creative process, how to write a bio, writing