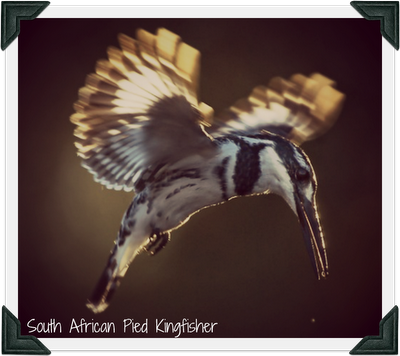 The heart, my grandmother used to say, was like a scrapbook.  It held pieces of memories that together made up a wonderful collection of things that made your life unique to someone else’s.  I have learned, over the past few years than my heart has several scrapbooks, making me feel either rich or disjointed, depending on what kind of day I’m having.
In my South African scrapbook, I have a new page.
Today I turned over my calendar to August (yes,I still have a wall calendar, and I still keep appointments on it).   The picture gracing the top of August was the South African Pied Kingfisher, perched above the water, ready to strike a fish.
The Pied Kingfisher is found in all of the South African game parks we’ve visited and being a noisy bird, it is hard to miss.  They have black and white feathers and feed by hovering over the water to see motion from an unsuspecting fish before diving (vertically, bill-first) to capture their prey.  It literally takes my breath away to watch such art and beauty in one thing.
South Africa has a way of taking your breath away at the oddest times. 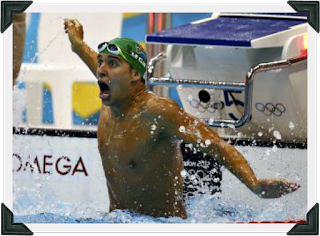 Yesterday, at the London Olympics a South African swimmer named Chad le Clos shocked everyone to beat American Michael Phelps in the men's 200m butterfly, taking South Africa's second gold medal of the 2012 Olympics.  It was an absolutely amazing moment.   Le Clos had the odds stacked against him, with Phelps leading the race for most of the way. BUT  the 20-year old managed to snatch the win at the last second and on the final stroke, shocking everyone – especially Phelps and himself.
"Phelps is my hero and I love the guy. To beat him, I can't believe it,”he sputtered during an interview, in tears and disbelief. “You don't understand what this means to me. This is the greatest moment of my life!"
The only thing more surprising than that moment of his win was my reaction to the awards ceremony.
I love America.  I love The Star-Spangled Banner and get teary eyes when it plays – ESPECIALLY at the Olympics.  This morning to my surprise, instead of pouting about Phelps’ loss, I teared up hearing South Africa’s national anthem, Nkosi Sikelel' iAfrika.  The only one crying more than le Clos on the podium was Mario and I as we watched it, touched by the swimmer’s incredible feat and added humility... and a strange pride in our adopted home country.
Inside of me, I was that Nkosi Sikelel' iAfrika had evoked such a reaction.  That place belonged to The Star Spangled Banner, I thought.  The anthem took my breath away, and I was proud of deClos like he was my fellow countryman.
Tomorrow I fly to the States – a rich and lucky woman going to see my granddaughter, Alannah,  turn one year old.  I still remember her birth – and in my scrapbook, its picture is one I turn to often.  I go back to my home with love and eagerness.  I will suck up the August and the Mexican food and my family like there’s no tomorrow.
But know this: there is a new page in my heart, and it makes me tearful and proud to be a permanent resident of the great country of South Africa.
The sound is poor, but to see the award ceremony, click here.
Posted by Brazen Princess at 10:20 AM