Sometimes we believe in reasonable predictions, especially the ones that make sense.
If I hear a weather report (given to me by a licensed meteorologist) that says it will rain tomorrow I will make plans to carry an umbrella.
The problem with predictions is that they make us listen to the voice of the predictable.  Our lives are filled with the unpredictable, unexpected events that make life feel like a roller coaster.
One of the most recent of the unexpected events was when Mario’s younger brother, Anthony, was diagnosed with non-Hodgkin lymphoma in June.  It was in its advanced stages and characterized as “highly aggressive”.  Mario immediately flew out to see him, visiting with him and hanging out, and saying awkward goodbyes, knowing Anthony was not expected to live until Christmas.
How do you say goodbye to a brother who is younger than you?  How do you watch him --from a distance – physically struggle with the beast of lymphoma?  All you can do (from a distance) is pray... and we did.
The announcement of Renee (Anthony’s only daughter) expecting her first child (Anthony’s first grandchild) was a huge blessing.  In the blessing was a hidden dagger of knowing that Anthony might not survive long enough to see the birth of his first grandson: March.
Of course we prayed for a miracle, but we also listened to doctor’s predictions.  We grieved, watching the disease progress, lately seeing the once-strong Anthony move into hospice care.   March seemed an eternity away.
Every morning for the past month we have woken up and checked email to see Anthony was doing...  in truth, to see if he died.

In one email from Shirley (Anthony’s beloved wife) was a picture of Anthony.  The drastic change in his appearance from June to now was astounding, and we grieved for this...together and all alone at the same time.
Last month, I blogged about the grief of the past days with Anthony (click here to see it). It affected Mario and I differently, but together we experienced sleeplessness.  We slept fitfully, only hours at a time.

Saturday morning, Mario came into the room with a printed email.  I expected the worst, but as he kissed me, I could tell Anthony had not passed away.
“What’s the matter?” I asked, groggy but alarmed at the same time.  “Is it Anthony?”
“No,” Mario said, handing me the email as I sat up.  “Renee had her baby.”
I (in the vernacular) flipped.  “WHAT?? IS SHE OKAY??  IS THE BABY OKAY??... Does Anthony know?”
“Not yet.”  Mario smiled and looked happy, so I calmed down as I reached for my glasses.
In the foggy black and white I read an email from Shirley:
Sat, Dec 10, 2011 at 12:41 AM   (The times are South African, so subtract 9 hours to figure the USA times – and it will explain why we were sleeping)
Ø  “Renee is having a C-section right now to deliver their son. Ultrasounds show both Josiah and Renee are strong, but her cervix opened and the amniotic sac prolapsed and Josiah's umbilical cord is positioned between his head and the cervix. The safest decision for delivering him without causing oxygen loss or anesthesia issues on his underdeveloped lungs was to give a spinal to Renee rather than an emergency c-section under general anesthesia. He is only 27 weeks, 4 days along so he will need incubation, on a ventilator and spend months in the NICU if he lives, Lord willing. I have not seen Anthony today since this started this morning and then she was airlifted to Banner Desert Hospital (1/2 mile from our house)where there is a Level 3 Neonatal Intensive Care Unit.  I will tell him when I know the outcome. We are waiting for word. Please pray.”
Sat, Dec 10, 2011 at 1:50 AM:
Ø  Little Josiah was born at 3:03 pm and both he and Renee and Josh are fine.   Josiah went to NICU but doctors were impressed with his vitals. Praise God!
Ø  Renee, Josh and Baby Josiah are doing well.
Josiah Michael Anthony Ferguson
born 12/9/2011   (December 9, 2011)
2 lb. 7oz. 14 3/4 in long   (1.22 kg’s)
When Mario woke that morning, he was able to see that Renee was okay, the baby looked healthy (although very premature) and he emailed back, in a semi-dumbfounded state:
Ø  Wonderful Shirley... have you been able to tell Anthony yet?
Blessings,
Mario and Janet
Shirley wrote back soon afterward:
Ø  I told Anthony last night and showed him pictures. I am in the process of getting him over there to see him in next 2 days, hopefully tomorrow . It has been cleared with the NICU today but I have to ask the on-call hospice doctor to write the order allowing him to go. Until it is cleared with the doctor, and time frame agreed upon so Renee or Josh can escort us up to NICU, I won't tell Anthony of the opportunity to see his grandson Josiah, until it is 'a go'. Why disappoint him if it isn't approved?
Anthony really wants to see you Mario so I told him he needed to live long enough, then!! It might be necessary to come early if possible -play it by ear.
Love you both,  Shirley
Here is where I stopped reading.  The first thing I had to do was to get up and see the pictures that were online.
I was amazed.  Amazed and surprised and dumb and joyful.  How amazing... how amazing that I was wrong.  Anthony is alive to see his grandchild.  How amazing that Josiah is breathing.... How amazing.
I stared at the computer until I finally broke out of my trance and turned around to see Mario.  We hugged and kissed and celebrated.  It was a miracle.
In the next few hours we told anyone that would listen.  The next day at church we shared with anyone who would listen.  Many knew Renee, since she had lived with us four years ago here, for awhile.  Everyone seemed as gob-smacked as we were.  It was the most incredible news...


Until I woke up this morning...
The image of Anthony touching his baby grandson made us both cry, and the caption underneath the picture of him, written by Renee’s sweet husband, Josh, was even better: 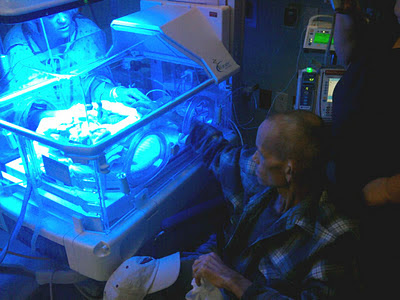 Ø  Wow.  Kinda hard to see with the Ultra violet, but this is Renee's father Anthony who was told he may only have a few weeks to live. So despite his best efforts, he still lived to see himself become a grandfather! God is good.
Shirley’s caption (she is out of focus in the background) was :
“Josiah at 45 hours old a brief moment with his mask off while they adjusted it!  Anthony and I were able to touch him in the incubator earlier today!”
Even better...Mario made arrangements to fly to Arizona right after we land on Friday.  He will go without me, but will get to see Anthony, should God keep him until then.  Through the combined frequent flier miles of us and our generous son, David, the flight is “free”.
Yes.
God is good.
Predictions are not guarantees.  Sometimes they fly in the face of faith.  Thank GOD that He is bigger-- He is faithful when we are faithless.
Can I hear an AMEN!!!???
Posted by Brazen Princess at 11:22 AM