When I fell in love with Mario, I fell hard.
Anyone who has a true love knows the day that you realize that it is real; he's the one; this is it; fill in your favorite cliche.  The truth is, it all isn't a cliche.  It was the most real thing that ever happened to me.
As with most love stories, we had issues. I had just come out of a live-in relationship that was very passionate, but dramatic.  I was trying to raise a young son whom I protected from life obsessively, and meeting the love of my life wasn't supposed to happen so soon after the separation.  But it did.
Mario had also been married before to a really nice lady named Cathy.  Every account of Cathy (even from Mario) was that she was a typicial California girl (complete with long, blonde hair and blue eyes) and a sweetheart.  Even Mario said that the divorce was "his fault", although in the re-telling of the events, from my perspective they seemed better suited as best friends, rather than man and wife.
There we were, two of us, single parents to great kids, meeting for coffee at a diner for wonderful, emotional connections where I gazed across the table into his beautiful brown eyes and listened to the wisest, most beautiful person talk about building a future.
He had a plan.
If he ever did get married again, he said, it would be to his true love, his Alice.  Mario then explained to me about the relationship that his father, a Broadway actor named Chev Rogers, had with his wife (Mario's "step-mom") Alice Evans.  Alice was Chev's refuge in the storm of life, but was also the most exciting person in Chev's life.  She was multi-talented, beautiful, and could sing... and break glass.  She and Chev had met on the National Tour of Sound Of Music and were inseparable.  Their lives were one dream after another... and they adored each other.  They played hard, loved hard, fought hard and weren't afraid of truth and hard times.     Yes, if he ever married again, it would be to his Alice.
I remember feeling threatened by the comparison.  How could I be like the Alice he was looking at as the epitome of true-love?  A Broadway Dame with a big voice, a gorgeous face and head-shots that changed with each show she was in.  I was a recovering drug addict and single mom, vulnerable and insecure...and desperately in love with the "perfect" Mario.
I went home once from one of our coffee shop chats and wrote a poem I called "Your Alice".  The next day at work I gave it to him:

Looking in your face I see
The eyes of one who’s meant to be
I hear you speak of life and love
The face of one you’re dreaming of;
That things will just fall into place
With one...perfect...face...
What face?
What Look?? What Shape?? What Kind??
Tell me, and I’ll make it mine.
How I wish that you could see
Your Alice come to life in me,
The joy in what you’re speaking of
I long for, too: undying love.

Mario later spoke to me outside.  "Your poem," he said, with tears in his eyes.  "Where did you learn to write like that?  The last line...it's just how I feel."

I was flooded with relief...and love.  From there on in, we made plans toward marriage.

This still didn't mean I couldn't feel insecure.  Talking with Cynthia, Mario's mom, I thought would give me some balance.

"She's wonderful," Cynthia said, after a long drag on her cigarette. "And he is horrible. Horribly hard to live with, just the most ego-maniacal man ever born "  Cynthia was honest and bold and truthful.  I couldn't believe her version of both of them.  First of all, Chev, as Mario described him,  was larger-than-life, and an artist.  Mario never exaggerated or lied.  Secondly, I had never heard an ex-wife speak so well of the new wife.

"That's because she really is an angel," Cyndi, Mario's cousin/sister later told me.  Cyndi had met Alice on numerous occasions, and was one of Alice's favorite people.   "She is beautiful.  One of my favorite people in the whole world."  Cyndi also told things like it was, and she loved me, so  I felt a little more comfortable by the time Mario and I boarded a plane bound for NYC to meet her (and Chev) for the first time.  I was so nervous, meeting the "new" in-laws... and Broadway stars to boot.

Arriving in New York City, June 1987,  at nearly midnight, we had to go through a wide-awake (and scary) Harlem to get to the West End of Manhattan, where Chev and Alice lived.  I was so nervous I thought I would break in half.  Finally we arrived and Chev answered the door looking every bit the Broadway star he was... and I'm sure capitalizing on my sheepishness.

"So this is Janet," he said, in a booming, deep voice, stretching his arms out for a hug. I smiled, and hugged him, hitting my cheek against a plastic stop-watch  hanging from his neck.  We turned made our way through the kitchen and into a wide, open living area with a grand piano and crown mouldings and a hanging chandelier.  I scanned the room for Alice... who I found out was in bed.  How dare she??  After all, it was only 12:30... and I'm sure she was used to partying until dawn.

While Chev offered us drinks, Mario insisted we put the boys down to bed, and we began the process.  While we set up beds, I saw more "realistic" pictures of Alice around the room.  They looked like a normal couple, not so much the larger-than-life version I had made them to be, but rather like my own mom and dad, with family, baby pictures, holiday shots.


Somehow I slept that night, and when I awoke, it was to Mario stirring to go to the bathroom.  He walked outside, and was greeting by an excited yell, followed by a laugh.  I could hear the hugging from where I was. Mario giggled and Alice continued a melodious laugh... one that I was strangely jealous of.

I got out of bed, got dressed, looked for makeup, gave up and then walked outside.  There she was.  She was...so small.   Somehow she wasn't so "Broadway sized", she was even smaller than me.  She turned around and gave me the most disarming smile I had ever been greeted with.  I blushed, and hugged her, as she said "So this is her."

Throughout the week, Alice's beauty became real to me.  She became (in my eyes) less perfect than I had made her, more warm and real...full of love for most everyone we talked about.  She asked real questions about me, about my family.  And she loved my poem.

"Honey," she said, in her gorgeous voice, "your poem is a treasure.  I wrote it down here in my journal, see?" I smiled, so humbled that she would save this.  "I am just so glad Mario has met you.  He needs a woman who really can see him."

Saying goodbye after the week was over was a little sad, but I was ready to get back home. As she hugged me, she whispered "And you, my dear, are a delight!"  She meant it.  It meant the world to me, and I thought about her the whole trip home.

At the end of the year, MArio and I did get married.  We had our own passion, our own drama, and our own obstacles we somehow overcame.  The following year we had a daughter and named her Alicia, the name Chev called Alice.

Over the years, Alice proved herself to be a woman who would love us without question.  She would be at the end of the phone to bless us, and to encourage us in sad times and celebrate the happy times.  She mourned with us as Cynthia succumbed to cancer in 1991.  When she and Chev finally decided to divorce, they parted with peace and blessings, but we also mourned together.  She showed us how to hold each other in our hearts when separated by distance, and she became to me who she was to most others that knew her: the picture of what a loving woman should be.

Year after year, she became more a part of our own hearts, opening our ways of thinking; encouraging our growth.  In 1997, ten years after we were married, she and her new husband, Pic came to visit us in Sacramento.  During the visit, Mario and I had a huge fight and I later talked with her about it.  She listened, gently cooing, and finally saying.  "Honey, I trust you both so much with each other that I know you'll work it out."

In 2007 we permanently moved here to South Africa.  Our jumping off place was New York City, in Alice's Riverdale apartment.   We said goodbye, promised to write (we do) and promised to saty close (we are).  Through any distance, we have an understanding that we are always there for each other, and each others' trusted confidantes.  She is a delight and a treasure.

Today is Alice's birthday.  I cannot begin to tell you how blessed we are to know her.  To have her in our lives means that we have a woman who values us and accepts us regardless of all our shortcomings.  The woman I met in 1987 and was frightened to know has turned out to be one of the deepest human blessings in my life.

The funny thing is, most people who know Alice say the same thing.

That's the mark of a life well-lived.

Blessings and love, dear one.  We love you. 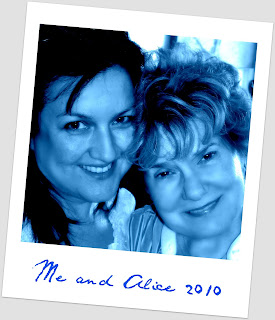 Posted by Brazen Princess at 9:57 AM