I know I'm not supposed to dwell on the place in my heart that is homesick. Still, I can't help thinking that tomorrow is the American holiday we call "4th of July"- or Independence Day.  It celebrates an act most people have forgotten - the signing of the Declaration of Independence.

The thought of it makes me cry...  As a former teacher (actually, is there any such thing?) I love the story of the Fourth of July.  It's a good one that reminds me why American are the way they are.

England had established "the colonies" - 13 separately governed provinces on the eastern seaborad of North America, primarily made up of citizens of England.  Their desire to enlarge the British Empire was multi-fold: Increase revenue,  grow tobacco (and other crops not suitable for England's wet climate and limited space) and establish "The New World" as Great Britain.  At that time, the monarchy owned most of the world.

Years later, becoming increasingly unsatisfied with the Mother England and the madness of King George, rumblings of a revolution were commonplace in Boston, the unofficial capital of the colonies.  The Boston Tea Party (a revolt against a tea tax) showed how different the colonists had become from their "mother".  Dressed as Indians in war paint, a group angered Americans boarded a ship that had just arrived from England with its supply of precious tea to be sold in local shops.  The men threw the case of tea overboard, making it undrinkable (even for Americans) and a loud and expensive message was sent to England: we will not pay taxes and we will not be governed by you.

What this led to was British occupation - King George's answer to rebellious children.  The British officers made an example of protesters by summarily "quartering" them, and forbidding anyone suspected of insurrection against the British of a trial by jury. While no one can deny the obvious tensions and full-on skirmishes between Americans and redcoats (called "devils" by the residents), the beginning of the American Revolution is said to have begun with a single shot - the "shot heard 'round the world" on a simple green in Lexington, Massachusetts - April 19, 1775.

The Declaration of Independence was signed in Philadelphia on July 4, 1776, by the "Continental Congress" (a group of elite landowners and learned men who  formerly had strong ties to England) the "war" had been going on for a year all over the colonies.  Thee men, at the risk of losing everything they had and certain death performed high treason by signing a document that they sent to King George "declaring independence" from England.  It was unheard of - a thinking man's gauntlet.

In its words, the declaration spoke the famous beginning, declaring war for noble reasons:


"We hold these truths to be self-evident, that all men are created equal, that they are endowed by their Creator with certain unalienable Rights, that among these are Life, Liberty and the pursuit of Happiness."

I love the story.

The story tells of us being born out of a struggle.  Our national motto "E Pluribus Unum"  literally means "Out of Many - One".  So the holiday is full of American flags and fireworks that simulate the missles and bombs of war - all to show that we are all separate, but equal.  All individuals, but all American. 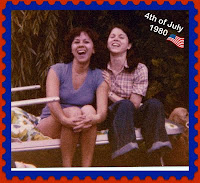 After a long, hard war (and helped by the French), America won the war by a surrender of General Cornwallis in 1781.  A long time has passed since these events, but every Independence day we are reminded of the beginning of our nation.

It will be a holiday of family to most people in America, one celebrated by summer fruits, fireworks, beer and bar-b-ques. Families and neighbors  provide Americans with Fourth of July traditions that are sacred to us.

My grandfather (a hardworking Mexican man who had seven children, married to the best woman I have ever met in my life, and built a house made of bricks) used to wear a full length apron and a chef's hat on the Fourth of July.  He'd roast chicken over the fire in a sauce that I haven't tasted since he died... which was served with a pasta dish my grandma called fideo (tears) and her famous strawberry shortcake. 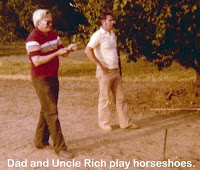 The men of my family (my dad and uncles and grandpa) would sit outside in the landscaped part of my grandparent's yard and drink beer (I never saw anyone drunk) coffee and water, watching my grandpa bar-b-que.  They would occasional throw in a game of horseshoes, where, I noticed...only the men would play.

The women were all in the kitchen, chatting, laughing, cooking and talking in half-Spanish/half-English chatter, depending on who was listening.   Their preparations for the family meal would be the distraction to the busy discussion that kept them all connected and happy.  No one (except me) seemed to notice the obvious division of the genders...or if they did, they didn't mind it.  The kitchen, in all of its whir of activity, was the greatest part of the house.  The massive stove that always leaked gas was a cornerstone of my childhood, and one I am sure I will never see again.

At the end of the day we would get folding lawn chairs and watch fireworks, which were set off nearby, at the airport.  The fireworks show was always something that I loved, but hated the mosquitoes that came with it.  In those days, no one bothered with repellent.

The Fourth became a family holiday in our own home, with fireworks being set off at the park very close to our house-- on July 3rd (we were the warm-up to the real show to be set off at Cal-Expo the following day).  From our back windows we had had the best view, and watched from our "Mary Poppins"  house while our kids were in their pajamas.  It wasn't until they were older that I dared to venture out to the park on the corner with my precious, impressionable children, fearing drunken heathens smoking pot and being angry with one another for the stereos that were blasting from the cars.

What we found instead was our neighbors, mostly sober...who were in a summertime good mood and ready to enjoy a small amount of time together.  Strings of ice cream trucks lined the park, where every year Mario broke down and bought the kids their favorites before the show.

I can't begin to tell you the preciousness of these memories.  Our neighborhood, in South Sacramento, was multi-cultural and middle-class.  The feel of the gatherings were crowded, warm,  American sharing...and my kids (tanned, beautiful and in shorts) thrilled to be outside so late as a family.  Our walk back to our house was so wonderful, noting that our prime real-estate was only a block away!!

The fourth was usually spent with Anthony and Shirley, Mario's brother and his wife, and their family in Moraga in the beautiful East Bay.  Shirley (a gourmet cook) would grill beautiful, succulent, gorgeous blue cheese burgers dripping with fat...and vegetarian burgers for me (every party has a pooper that's why we invited you, party-pooper).  Our conversations and board games led to a walk to the golf course where the wealthy East Bay residents sprung for a fireworks show of note - and the same mosquitoes showed up.  By that time repellent was my friend and I coated myself with "Off!" -- and I was still was munched by those evil insects.

The memories are a part of why I love this holiday.  Americans pride themselves as being so diverse- a land of many cultures and even more individuals.  The one thing we have in common is that we are Americans, and are free from an oppressive government.  Liberated from the greatest world power with the most incredible militia by a newly formed army of farmers and landowners trying to hold everything together in the midst of change.

It marks us still, we Americans.

We believe that we can do anything we set our minds to.
Posted by Brazen Princess at 4:39 PM