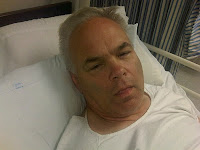 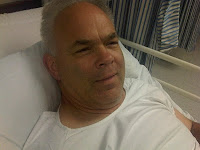 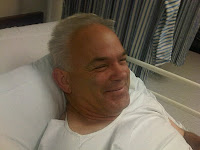 There I was, laughing my head off in a public place (the Discovery lounge at Life Fourways) looking at the pics I just took of Mario on his Blackberry.  The cleaning lady kept passing me, smiling...not quite sure what I was up to, but trying to catch the spirit of joy that was on me.

Mario being wheeled out of his hospital room.  Mario wheeled into the pre-op room.  Mario looking sick (“Sell it, babe! This is for posterity!”)  Mario laughing…The pictures make it  look like we were having fun while he waited for surgery.
The truth is, a hospital is the last place you ever want to come if you want to have fun.
In the last three weeks I have become an unwilling subject-matter researcher of kidneys and the urinary system.  I can sketch the whole thing and tell you where the stone in Mario was, and why it was the hardest area to have a kidney stone.  I can tell you what a stint is and why its placed in someone’s ureter and how it will help the kidney drain properly; what it’s made of and how it gets there.  I have learned what contributes to stone formation and why they form in men more than women...and so on.
Because of Mario’s stone and its subsequent pain, I have learned the power of the urinary system and become familiar with how its malfunction can threaten the happiness of a happily married couple.
This morning I woke up thinking Mario would have the awful stint removed from him and be driving himself home tonight.  The doctor looked at the CT scan and saw it being clear.  I saw this as cue to celebrate a miraculous healing.  The doctor, it turns out, saw it as “a good start”.  My elation was drowned  by a big, flopping wave of reality.
It turned out that even with the CTscan, being clear, it wasn’t the only factor to be determining whether or not Mario would go home today or tomorrow or the next day without a stint or without  follow-up surgery scheduled.  I wanted a supernatural healing of kidney stones- a testimony of God’s goodness, and I wanted it today.
After the blood- work was done and analyzed,  Mario’s early morning conference with his doctor didn’t give him much hope for the outcome we were praying for.  His next few sms’s to me were not hopeful…in fact they reeked of discouragement.  There were other things the doctor had to check during surgery, including the possibility of the other kidney having problems, renal abnormalities and the ever-fragile ureter being weakened by the recent trauma.
I didn’t want to think about the possibility of another surgery in two more weeks.
I was deflated and angry as soon as I walked in to Mario’s room.  He saw it as soon as I came in.
“What exactly did he say?” I asked, after plopping down all of my stuff.  Mario looked up at me and raised his eyebrows.
“Hi,” he said.  If I’m in a bad mood and don’t greet Mario properly, he’ll make sure I do.  This does nothing to help my mood.
Instead, as Mario tried his best to recount, I flipped furiously through his medical chart, double-checking his blood work results.  I noticed the shoddy I.V. drip that some new nurse did, listened to the familiar complaints about sleep loss and pain....
How much longer would this all go on??  What would it take to stop the pain, the medication, the trips to hospital?  How many more squirming nights would we both have??
In the deepest point of frustration, my friends, Rebecca and Denise walked in the hospital room, with one intention: to pray.
Mario and I both melted (gave up) and accepted prayer, since not only hope was dashed, but our hearts seemed to be as well.  It was a welcome relief.
Sometimes prayer is a nice gesture, and other times, it is a funnel for the Holy Spirit to fill every part of you.  This time it was the latter.  I wept in the presence of God, surrendering every emotion except complete exhaustion.   Tears, like the kind that a five-year-old cries when they need a good night’s sleep poured out of me. I wept in relief, in surrender, in desperation.
The prayer lasted awhile, but I can’t say how long.  It was necessary for me to be completely real with who I was: the most powerless piece of this puzzle of healing.  As much as I hate that role, it is mine.  I am powerless, but also having a powerful and graceful Father who cares even more deeply for Mario than I do.
Rest.  Peace. Calm.
Faithful to provide even the most undeserving His grace, we thanked God for His presence.  It was the most amazing gift we had today. As the hours ticked by slowly, we read, rested.  We visited with our lead elder, Craig (who told me to stay away from my own research)!  By the time he went into surgery I could honestly say I was relaxed.
Mario was prepped for surgery while I snapped shots of him clowning around.  The Blackberry shots were now funny to see, and I loved the fact that I could now laugh at them after the disappointment of the day.  I didn’t know what was going to  happen or how he would  feel when he came out, but I did rest and trust God,  my Father, who knows all these things.
I went to the coffee shop to buy Mario a sandwich “just in case” he might be hungry later on.  When I went back up to the room to drop it off, I headed back for surgery immediately.  I started to get onto the elevator,  only to be greeted by Mario being wheeled out of it, by two nurses, on his surgery bed.  As soon as he saw me, he started to cry.  I felt my face turn red and tears start to come.


“What happened?” I asked the nurses who were pushing him.
“He did great,” one of them said.  I had heard that before.
Then Mario said “They took the stint out.”  His face was filled with relief, love, thankfulness...and I suddenly got it: these were happy tears.  The stint being removed completely was the one scenario the doctor said would not be happening today, barring a miracle (his words).
“No stint.  No Stone. No catheter,” the nurse said, smiling.  The statement said everything.


What happened to the stone?  Where was it?  What happens now? The answer to all three questions, as my grandmother would say, is "Sabe Dios" (God knows).
So many times I research the enemy, rather than rescuer.  I research the attack, rather than trusting in my secret weapon.
Today I am wow’ed by a miracle...and I would say “I’ll never doubt the power of God again!!”
But I’m 48...and if I had a nickel for everytime I said that... I’d pay for Mario’s surgery in cash.
Thank you, God, for grace.  I love you.
Posted by Brazen Princess at 12:58 PM